Will never letting my display go to sleep shorten its life?

In Mac OS X 10.9's System preferences > Energy saver, there is a warning that says:

Never letting your display go to sleep may shorten its life 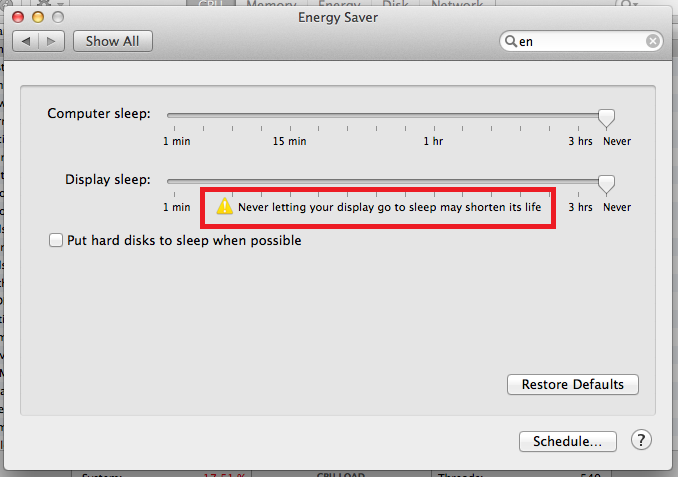 Why would not letting my display go to sleep shorten its life?

What monitors are effected by this warning?

Realistically most Mavericks-capable systems with built-in displays, other than the early aluminum iMacs and Santa Rosa Core 2 MacBooks, have LED back-lighting which isn't going to noticeably dim with age or be affected by on/off cycling.

If you're driving a CRT/plasma/CCFL-LCD monitor then you have option of increasing the lifespan of the display phosphor coatings (the back-light in the case of CCFL-LCD panels), but this comes at the cost of increased stress on the driving electronics of being regularly cycled on and off.

I think of it as the "lawyer's light bulb", or the equivalent of "objects in this mirror may be closer than they appear" [which I actually thought was a joke when I saw it for the first time]

Leaving a light bulb on 24/7 will shorten its life, as it won't last as many years compared to if you just used it an hour a day.
This is, however, a 'fake' analogy, as it will still last the same number of hours, minus 'damage/wear' caused by the switching process.

Switching it on & off every second 24/7 will shorten its life still further, as the power-cycling will eventually cause early burn-out.

The analogy applies to both CRT & LCD monitors. The more you use it, the shorter its lifespan.

The lawyers would like you to be aware that you can contribute to the extension of that apparent span by using it less.

Not the answer you're looking for? Browse other questions tagged hardware display .