What's with all the random folders in the DCIM directory for iPhone?

My photos are spread across 17 seemingly randomly named folders in my iPhone 5's DCIM directory.

I can't make any sense of this and it is quite painful looking through all of these directories to find the photo I'm looking for.

Why is my device doing this and can I make it stop? 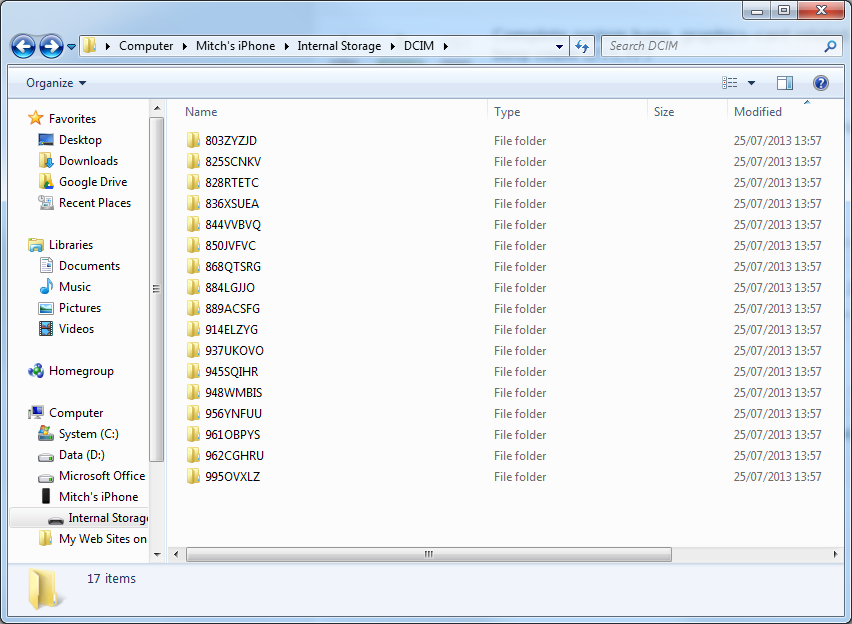 You will see all your pictures in order and it's easy to find the picture you are looking for.

These "randomly named folders" are consistent with the Design rule for Camera File system (DCF) that Apple and all modern digital cameras use.

From the Wikipedia article on DCF: (emphasis my own)

The filesystem in a digital camera contains a DCIM (Digital Camera Images) directory, which can contain multiple subdirectories with names such as "123ABCDE" that consist of a unique directory number (in the range 100…999) and five alphanumeric characters, which may be freely chosen and often refer to a camera maker. These directories contain files with names such as "ABCD1234.JPG" that consist of four alphanumeric characters (often "DSC_", "DSC0", "DSCF", "IMG_"/"MOV_", or "P000"), followed by a number.

My Sony digital camera creates a single 101MSDCF subdirectory by default, and I can manually create more if I wish, which it names 102MSDCF, 103MSDCF, etc. Whereas my iPad seems to create a folder for each 30-day period. (?)

If the iPad is mounted as a "USB mass storage device" then you should see this directory structure in Windows Explorer. However, if using another application or "protocol" then you probably won't. For instance, I can use Paint.NET (Windows) to "Acquire" photos from my iPad using the Picture Transfer Protocol (PTP) - using this method hides the underlying directory structure.

Your information is stored in files, but also in databases. There's a database somewhere that holds the metadata describing some event and bridging that event with the file location. To you it looks random: to the phone though, it doesn't care where the file is stored as long as it has an entry in the database.

Think of the database as being a type of "table of contents" - a page of information can live anywhere in the book and the reader might not care where, as long as they can find it.

In short, what you're looking at makes sense to the phone, and was never meant to make sense to you, because you're not supposed to be looking at it from this view. You're supposed to look at it through some other app (someone mentioned Photo Gallery - I don't know if that's true but it sounds likely).

I too have been rather bemused, trying to make sense of the folder / directory naming of recent months.

The folders were always oddly named, but it wasn't random - from looking at my various iOS devices in the past (of which I currently have three), all of them seemed to be working on some kind of predefined sequence in terms of the folder names served up (in my case) under Win Explorer in Windows 8.1. Each one of these 'folders' was named with an 8 alphanumerical character name, and would contain up to 1000 images, before moving on to the next one.

Then along came iOS 8. First of all, they seemed to be allowing predefined (by iOS) folders to get endlessly bigger than just 1000 pics. At one point I have 3500 in one of the folders. Then, either iOS 8.1 or 8.1.1 (I forget) changed things, so that pictures were contained in an individual folder for each month. On my iPhone 4s and iPad Mini 2, these are still running on a predefined title (i.e. they both use the same folder names compared side by side, so not random). On my iPhone 5c, every time I plug in my phone, the folders are labelled differently, so this is truly random it would seem. I concur with you that countless folders are being created; even if you only take one picture a month for 12 months, you'll see 12 folders for each of those calendar months (I believe).

My 4s, Mini 2 and 5c are all running iOS 8.1.2. I have no idea why the 5c is behaving differently; to summarise all are creating 8 digit named folders for each month of pictures, but only the 5c is doing this randomly every time I unplug and plug it back in to the USB port. As someone else said above, the iPhone uses some kind of light-SQL database to store and dictate all sorts of things, and I think the folders are generated 'virtually' from this, so there must be something weird going on in that DB on my 5c (and prob your device, from what you've described) that probably only Apple can answer.....

I hope in some way that helps, if nothing else to agree you're not the only baffled here! :-)

When I connect my iPhone 4s (running latest iOS 8) via USB to my WIN7 PC, I also see those random DCIM subfolders, which are changing their names (that's really weird!) every time reconnecting the iPhone to the PC.

The good news: I found out that every subfolder includes photos from a certain month only. However, the random subfolder file names (3 digits, 5 letters) do not correlate to any dates, which makes it hard to find the latest photos, e.g.

The bad news: Unfortunately I also don't know how to get rid of the given problem when using Windows explorer to directly access the iPhone photos via USB.

Interestingly for the same iPhone WIN XP is showing ALL the photos in a single folder, where ALL photos can be viewed and sorted the usual way.

Older iPhone 4 (which does not support iOS 8) also is showing all photos (having very different dates, especially different months and years) in a single subfolder.

Update 2015/10/06 (by Hardy): After updating to iOS 9.0.2, the DCIM folder is back to single and simple DCIM subdirectories, for example the Windows Explorer now is showing subdirectory 100APPLE for all photos up to IMG_0999.JPG, subdirectory 101APPLE for photos starting IMG_1000.JPG and so on.

THIS IS NOT RANDOM - I have this same situation my iPhone 5C running i0S 7.1.2. At first I thought it was random too, especially because of the folder names, but then I realized that every time you take a photo it names it the next sequenial number and each folder is a different set of 1000. One folder has 0001-0999, then 1000-1999, 2000-2999, etc. Because you've deleted photos you won't have all the numbers from 0001 to 0999, 1000 to 1999, but each time it starts a new set of thousands it's makes a new folder. Therefore you can sort by "name" and it will put them in numberical order and therefore in the order they were taken. Evidence: I just tested this by 1) checking each DCIM subfolder to see if each of them was from the same set of 1000, and 2) by taking a few photos and checking the folder and seeing if they were named in sequential order. There is one folder that seems to have images that I've saved from friends too. Why is it like this? I'm not sure why the folders have weird names, but I believe the archiving could have something to do with iCloud backup. If you replace your phone and load from backup it helps the phone not start back from 0001, but carry forward from the last number taken by the previous phone. How do I know it carries forward from the previous phone? Well I had my iPhone 4 replaced twice and then I purchased my 5C and I've loaded all of them from a previous backup and my photos have never started back to 0001. Also grouping them in thousands might help with less corruption during uploading and/or if corruption occurs it's less photos then if they were all in one file.

Those folders have never appeared on any of the dozens of iOS devices I've looked at the DCIM folder. Newer iOS seem to accumulate folders more readily so it's something you might need to adapt to.

If you want to see if this is the OS, make a full backup of the phone and then erase it using the settings app to erase all content and settings. At that point, don't restore the backup and just run the normal iOS apps and take a photo or two.

You should see the typical DCIM/ folder with just .MISC and 100APPLE sub folders. Then you can track whether a third party app or just an accumulation of various photos is causing the folder structure to grow.

Apple appear to have gone for a more sane approach on iOS9 - the folders are generated at a far lesser frequency and they are sequentially named so you can easily navigate. Updating to iOS9 on this device restructured my folders shown in the original question to the below: 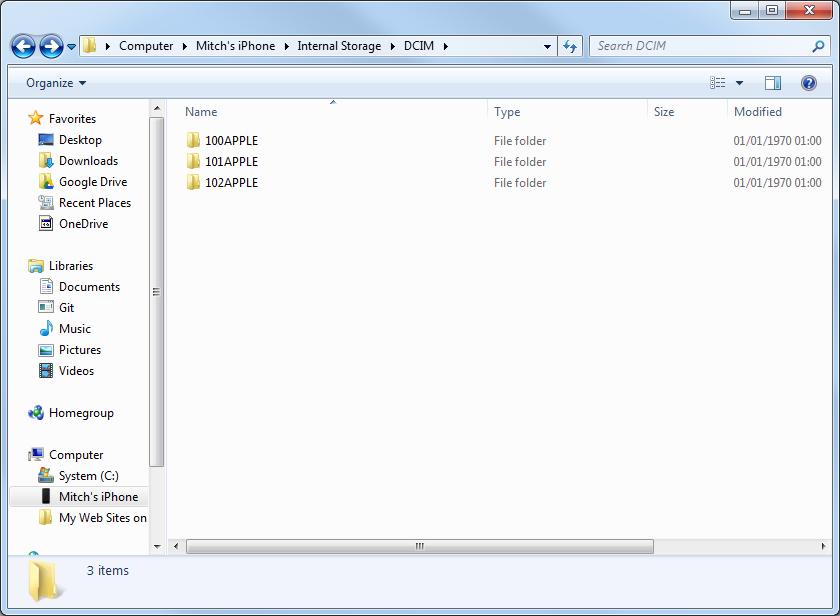 If you are on an earlier version of iOS the workaround suggested by others works well. Just do a wildcard search (*) and sort the results by file name.

Not the answer you're looking for? Browse other questions tagged iphone camera .

0
Sync photos between iPhone and OS X
4
How do I delete empty DCIM folders from my iPhone?
13
how to delete already imported pictures from iPhone in MacOS X Photos app?
0
Is there anyway to avoid redundant cleanups of photos across apple devices?
2
Why does my iPhone say Activation Required?
2
Are iPhone DCIM 1xxAPPLE folders chronological?
1
How to upload photos from iPhone to iCloud Storage without being “managed” by sync?
2
Move Photos and Videos from an iPhone 4 to PC
0
How do I sync my photo's from my iPhone to Google Drive?