Should in-app purchases transfer between devices?

Should in-app purchases transfer between different devices that use the same Apple ID? Is it up to the developer?

My situation: I have two iPads. I purchased Monument Valley and installed it on both iPads. No problem. I only had to buy it once. Now there is the expansion, Forgotten Shores, which is implemented as an in-app purchase rather than a new game. I purchased it on one iPad, but the other iPad still shows it as something I would need to buy.

I've tried deleting and re-installing from the second iPad. I've also tried syncing both devices to iTunes on my laptop. It still shows the expansion as something I would need to buy.

If I click buy, is Apple going to realize that I've already bought the expansion, and just tell the game that it is purchased? Or is it actually going to charge me again for the same expansion?

I'm not sure how this is supposed to work... I haven't tried to do in-app purchases across devices before.

Most apps with in-app purchases have the ability to redownload those purchases if, for instance, you delete the app & need to reinstall it, or if you are loading the app on another device with the same AppleID. Below, the Restore Purchase button in GarageBand which allows me to download loops I have purchased: 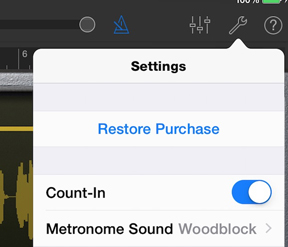 Not the answer you're looking for? Browse other questions tagged ios ios-appstore games in-app-purchase .

0
Where do my apps go when I run out of screen space?
0
App not installing from Mac App Store
2
Can't download 'already purchased' app after device crash
1
Which files are transferred when using Transfer purchases from?
1
How to restore previous version of iOS Video app
2
How do in-app purchases work for child accounts with Family Sharing?
3
Identify if an iOS In-App Purchase is a consumable or non-consumable?
1
Paid consumables and App Store Terms & Conditions
0
Apps in iOS App Store, download old version of the app to support old iOS
0
Will the apps share cloud saves and some in-game purchases from Android device to iPad?