Yesterday I updated my 2012 MacBook Air to Yosemite. Everything was good, everything working great, but, at the end of the night, my laptop’s battery was low so I decided to shut it down, instead of just sleeping it.

Today when I turn on the laptop, it won't do anything. I just get the chimes sound and a gray screen, with not even the Apple logo, and that’s all.

I have tried booting pressing command+R, command+option+R and option+S but that did not work.

The only way it tries to boot is by booting with command+option+R+P: It restarts then the Apple logo appears, but after that, if I try to login to my account, it gets stuck at 50%, no progress; I left it for 8 whole hours and it didn’t move.

I turned it on with command+option+R+P, after it restarted, I pressed command+S for Internet Recovery but I got an error, that flashed very fast before the login screen displayed, after several tries with my phone I took a picture and got the error: 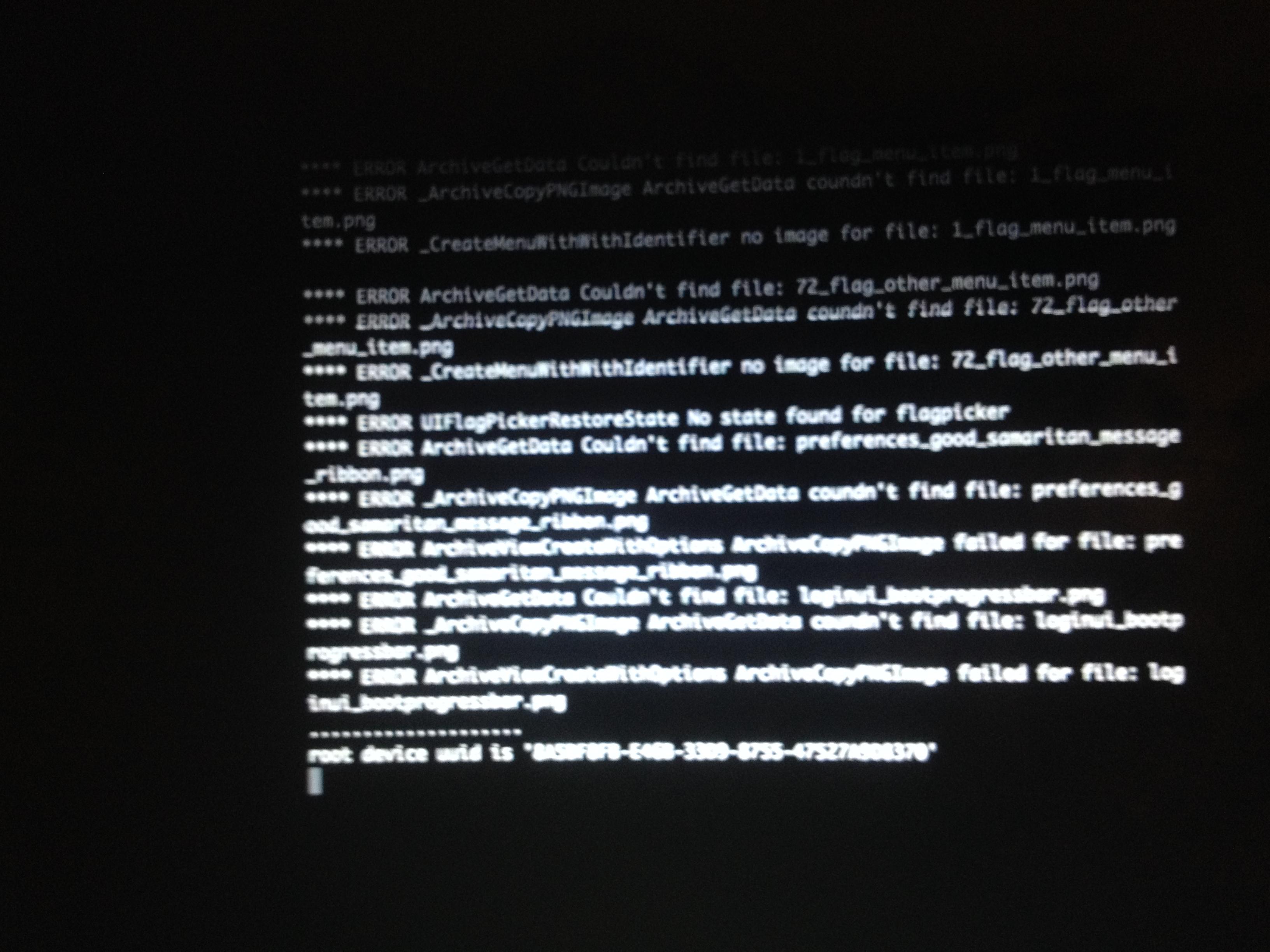 After that error, the login screen appears and if I try to login I get this black screen and just get stuck there, with no more progress: 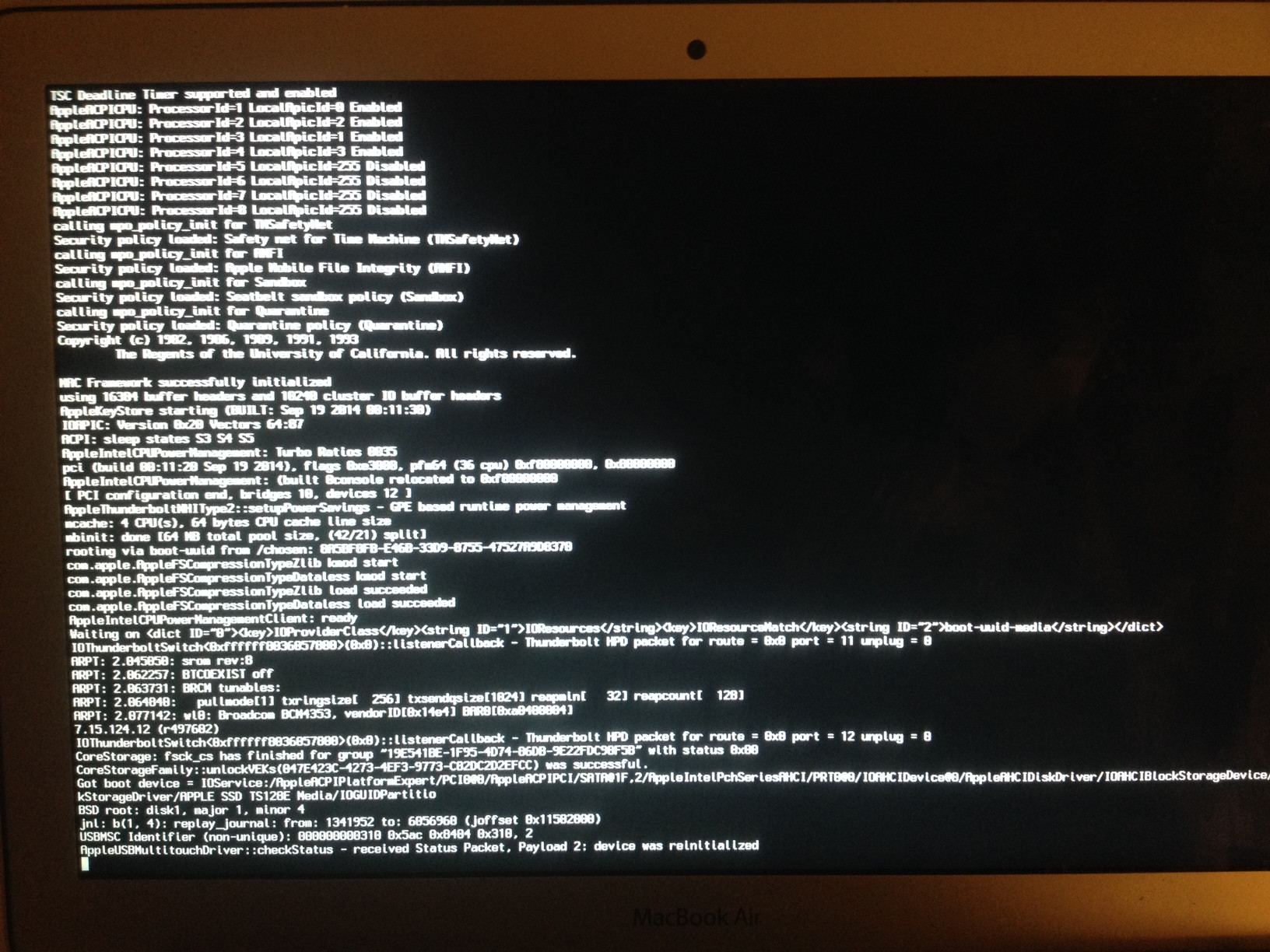 I'm able to enter as a Guest User, but it only let me use Safari—I don’t even have a menu bar or anything.

Since it's a MacBook Air, I can't remove the SSD so I don’t know what else can I do.

If you go into the screen that lets you re-download the OS and also gives you the ability to see disk utility command + r during bootup.

Run disk utility and select the Mac Harddriive [not the OS partition] and run the Repair Disk Permissions feature and then restart the computer and you should have a permanent solution to the black/gray screen.

RECAP [make sure computer is off]:

I have a Mac desktop that I updated to Yosemite. After an initial start, it kept going to blank gray screen in the middle of bootup. I have several accounts on this machine. I finally restarted in safe mode and after logging on to my administrative account the Mac informed me I had a piece of incompatible software -- "Instant On". This was automatically moved to the "Incompatible Software" folder and the installation finished. I have done a shutdown and restart and all appears fine.

What happens if you shut it down & restart just holding onto the option key? That should give you the “Startup Manager” screen which will let you choose a startup disk; more details from Apple’s site. Also if you have a USB drive—thumb drive or other kind of drive—you might be able to boot from that to get some kind of disk repair to happen.

When you boot up from another disk, I would recommend Disk Utility repair the disk. If that does not work—and you are sure there is nothing on the disk you need—then perhaps you can erase the disk. But that is a bit of a radical solution.

I would recommend launching Terminal form the USB disk and then looking at your disk usage. Maybe the disk is full or near full? If so, that might be the problem. I would then recommend you go find something you know is taking up space and simply delete from the command line.

The first command I would recommend you run is ls -lah on the /Applications directory like this:

Look for any large sized files you can toss. The most obvious one in my mind would be the Mac OS X 10.10 Yosemite installer. It should be named Install OS X Yosemite.app. To get rid of that just run this command:

The backslashes are to escape the spaces. You can also run it like this with quotes around the filepath:

After doing that, try to reboot from your MacBook Air’s hard drive. It should work.

When you are back in the system, I would see about clearing out more space. First, manually look around for stuff you are 100% positive you can toss or copy elsewhere like stuff in your personal ~/Documents/ directory. Then I would recommend you download Onyx. There are different versions for different OS versions and while it doesn’t seem like a Yosemite version has been released yet, I would expect that to appear in a few days. Run that to clear out deeper system data & caches that might be taking up space.

UPDATE: According to the comments from the original poster, the system disk for the MacBook Air won’t even mount. If that is the case, then I recommend resetting the PRAM or NVRAM depending on the make/model of your MacBook Pro.

Instructions for dealing with the PRAM are here on Apple’s site; ignore the title that refers to Mavericks since those instructions should work with all version of Mac OS X:

Instructions on how to reset the NVRAM are here. It seems a tad more daunting but not really that hard to do:

Your MacBook Air will now restart with cleared NVRAM settings.

Not the answer you're looking for? Browse other questions tagged macbook-pro boot error macos .