How to prioritize what access point my wifi connects to?

In my office we have two Airport Express routers both acting as access points (no DHCP). They both broadcast the same wifi network (same name).

Now, the one I'm sitting right next to was setup later than the first one, due to bad reception from the first one.

Now my problem is, that even though I'm sitting right next to the new one, my computer keeps connecting to the first one with the bad reception. I have tried removing the network and re-add it again, but it still connects to the one with bad reception.

How can this be, and how do I solve it, without changing the network names and manually choosing which one I want to connect to. 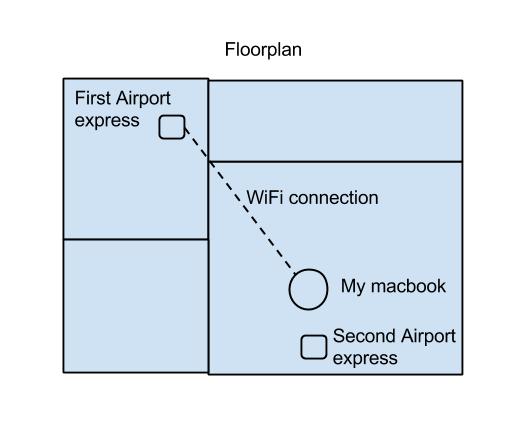 My question is btw. somehow similar to this I think: Connect Mac to closer Access Point

With your setup of multiple access points sharing the same SSID (network name), your wifi client will use its built-in roaming algorithm to switch. But even if you have a marginal signal (i.e. one bar) on the one that's farther away, most times, the wifi client will stick to that access point, simply because it was the first one configured. To get around this you have two options...

Not the answer you're looking for? Browse other questions tagged wifi airport .