MacBookPro10,1 had problems booting, now some system images are pink and fuzzy

A friend just recently bought a MacBookPro10,1 (MacBook Pro Retina, 15-inch, Mid 2012) off of craigslist, it all checked out and worked fine until we erased the hard drive and reinstalled Mavericks (downloaded Mavericks from AppStore on my computer and used DiskMaker X v3.0.4 to create a bootable usb).

It would go through first stage of install (copying files), but after reboot it would hang on the Apple logo plus spinning gear thing. We figured out it would only boot in Safe Mode.

After a few hours of reinstalling and resetting stuff like NVRAM/PRAM and trying to get into AHT(unsuccessfully) and a bunch of other things, it finally would boot normally(without Safe Mode or any other keys pressed on boot).

It was very exciting, except on further use, some of the system images would come up odd colors and distorted/noisy. And it even freezes sometimes. 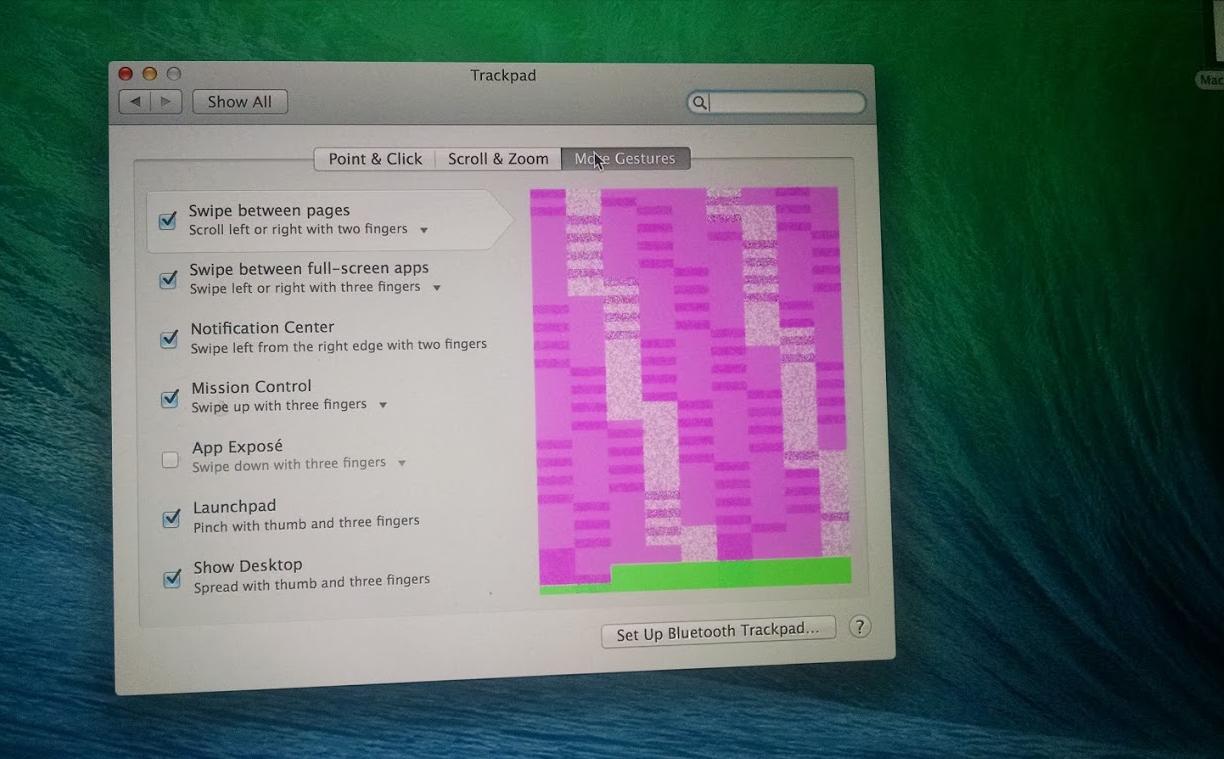 I guess it might be a graphics issue(?), but what would cause only some images to be like this? Is it still recoverable? Has anyone else had similar issues?

I really appreciate any help in advance! Thanks!

It sounds like your USB did not contain the clean bootable version.

I would suggest you start over and follow the procedure from Apple.

Make sure the USB is single partition and minimal 8 Gig. (no other partitions on that disk)

Based on this post and the other one at MacBookPro10,1 goes to gray screen when a USB is inserted :

I would say that you're probably looking at a faulty logic board. The system should be taken into a Genius Bar or an authorized Apple repair centre for further evaluation and/or repair.

Not the answer you're looking for? Browse other questions tagged macos macbook-pro boot graphics startup .

1
MacBookPro10,1 goes to gray screen when a USB is inserted

2
MacBook Pro not booting after update to Mavericks
20
Boot hangs on grey screen (even when booting from USB drive with fresh OS X install)
0
Cannot repair disk0s2 with mavericks utility disk on a SSD
1
Can't fix an user account in Mavericks (frozen)
3
MBPr with El Capitan freezes at or right after login
58
GPU problem - Boot Hangs on Grey Screen
3
Some books are appearing pink in Preview.app
3
macbook pro stuck in boot loop - recovery mode and safe mode not working