Is there a way to find out when a USB flash drive has been last used (on any computer)?

I have a USB flash drive and I believed someone else may have plugged it in their computer and copied some files.

Using my Mac, how do I know when was the last time my usb flash drive was plugged in?

But first, a bit of background. A USB flash drive would be treated by the computer much like a disk. The drive (or, more precisely, the main partition within the drive) would be formatted as a filesystem. Most flash media come formatted out of the box with a VFAT filesystem, which is a lowest-common-denominator solution that works with nearly all devices, including OS X, Windows, Linux, and digital cameras. The next most likely alternatives to VFAT would be HFS+ (the native file system of OS X, which Windows doesn't support at all) or NTFS (the native file system of Windows, supported by any version of Windows released this century, but which has just read-only support in OS X, and is rarely supported on digital cameras).

That background is relevant because different filesystems store the last access time differently. I'm going to work with the assumption that your USB stick is formatted with VFAT. This is important because VFAT filesystems only store the last access date, not the time of day. That would be the best evidence you could hope to collect, assuming that everything else goes right.

Alternatively, instead of using the Finder, you could use the Terminal to run

to see the Access time of a particular file.

There are some important caveats, though!

First, the act of plugging in the media on your Mac will cause it to be automatically mounted, thus altering the last access time of the top-level directory (and perhaps destroying even more evidence than that). A forensic analysis should require precautions such as mounting the media in read-only mode. Therefore, you would have to suppress the auto-mounting behaviour of OS X, which is not that easy.

Second, your suspected coworker / spy could have taken a similar countermeasure of mounting the media read-only, thus leaving no timestamp as evidence. (There is also no guarantee that the computer that the spy used had its clock set accurately, which would cast doubt on the validity of any timestamp.)

The moral of the story is, if you have any sensitive information to be stored on removable media, encrypt it! The easiest solution would be to use FileVault 2. Note, however, that such encryption would make the USB stick unreadable on any machine other than a Mac.

For this the easiest way consists in installing Disk Arbitrator and configuring it so as to only mount any device as read-only. 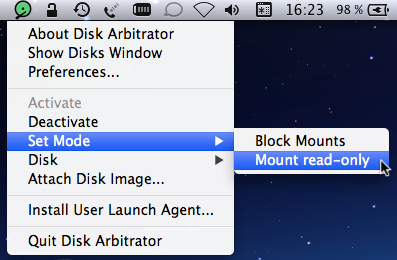 The Disk-Arbitrator menu bar icon should switch to red.

Plug in your USB device. There is now no risk that you inadvertantly modify any access time on it.

Let's say that your USB device is mounted as suspicious_USB.

Open a Terminal or xterm window. Let's say that you are sure that you didn't mount your USB device on any computer since 20 days. Within your command line window, run the following commands:

If you find anything, you will know when your USB was read.

If our suspected colleague or attackant is as skilled as to read this document and to understand how to use it, he might have mounted your USB device read-only too. Hence he would have left it clean of any access time modification.

In this case I have absolutely no method to show that some file was read on your USB device :(.

For "any USB device" this is certainly not possible, as the standard is for communication.
For USB flash drives, you might try checking access dates of the individual files (don't count on it, often not used anyway, and your own check may overwrite the dates if you're not careful), or the presence of files you know neither you not your computer could have put there (like thumbs.db or RECYCLED for Windows, .DS_Store or .Trashes for mac).

There is little point in having this feature, in a typical consumer product. Even if it were stored in the device's firmware, it would still be dependent on the host computer's clock.

Use Belarc Advisor... run it with Admin privileges... when report is finished search for USB Storage Use in past 30 Days... there you can see type of USB and when last used...

Not the answer you're looking for? Browse other questions tagged usb security filesystem .

0
How to find if a USB has been plugged in on a certain date?

3
How can I find out when a USB device was disconnected without ejecting?
3
Is there any energy wasted through USB cables due to data sync when plugged in wall charger
1
How to query the history record of when the USB driver which has been used?
1
External Hard Drive last used / files copied on another computer?
1
Shortcut Virus: What's the effect on a Mac?
1
Did someone copy files from my Mac?
2
how to find the last time I used my usb drive?
0
Detecting theft of data - folder / files transfered from MacBook to USB
1
How can I find out which kernel extension has been updated?