Where does Apple's predictive keyboard get its “contextual” content from?

So I was playing around with the iOS 8, when I notice that upon typing "new" anywhere, the predictive keyboard suggests the term "NewTerm". I recall using this word in a tweet, so I brushed it off. But then, when writing the word "swift", the keyboard suggested "Swisslapse" upon having written "swi". Now this shocked me quite a bit, as I have only used the term "Swisslapse" in a private iMessage chat, which had been deleted three months back (from all my devices). I tried typing a few other words that I had used recently in Safari (running in private mode), but to my relief the keyboard did not suggest them.

However, this creates a couple of questions:

I think it would be helpful to add that I had installed iOS 8 on the 9th of September, right after the GM seed was released to the developer center. Therefore it is impossible for iOS 8's predictive keyboard to have learnt these words at time of input.

Based on the answer provided by Brian Nickel, iOS added the words to my local keyboard dictionary (i.e. words I want autocorrect to learn), which I then synced to iOS 8 while restoring my device from a backup; which resulted into the predictive keyboard suggesting them when seemingly necessary.

So it seems that Apple isn't infringing upon our privacy after all. Glad to have that cleared up!

Speaking only from my experience with iOS 7, the device saves any words you enter but don't autocorrect into your "Keyboard dictionary". The logic is that if you didn't want to correct it, it is a word that you have used and may use again.

I did a basic test. I typed "Swisslapse" into Messages but did not send. After a while I typed "Swiss" and it came up in autocomplete. I confirmed it came up in Notes too. To verify it wasn't Apple app specific I typed a new word into Avocado and it also showed up as a completion suggestion in Notes.

You can clear out your keyboard dictionary by going into Settings.app, General > Reset > Reset Keyboard Dictionary. This answer shows the path to the cache and you could theoretically remove just the offending words using a third-party tool to access and modify the file.

As for preventing new words from being learnt, I would speculate that disabling Auto-Correction would do the trick in iOS 7. Even though "Swisslapse" is an autocomplete suggestion now, it still shows up as an invalid word so it is not interacting with the spell check dictionary. iOS 8 may have more fine grained settings but you have to assume that the predictive keyboard is learning from everything you type and may have to just disable it.

To your question on iMessages, Apple is adamant that they cannot read your messages in transit as they are encrypted on the sender's device only to be read on the receiver's device(s). I would doubt that Apple saves the message contents on device if you delete it there. I haven't tested, but I would doubt they also scan incoming messages for words to autocorrect, though they have started scanning them for predictive text responses. (E.g., "Pizza or Chinese?" generates Pizza and Chinese as the first two predictive responses.)

If you read the Apple patents there is a explanation how it works.

Patent No. 8,232,973 for a "Method, device, and graphical user interface providing word recommendations for text input"

Apple’s U.S Patent No. 8,074,172 for a "method, system, and graphical user interface for providing word recommendations" or predictive text.

…..However, the size of these portable communication devices also restricts the size of the text input device, such as a physical or virtual keyboard, in the portable device. With a size-restricted keyboard, designers are often forced to make the keys smaller or overload the keys. Both may lead to typing mistakes and thus more backtracking to correct the mistakes. This makes the process of communication by text on the devices inefficient and reduces user satisfaction with such portable communication devices. 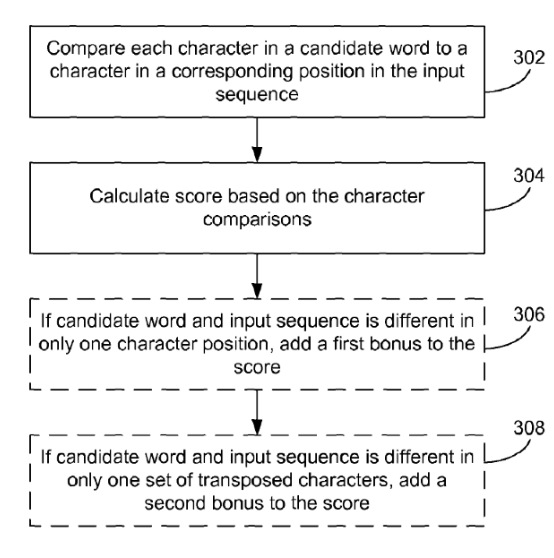 I did not intend to provide a complete explanation on how it works, but provide a guide to it.

Notice my dictionary does not have it so it is red underlined and it is recommending to look it up.

1- look it up and correct

2- add to dictionary as typed

The predictive keyboard logic will take in account all 3 inputs. Even the ignored version, and it will assume it is what I wanted. So in your case, you probably did not add it to your dictionary, but used that word more than once, so it became marked as the most probable (predictive).

Not the answer you're looking for? Browse other questions tagged keyboard icloud security ios .

1
Where does the Mac version of the iPhone Configuration Utility store its data?
1
Does Apple's wireless keyboard work cross-platform such as in Ubuntu, Windows and *ixes?
0
All Keyboard Shortcuts are selecting word backwards
0
Where does OS X get defaults from in Guest User Web access Parental Controls?
3
Does “Expired” certificate gets removed from the Apple's Developer Portal automatically?
11
Where does Ulysses store its local content?
1
Does iOS keyboard “allow full access” setting allow use of data from default keyboard?
0
Where does macos store 'Others' keyboard layouts? How to delete them?