In yesterday's (sep 9th 2014) Apple event, Tim Cook anounced Apple would offer as a gift the album "Songs of Innocence" by the Irish rock band U2.

The iTunes Music Store said album was already "purchased" but it offered no way of downloading it with the purchase button. Instructions said that I would find the album in my library with an iCloud icon indicating the album was in the cloud and I just needed to click that icon to download the album. But the in-the-cloud-album was nowhere to be found in my library.

I updated iTunes to the most recent version to validate that it wasn't a problem with the version I had.

Finally I was able to download the album in the iTunes Store app in my iPod touch. It was in more->purchased->Music->Various with an download button. I downloaded my gift. And I could play the tracks with wi-fi off, proving that the tracks were were in fact downloaded to the iPod.

But when I synced (several times) the iPod with my iTunes library, the album fails to appear in my Library, and only exist in my iPod.

Wrong instructions leading to my confusion

Literal translation: Simply go to the Music app in your iOS device or to your music library in your Mac or PC and find Songs of Innocence in the Album or Artist tab. Your music is in iCloud: touch the list to begin to listen or the cloud icon to download them.

If anyone have this screen capture in english feel free to add it. Maybe the bad instructions are only in the spanish version.

They are referring to the "Purchased" under the "Quick Links" section on the right of the iTunes Store Home Page. Once you do this "Songs of Innocence" will be added to your "Purchased" playlist on the left. 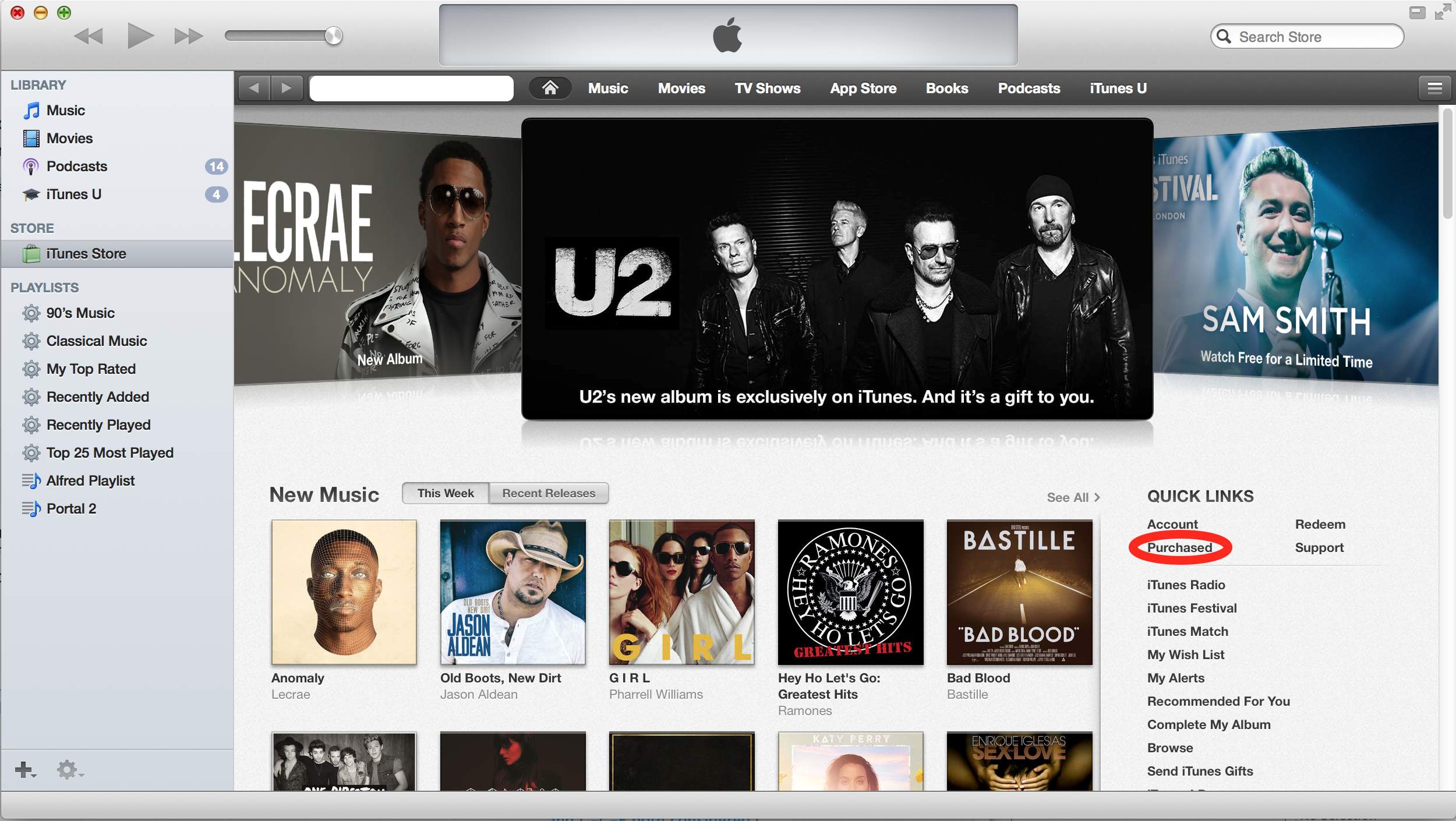 It is confusing because it says it is already downloaded to your "Purchased" folder in itunes but I couldn't find it there. Eventually I found it sitting in the "Recently Added" folder. Just click the cloud icon to download it to your library.

I had the same problem in iTunes on the Mac. To "resolve", I logged out of the store in iTunes. After this, the "purchased" label on the album turns to "free" and allows you to download the album including the booklet.

Not the answer you're looking for? Browse other questions tagged itunes ipod-touch music itunes-store .

3
Exporting iPod Touch library
2
Transfer music to iPod touch with iTunes without disrupting existing music
0
Why isn't my music syncing from itunes to my ipod?
0
How do I transfer or sync u2 songs of innocence from My Library to my iPod?
1
Why can't I download certain tracks I purchased in iTunes?
3
Why are some of music files not being added to my iCloud Music Library?
1
Rename a music playlist from "Purchased" to actual album name on iPhone 6, iOS 9?
2
How to get Apple Music on iPod Touch 1G?
0
Can I re-download the Songs of Innocence download I once had without an Apple Music subscription?