Where is the "Send all traffic over VPN connection" setting in OSX 10.9 Mavericks?

I'm attempting to change the settings of a Cisco IPSec VPN connection which was set up through OSX's built in VPN client in system preferences. The VPN functions as expected, allowing me to access protected servers at my company. I would like to access other websites on the internet through this VPN (youtube, wikipedia, whatever). As far as I can tell, my regular web browsing is not being directed through the VPN.

This apple support page says there is a setting called "Send all traffic over VPN connection" which can be enabled through the Apple menu > System Preferences > Network > Advanced > Options dialogue. However, when I select the VPN from the network interface list and click the "Advanced..." button, there is no "Options" tab or button. I see a dialogue with two tabs, "DNS" and "Proxies". There is no options button or "Send all traffic over VPN connection" anywhere to be found.

So, what gives? Does this have to do with what kind of VPN I am connected to (Cisco IPSec)? Is it related to the VPN's settings? Regardless, how can I route normal browsing through the VPN?

I guess not all VPN connections of the build-in VPN client in Mac have that option.

The PPTP and L2TP do offer the option: Open your network settings: 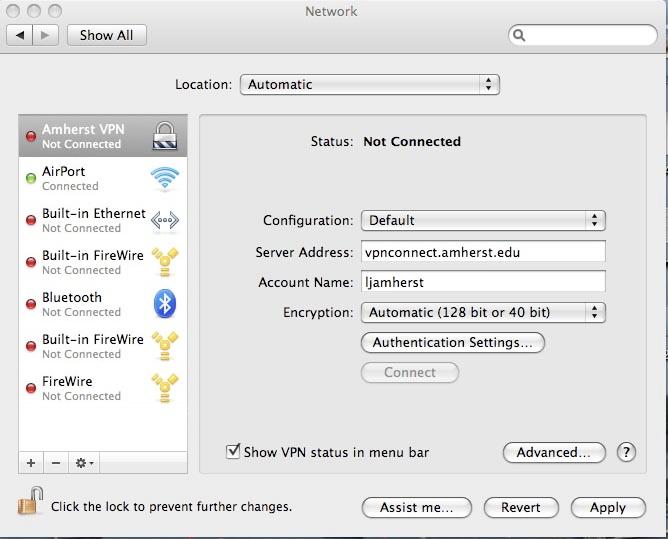 Select your VPN connection and click on the advanced button.

A new window will pop up with three check-boxes under the heading "Session options". The last one of these checkboxes is the one you want: "redirect all traffic over VPN".

However, like you said. The advanced button does not pop up with Cisco IPSec.

I found this thread (https://superuser.com/questions/91191/how-to-force-split-tunnel-routing-on-mac-to-a-cisco-vpn) that maybe could be an answer to your problem (if you use it to route the whole ip range):

Any one know how to hack the routing table (on a mac) to defeat the forcing of VPN routing for every thing over a cisco VPN? pretty much what I want to do is have only 10.121.* and 10.122.* addresses over the VPN and everything else straight to the internet.

The following works for me. Run these after connecting to the cisco vpn. (I'm using OS X's built-in cisco client, not the Cisco branded client.)

Replace "10" in the first command with the network that's on the other side of the tunnel.

I put it into a bash script, like this:

I also found an explanation on how to run this automatically when you connect the VPN, but it's late on Friday and I don't feel like trying it :)

I have since left the job where I was using the Cisco VPN, so this is from memory.

As for which gateway to specify in the second command, it should be your local gateway. When you log into a VPN that prevents split-tunneling, it is enforcing that policy by changing your routing tables so that all packets are routed on the virtual interface. So you want to change your default route back to what it was prior to getting on the VPN.

The easiest way to figure out the gateway is to run netstat -rn before logging into the VPN, and look at the IP address to the right of the "default" destination. For example, here's what it looks like on my box right now:

Cisco VPN servers normally send out a list of routes to private networks so you don't end up sending all of your traffic through the VPN server. To overcome this issue, you can try the suggestions here to migrate from CiscoVPN to the native OS X IPSec VPN by decrypting passwords saved in CiscoVPN PCF files or manually set up routing.

Hope it could help.

Not the answer you're looking for? Browse other questions tagged macos network security vpn proxy .

18
How to ensure that all traffic goes through VPN connection once it has been started?
6
How to selectively route traffic for one specified IP adddress through the VPN tunnel (not all traffic)?
1
How to determine which traffic goes over the PPTP VPN?
1
When connected to VPN using the built-in VPN service, is all my internet traffic routed through the VPN connection?
0
Traffic to IP addresses matching local network not sent over VPN
0
How to send only "work" related requests over vpn for El Capitan (10.11)
7
Sending All Traffic Over VPN Tunnel (IKEv2) in OS X 10.11.5
1
What traffic is not sent? Send all traffic over VPN connection