As I'm sure we're all aware, Chrome by default loads background tabs as soon as they're opened - youtube videos autoplay, ads load, it's a mess. To my knowledge (and following from this thread) there is no way to change this natively, and no plans to implement it in the future.

I've tried searching around for apps/extensions that prevent background tabs from being loaded until they're navigated to, with very limited and mediocre results. The closest solutions seem to be:

Neither of these prevent the video from loading the first place, and still leave me with a lot of bandwidth-sucking and restarting the video when I get around to the tab. First-world problems, I know, but after a few weeks of this it gets under your skin.

I'm hoping my search-fu just isn't strong enough to find a solution - is there any way to give Chrome behavior similar to Safari or Firefox, where the tab just doesn't load until you navigate to it? I'll accept apps, extensions, terminal hacks, anything that works.

Until Chrome comes up with that function like FF, the closest you can get to it is to Disable lots of bandwidth and storage consuming apps.

That can be done here: 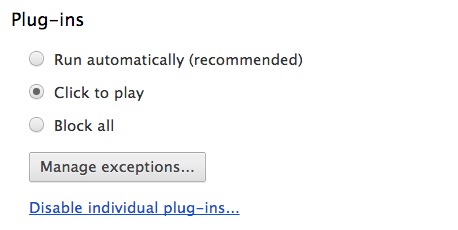 Also go to your chrome://plugins/

and disable all Plugins you do not want.

That will not stop the background loading of the page but will limit the what, and you can still use them at your desire (it will ask you).

And it looks like this example of not loading some advertisement at the top of a page.

Not the answer you're looking for? Browse other questions tagged google-chrome tabs .

7
Safari: stop hiding tabs
99
How to get the chrome tabs to always show when in full screen mode?
0
Tabs opening automatically on chrome
3
Is it possible to open 2 different instances of Chrome with different tabs open?
0
Manage Google Chrome New Tabs
6
How to navigate a lot of tabs in Google Chrome on iOS (iPad)
8
Preventing Safari background tabs disconnecting from server
3
Chrome loading inconsistently after Mojave upgrade
1
Can I permanently lock certain chrome-tabs to the same desktop on Mac?