I had a correct connection to the Internet:

But as of a few days ago, whenever I come back to my computer after a while and jiggle the mouse to turn off the screensaver, my internet speed plummets:

I fix it by temporarily joining a public network near me, and then going back to my own personal network (turning wireless on and off doesn't work, I have to actually join a different network to fix it).

What could possibly be causing this? Other devices (my iPhone and iPad) have great speed all the time, even when my iMac is slow, so my computer must be misconfigured somehow.

Also, it's not necessarily the screensaver itself: if I activate the screensaver manually, my internet speed seems unaffected. It's only when I come back to my computer after an extended period of time away. (I have my computer set to never sleep; it's my home Plex server)

My Internet connection is established through an AirPort Extreme.

My Mac is running Mavericks.

I tried renewing my DHCP lease, with no improvement.

Screen shot of the Wi-Fi menubar when it's working correctly. 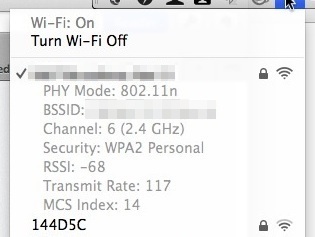 And here's what it looks like when it's slow: 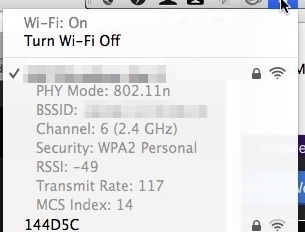 Looks like the only thing that's different is RSSI. What's that?

PS Everything is the default. For example, the location is "Automatic." Wi-Fi is green and connected in Network System Preferences (ethernet is red, obviously), when opening up Airport Utility everything is also green (the router and internet), the light on the AirPort Extreme itself is also green, the cable modem is flashing green, and as I mentioned OTHER devices have no problem getting on the internet. Pinging the router works fine, ping 10.0.1.1. As I mentioned, it's not like the internet is down, just REALLY slow.

PS I realize this is incredibly difficult to diagnose, so thanks everyone for trying. Can you think of anything that MIGHT cause this, I've checked the obvious stuff. Anything to point me in the right direction of more testing and prodding.

PS I don't know what changes, it just happens when I step away from my computer for an hour or so. When I come back, the internet is very slow.

If you want to investigate this problem and really choose the best wireless channel in the exact position you are using your iMac at the period of the day you are using it there is one uniq tool to know and use:

Please note: the 802.11b channels [1 ; 13] are a field of interferences for Bluetooth equipments and leaking microwave owens (they are both on the ISM band of radio frequencies).

First, thanks everyone for helping me. I think I've figured it out. Although I don't know why it works. I've added a "5 GHz" network and joined that explicitly. Apparently, it's normally 2.4 GHz. 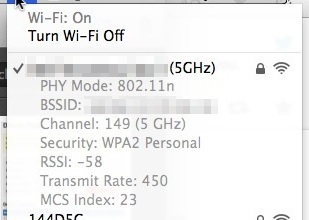 Anyway, my WiFi hasn't slowed down in over 24 hours, so I've got my fingers crossed that it's fixed forever.

Why did this fix it? I have no idea. Perhaps my antenna is faulty and doesn't transmit 2.4 GHz properly? Perhaps the 2.4 GHz spectrum is "crowded" where I live? Not really sure why.

I guess my recommendation to anyone else experiencing slow WiFi would be to try different spectrums (the AirPort Extreme also allows me to pick individual channels, 1 through 11 I think, I didn't try that, switching to 5 GHz seems to have worked).

Not the answer you're looking for? Browse other questions tagged network wifi imac airport .