Is there any software for Mac which watches out head and focus a window that is in a specified monitor based on our head angle? I'm using 3 monitors at the same time and hitting cmd + tab is always the pain.

You may be able to craft your own solution with a combination of scripting software and assistive hardware.

A few examples are linked below. I have no experience with these tools but your goal appears possible.

HeadMouse® Extreme replaces the standard computer mouse for people who cannot use or have limited use of their hands when controlling a computer or alternative and augmentative communication (AAC) device. The HeadMouse translates natural movements of a user's head into directly proportional movements of the computer mouse pointer, so as the user moves their head the mouse pointer on the screen also moves. 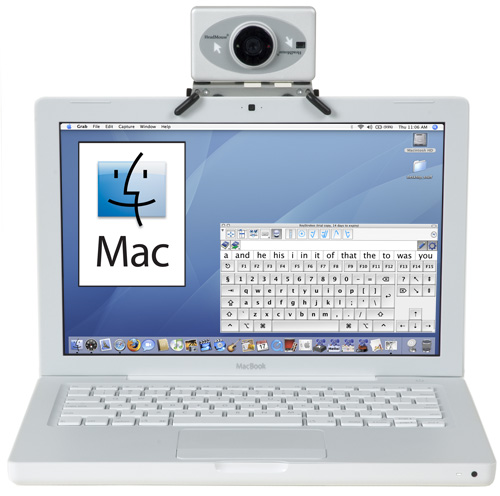 The SmartNav 4 AT is a total hands-free mouse solution. With built-in Dwell Clicking Software and a free On-screen Keyboard created by Lake Software. The AT package is used successfully by people with ALS, spinal cord injuries, muscular dystrophy, and other special needs.

One Switch sell a wide range of assistive hardware and link to associated software.

The following list details a number of different styles of head, mouth and eye operated controllers. Most of these are for PCs and Apple computers, but there are alternatives for games consoles too. Some of these devices are very expensive, so it is always worth trying to track down some way of trying before you buy.

I haven't heard of any such software before, though it certainly may exist.

However, there are a few problems:

Essentially, if you wanted it to be accurate enough to determine what you're actually focusing on, you'd have to go into eye tracking, which can be messy and not altogether accurate with a built-in camera that wasn't necessarily meant for that sort of thing.

In any case, what you're looking for probably isn't possible with the iSight camera and would require some extra hardware (Graham Miln has given you some options).

That said, you may want to look at the Leap Motion Controller, which has a fairly robust set of applications that probably has something like this (so, you'd gesture toward the display you want and it would switch), but it's probably not faster than CMD+Tab (though you wouldn't have to cycle through all of your running applications).

If that doesn't work (or you don't want to buy an $80 motion tracking device), there's always Better Touch Tool, which you could use to set up a few shortcuts (or trackpad/mouse actions) to switch displays for you.

Not the answer you're looking for? Browse other questions tagged macos camera assistive-technology .

4
Is there a way to switch to the selected process in activity monitor?
15
Mavericks window loses focus on Cmd+Tab
1
How to stop window order changing on multiple monitor setup in Mavericks?
4
No Camera in Skype
1
How to switch to windows that dont belong to any running application?
14
Using Command-backtick (⌘-`) to toggle between windows
5
Treat fullscreen as desktop spaces in the matter of navigation
25
OSX cmd+tab behavior with multiple windows & monitors