How do I automate this repetitive task?

Automator would seem to the appropriative tool, but ehmac.ca is stumped and so has this board been so far — my "Automator Newbie" question asked yesterday (my first ever on this site). Two sticking points — changing the .tiff extension to .tif, and losing the Alpha option.

The problem to be solved is prepping a large collection of edited scanned text files in tif format and getting them ready for processing by the OCR app TesseractGUI 0.3. This OCR app balks at TIF files with an extension of .tiff, also balks at Alpha within the file format.

This works in my tests and should give you a starting point.

I use two actions to get the folder and its contents.

Then using a 'Rename finder items' Action. I change the extension with it's settings set to:

Then a 'Run Shell Scrip' Action using the unix command sips I change the format of the files to jpeg and then back to tiff. This removes the alpha channel. 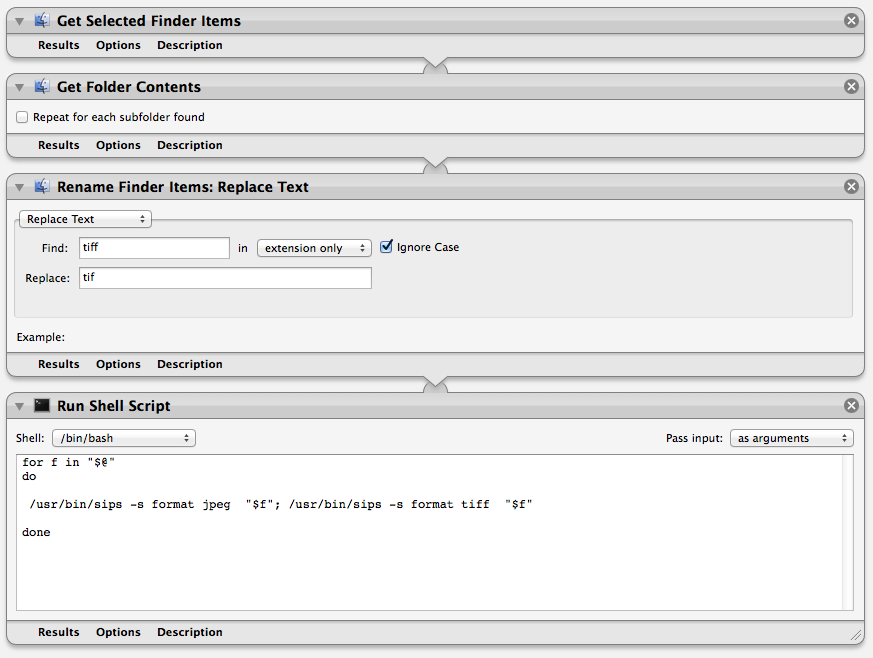 To use I select the folder with the Images and run the workflow on it. It will also work on a single or multiple images if that is what is selected instead of a folder

Update. User @chananelb pointed out that the is an Automator Action that can change the file type. But since they did not put any instructions in how this could be done. I will add it here as an alternative option.

The input of the service stays the same. And the first action as discussed in the comments should be Get Folder Contents.

All other actions can be removed and two actions of Change image type should be added.

The first Change image type is set to jpeg.

The second is set to tiff.

Not the answer you're looking for? Browse other questions tagged finder automator .

1
How do I add a script to the Service menu?

2
On Mac, can one easily automatize repetitive work?
0
Automator Newbie question
1
How to automate audio editing?
2
How to identify file type for a bulk lot of files and attach suitable extension to each
0
Automator: Select only one file out of many files in a folder. Script needed?
3
Automator :: Remove 6 digit date from filename; append current date
0
How to manually "file" files into folder, quickly, only using the keyboard
2
Automate moving and renaming files