How does this complex BASH shell script work?

Apple Support Community member Linc Davis developed this command to aide in diagnosing issues. The output gives a general overview of one's system and is very similar to the program etrecheck. But, it does so using a single command. I wish to break down how it functions since much of the syntax used cannot be found in the MAN pages. Again, this script is the property of Linc Davis. I simply wish to understand how it executes. Thank you in advance.

First thing to understand is that it is not actually a "single command", it is a single line only because it uses ';' to separate command lines rather than newlines.

So the first thing to do when attempting to understand it would be to make it more human readable by using your favourite text editor to replace ';' with a newline. I used Textmate and saved the result as 'linc.sh' so I got syntax highlighting. Then some judicious reformatting/prettying and I had this : 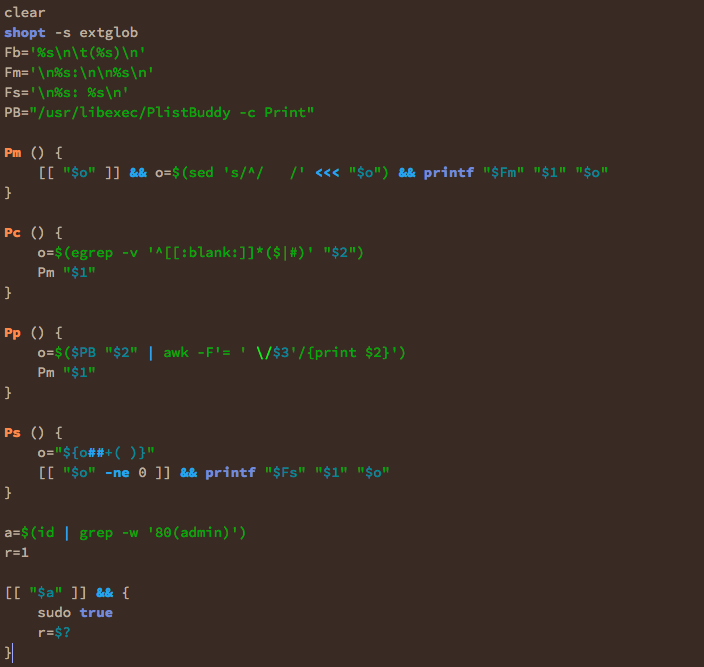 Once you've done that you will have a shell script and you can see that it is using shell variables and expansion to build the options before running a command then using grep, awk and sed to process to output and make it more readable before repeating the whole thing with another command. There are also some shell functions in there.

Get a good book on bash programming and with the help of that and the bash manual pages you'll understand it.

(BTW - this is one of the reasons I do as much of my system administration in IPython, makes for much easier programming and readable code.)

Not the answer you're looking for? Browse other questions tagged macos bash script command-line unix .