File sharing between Mavericks and non-Macs

I am using a MacBook running Mavericks and my brother is on a Linux box; and we often need to exchange files between each other. Both the laptops are Wi-Fi enabled and I also understand that Mac does allow file sharing over Wi-Fi. While I do know that Airdrop works only for Apple devices, I am sure there must be some way to share files with non-Apple devices using the built-in WiFi capabilities. Any suggestions around how? I have tried checking the file sharing option in the Preferences >> Sharing module but it didn't help. Is it possible to share files with a Linux user using SMB or AFP? I understand FTP is an option but connecting using FTP involves a lot of Terminal steps each time, i.e., activating FTP, sharing password with the user, connecting, and then closing FTP. Is there any simpler method?

First of all I enabled guest sharing on my Mac:

Then I activated file sharing on my Mac and designated my Public folder as the share point (default). 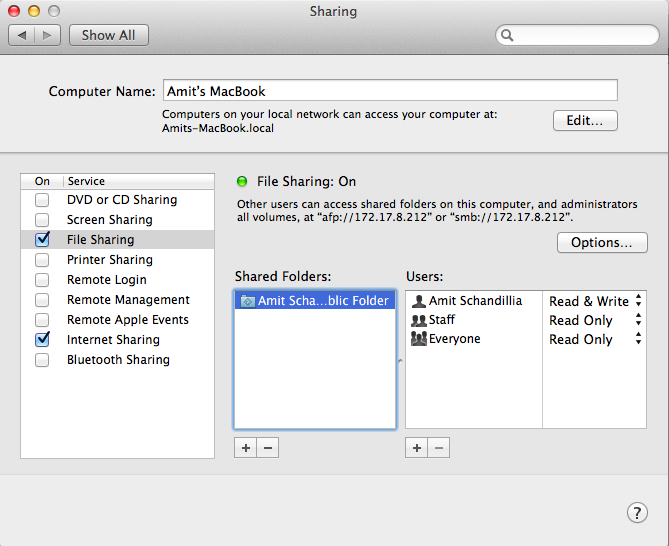 Then I tried the following address on my Ubuntu's Nautilus:

It then asked for user name, domain, and password and I entered guest for all three, as advised by @deeviate. And this gave the following error:

P. S.: I am NOT interested in installing any third-party tool for this job. Mac gives SMB as a part of the OS and thats what I want to use. There might be tools out there that work better than SMB, doesn't matter. I still should be able to use SMB if my OS provides it natively!

regarding getting your SMB sharing connection from linux working...

Don't use the linux gui to connect, have bro open a terminal and try these commands

Once this is working, you can create a script for your brother to automatically mount when it is executed from the gui. Basically, the script is just the mount point creation, and the cifs connection to the smb server... so 2 or 3 lines including the shebang.

To make it super simple, I'd enable web sharing on the Mac, and put the files you want to share to the Linux box in a folder in ~/Sites/a_folder/ . Then give your brother the address that it tells is your personal web sharing address in the Sharing Preferences pane when you enabled Web Sharing. Tell your brother to open a browser and put in that address; it will give him a directory listing as long as there is no index.html file in there. He can download files with his browser. This is one way sharing, from the Mac to the linux box, and will work fine as long as there are no files over 4GB (unless apache fixed that issue and didn't tell me about it). I believe directory listing is enabled by default on the Mac apache2 server.

To share in the other direction, from linux to Mac, you could do the same from the Linux box:

This shouldn't take 5 minutes to set up 2 x 1-way sharing through browsers on both boxes, and relieves you from hacing to trouble-shoot the slightly more complex task of installing and configuring netatalk or running SMB sharing from the mac and getting the linux client to mount it, which isn't always a "it just works" situation, like running 2 apache2 servers is.

Thought I threw my two cents in.

Being both a Mac and Linux user - I find that once a SAMBA share is created on a Linux machine (browseable option on Linux samba turned on with or without a login - you can "connect as" from the Mac to the Linux machine), my Mac would pick it up and list in on Finder's left pane. Here's a quick SAMBA setup for the Linux machine.

Its pretty simple to setup a public share folder (or even a private one) on the Mac. Here's one guide

With the Mac hosting the share point, here's what you need to do. I can provide basic instruction to connect from your Linux box to the Mac, but you'll have to research your particular distro if you run into any issues:

I don't play around with Linux much, but hopefully this will get you started. There's a really good Ubuntu StackExchange if you have questions..and you're using Ubuntu. ;)

This solution is not my first try between MacOSXes and Linux server. Here is a small review about the available solutions for this:

You can use other versions: http://sourceforge.net/projects/netatalk/files/netatalk

Here is a minimal configuration that shares home directories only. You'll want to take a look at the official documentation for more elaborate environments.

As I READ you want to be able to simply share files,
you can do so via the Sharing Preference Pane:
Go To Settings -> Sharing -> File Sharing -> Options ->
"Share via SMB [On]" and "Share via AFP [On]".
-> Add a Folder and -> Check the Box next to "File Sharing" to activate the Service.

I THINK you want to share files without having a router in between the two laptops, so they are basically in an Ad-Hoc Network (Because you mentioned AirDrop).
If that assumption is correct, you can do so:
Clicking on the Wireless Icon in your Menu Bar and choose "Create Network".
After you have done that, you can go on with the steps above.

I'd say install software specifically for this task so you can easily choose when sharing is active. (Just like turning on airdrop.)

The SMB or NFS route means you're running a server on one of the machines. If one of these is a laptop, that can be a pain to remember to disable the service when you roam on to public networks. Its easy to get wrong.

Something like Retroshare or Nullsoft WASTE would do the job. Retroshare is a FOSS p2p client for mac and linux. http://retroshare.sourceforge.net/downloads.html

You can set a folder to 'share' and its available to folks you chose to share it with minimal configuration.

Not the answer you're looking for? Browse other questions tagged wifi sharing file-sharing file file-transfer .