When I look at the storage section of my phone, the various categories add up to about 2.5 GB of storage, but it says that 11.4 GB is being used. Is there any way to figure out what else is taking up space on my phone? 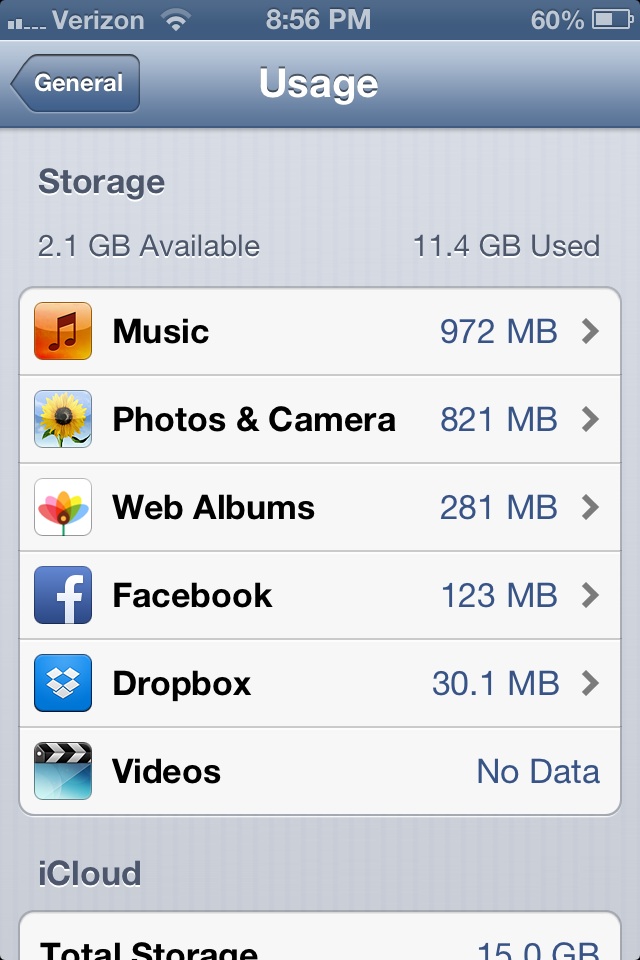 Please check out What is other on iPhone Storage to get a nice way in finding your hidden storage waste.

Also to give you a nice way to fix this. Restore your iPhone to the most recent version and then place the backup file back. Don't just update as it won't remove anything.

Also check out this Apple KB about the space issue.

Since the upgrade to iOS 9.2, I have noticed that my backup size has been growing by 100MBs with every sync. No amount of health data, mail or messaging can account for this. I believe it has something to do with the feature in iOS 9 which allows documents and data from applications to be backed up to iCloud Drive outside of the iPhone backup menu.

This "helpful" feature to iOS appears to store the documents and data accumulated by an app not only in the iPhone's local storage but also in your iCloud quota even though it is not transparent that it is doing so. Since for many apps, this local cache is many times larger than the application files themselves, it is possible that this is responsible for the rapid, undocumented, and unconfigured consumption of iCloud quotas.

Unfortunately, I have tried to delete and reinstall the most nefarious offenders and even though it has opened up over 2GB on my local storage and turned iCloud Drive off, the iPhone backup process has yet to recognize this adjustment. I do not know if this is a problem with the iCloud/iPhone negotiation process, or corrupted settings on my phone. But, this feature is the only feature that I have found that even comes close to adding up the 'missing' amount of data which is hogging up my quota.

Is there any way to figure out what else is taking up space on my phone?

Yes, do a full backup (not just sync) to iTunes, and the categories of missing used storage will appear in the iTunes report. It is likely the category will be Other.

I received low storage warning alert from iOS. I will round numbers to nearest GB in this answer.

iPhone showed less than 1 GB free. iTunes showed 17 GB free. If I added up the total storage used in the iPhone report, the 17 GB appeared to unaccounted for.

I ran iPhone backup from iTunes. After that, iTunes showed 17 GB used in Other category. Less than 1 GB free space was reported by both iPhone and iTunes.

Warning: Destructive step. Next, on iPhone, I performed Settings > General > Reset > Erase All Content And Settings. After iPhone restarted, I restored from backup.

After restoration, both iPhone and iTunes reported 17 GB free. There was 0 reported storage for Other category in iTunes.

After all above steps, I streamed videos using Apple's Videos app for 2 hours. iTunes now reports 2 GB used in Other category. I now have 15 GB free reported by both iTunes and iPhone.

Apple's support article HT201656 confirms my observation that the Other category is "Cached files...created when streaming..." However, that article also states, "Your iOS device automatically deletes cached files when it needs more space." This is false. If it was true, I would not have gotten the low warning alert in the first place.

Are you using Telegram App? I had the same exact problem where the storage would not add up, after so much researching, I found out that Telegram app caches all the datas but does not show it in the Settings > General > Usage > Manage Storage. If you are using Telegram App, go to it's Settings > Data and Storage > Storage Usage and there you can Clear Cache and free up some space.

I deleted telegram becaus it was using 2gb of storage and defaults to keep videos chats and a ton of mideast chats non english it appears to be a mess.

Not the answer you're looking for? Browse other questions tagged iphone ios storage .