How do I pin notes to the top of the list in Notes.app?

In Notes.app (the default notes app that ships with Mac OS X since 10.8), is it possible to pin notes to the top of the list, regardless of existing sort order?

You can pin notes to the desktop (i.e. open notes in separate windows) but I'm talking about a feature akin to Simplenote's pinning that simply places notes at the top of the list.

In the screenshot below of Simplenote, you can see the dot to the left of the 'Reminders' note indicating that it's pinned to top. On the right, you see the 'Pin to Top' feature. Does this exist for Notes.app and if not, how can a solution be hacked to support it? 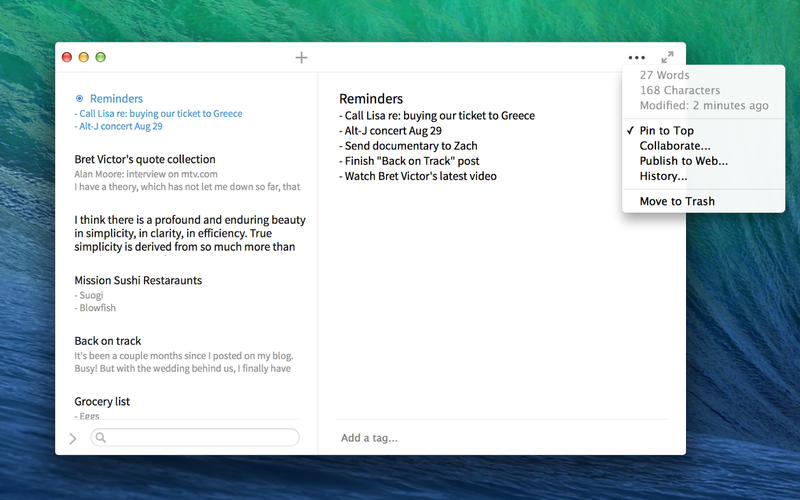 How about creating another folder, call it 'pinned' and keep your notes there. Works for me, anyway...

You could use sort by Title then use wildcard characters (ie *), or cleaner method is to use numeric, 1, 2, 3 in the title so you have more then one pinned and in order.

At first I thought we can use touch command for the note you want to pin, and then I realize all the notes are stored in single file. There is a discussion where Notes.app store all the notes.

So I don’t think there is an elegant way to hack this Pin to Top feature.

It is obiously not In the Design of the Notes App to include such a feature. So your only way would be to "hack" it. And I would choose AppleScript for that.

I am not very familiar with AppleScript, but I do know, that it is very powerful regarding Apple's included Stuff.

I found a nice AppleScript on GitHub here : https://gist.github.com/jthigpen/5067358

Exporting a Note from the Notes App.

So it would be possible to select a Note, send it to the AppleScript which then could create something like a permanent "touch" (as suggested by sayzlim).

Or - As said above, you can try to hack the original file. But that's not very stable. You could ruin all your comments if something goes wrong.

However, If a feature is not designed by Apple and AppleScript doesn't fix it, well then you should probably ignore it, because it is too much work to get it.

Not the answer you're looking for? Browse other questions tagged macos notes.app .

2
How do I "pin" Notes in Mountain Lion?
1
Open Notes.app notes in an external editor
0
Are locked notes in the Notes.app are encrypted on the local host?
0
How to get back all notes when Notes icon disappeared or the Notes.app got deleted
4
Unable to pin notes and add tables in Notes, High Sierra
3
How to connect notes with links in Notes.app?
20
Create local backup of notes in Notes.app on macOS
0
Search in Apple Notes.app for MacOS does not work at all
2
How do I use OCR in iPhone Notes?