MacBook battery/replacement battery does not work

(Note: This happened a few months after I began heavily using a dual-boot of Ubuntu on my MacBook, as well as upgrading the Mac OS to Snow Leopard. This is a 2008 black 13-inch MacBook.)

I assumed this meant that the battery was completely shot, so I just recently got around to buying a new one. (I know, I should have dealt with this sooner.) It just arrived today—I bought it from a respected eBay seller—but it does not appear to take a charge. One thing that I have noticed is that my computer now stays on for a few seconds after removing the power cord, then goes to sleep; when I attach the power cord, I can wake it up again and it hasn't been powered down. (Just like the way my old battery acted at first.) However, my battery indicator still shows just an "X" where it should show a charge.

I've done some research and found that resetting my computer's PRAM and resetting the SMC have been known to fix these problems. However, I have done both—to no avail.

One last thing: For the past few months or so, whenever I do software update, I always have a firmware update (pictured below) that never seems to actually be applied. 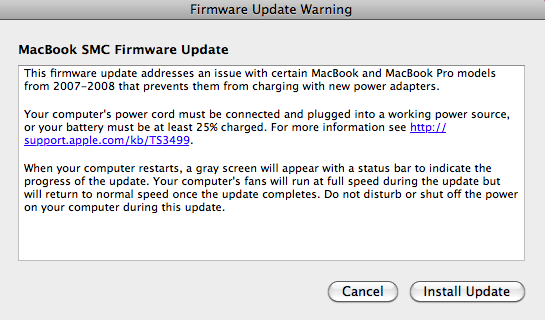 I'm thinking it has something to do with the failed SMC update.

Can you do an update of the SMC Firmware independent of Software Update. Download the update here http://support.apple.com/kb/DL1312

Once you are satisfied that the update has been applied successfully, keep your new battery on charge for 24 hours. Let us know if it fixes the issue.

The computer should not go to sleep seconds after disconnecting the power cord. I suspect you got a dud battery. Contact your respected eBay seller and ask for a replacement or your money back.

Always buy original Apple batteries. I had also bought a battery for my old iBook G4 from eBay, it also did work.

So, my advise is to buy original Apple parts and accessories.

I had exactly the same problem. The key clue is the 'X' icon - the new battery is bad, and the Mac is unable to recognise it.

The other replies suggesting an official Apple battery are the safest option. However, you might want to look into getting something from iFixit (good quality control, reasonable price) or even Amazon (price will likely be lower, and they have an excellent return policy).