Recently—I'm not sure exactly when—iPhoto 9.5.1 started behaving very strangely on my Mac. Browsing through events, albums and photos seems to work fine. However, when I click on the Edit icon to manipulate a photo, I either see a completely black working area or what appears to be corrupt image data.

Interestingly, I can actually edit the photo, even though I can't see what I'm doing. For example, if I rotate the photo and then back out to the event view, the thumbnail shows up rotated. Also, this appears to only affect images of certain sizes: if I start with a very small photo (e.g., 600x600 pixels), editing works fine. 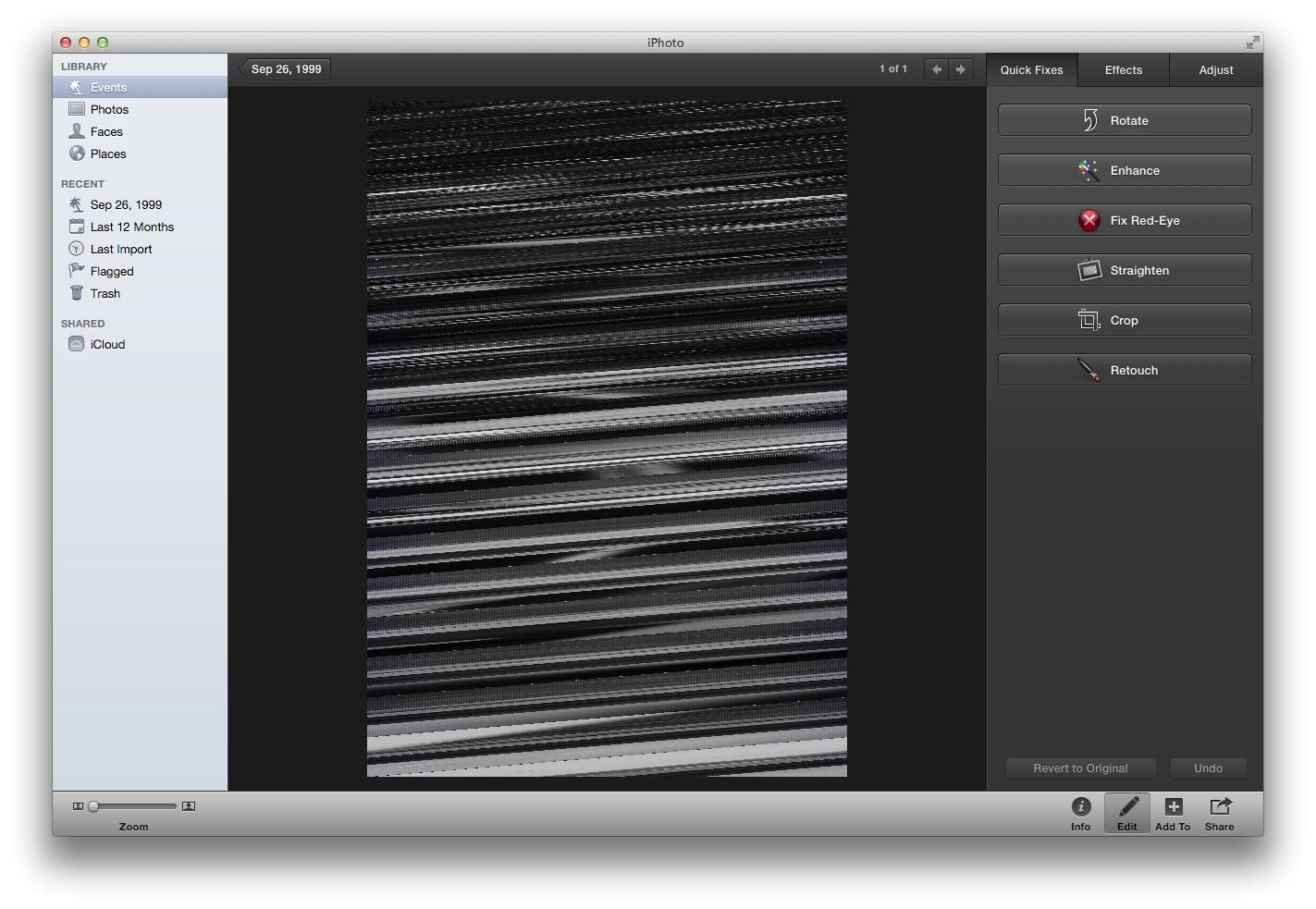 Unfortunately, none of these approaches fixed the problem.

Interestingly, other users on my Mac can use iPhoto without problems. In fact, if I log in as a different user and load up the exact same test library I created as described above, it works fine.

With that in mind, it appears that there's something going on with my account configuration that is causing this problem, rather than an issue with the library itself, but I'm at a loss to explain what it is.

I'm still having this issue, but I tried running iPhoto from the command line and noticed that this message is logged every time the app tries to display a photo in editing mode:

This message doesn't appear when I run iPhoto as a different user, even using the same library, so it seems to be related to the problem I'm having, but I'm still unsure as to just how they're tied together.

Based on some additional reading, I tried running iPhoto like this:

This generated some additional log output when I tried to edit a photo:

This seemed interesting, particularly because this error doesn't appear when I (successfully) run iPhoto as a different user. However, the number of open files "in the system" isn't appreciably different in these cases, particularly since I'm using fast user switching to switch between users, so nothing much is changing between invocations. Here are the number of open files in iPhoto and system-wide on my account:

And here are the number of open files in iPhoto and system-wide while another user is running iPhoto:

As you can see, the number of open files isn't significantly different when iPhoto is run as a different user, so again, something peculiar seems to be up with my account. I remain at a loss as to what that could be, however.

Note that I've tried increasing the system-wide limit on the number of open files as follows:

Unfortunately, this had no effect.

3
How to make iPhoto library back into bundle
3
How to troubleshoot “iPhoto unable to connect to Photo Stream”?
2
Missing photos from iPhoto sync in iTunes to iPhone
4
How do I move my iPhoto library to an external drive available through Time Capsule?
5
Get exclamation point alert icon when opening most pictures in iPhoto
1
How do I downgrade an iPhoto library from version 9 to version 8.1
1
iPhoto does not import photos from iPhone after switching the library to external storage
2
iPhoto on Mac doesn't download the full iCloud photo library