Is there a way to deploy an iOS app to a device without requiring human interaction.

By 'no human interaction', for instance, consider an automated scenario (in a CI environment) where the server can deploy an app to a device and there is no need to have a person to go to the device in order to open an URL and click 'install'.

Following image shows what I want to avoid. 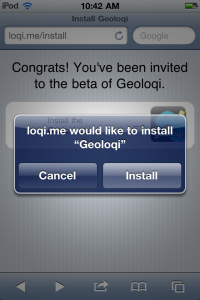 Yes, you can do unattended (or silent) installs from iOS 7 onwards on supervised devices. For iOS 6, the user will see the install/cancel prompt and unattended installs without user intervention is not possible.

With iOS 7 the following has been added:
Silent app installation. Now via the MDM API, an IT administrator can send an app to the device and have it installed silently in the background. There is no need to ask the user which delays compliance, the app just installs itself. This works both for apps in the iTunes App Store that the company may have purchased a volume license for and apps developed by the company itself for internal use, that are not stored in the iTunes App Store.

Contrast this with what iOS 6 provides (described in the same article), which is (italics mine):

In iOS 6, through the use of MDM APIs you could:
Install Apps via MDM. This feature tells the user that they must install an app. The user could ignore this message and the administrator will have to decide how to handle this. They could set the MDM system to automatically lock their device out until they install the app. They could keep calling the user asking them to install the app. Either way, the app cannot be installed for the user by the IT team.

Yes it is possible. You need to create a profile for said device(s). Profile Manager and Apple Configurator are your friends for such tasks.

Not the answer you're looking for? Browse other questions tagged ios applications development automation .