How do you paste syntax highlighted code into Keynote '13?

I give a lot of code heavy presentations with Keynote. Syntax highlighting makes these readable.

In the past I've used web based syntax highlighting tools, and then pasted the easier-to-read code into my presentation.

When I upgraded to iWork '13, which includes Keynote 6.1, pasting content strips the font style and color.

For example, if I take this colorful code from GitHub and paste it into Keynote it removes all the formatting as shown here: 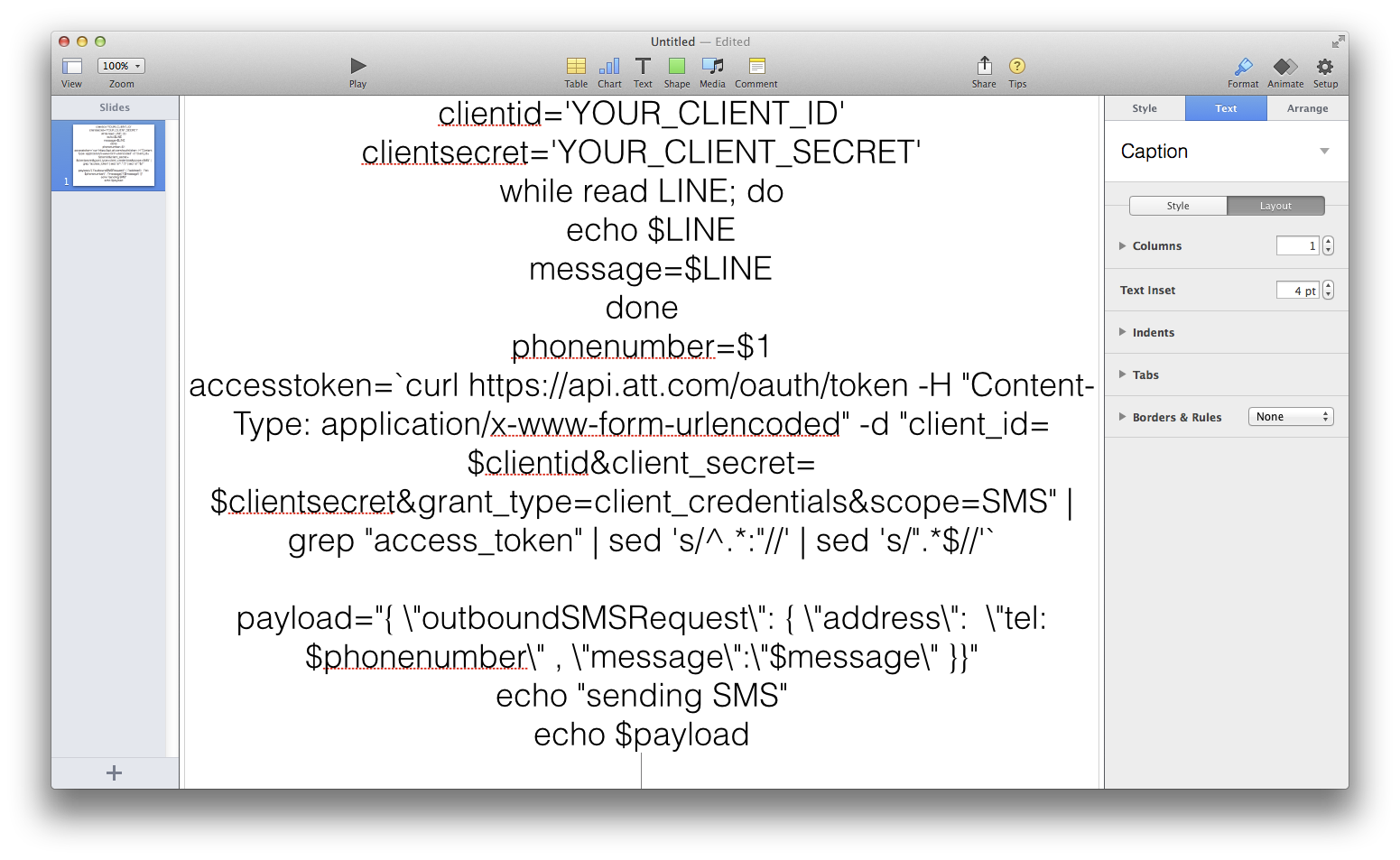 Is there a way to get syntax highlighted code into these presentations?

Keynote 6.1 definitely supports some kind(s) of formatted text pasting, as I can get this to work with Safari. But it doesn't seem to work with Firefox or Chrome (at the time of writing). From a bit of testing, it seems the Apple apps all play nicely together (no surprise there), and a few others will copy/paste to/from the Apple apps too (including Microsoft Office products). Unfortunately when you copy from Chrome, you only get plain text & HTML-formatted text copied to the clipboard, so it would appear Apple's iWork apps don't support pasting HTML formatted text.

So if copy/paste doesn't include formatting, you can either:

Surprisingly, Apple's own TextEdit.app will happily paste formatted text from Chrome, and it can be re-copied to the clipboard and pasted with formatting into Keynote/Pages/etc.

Depending on your point of view, this may seem a limitation (or fault) in Chrome/Firefox or in Pages/Keynote/etc, but in the end they simply don't speak the same formatting languages (at present).

I'd encourage anyone experiencing this to send feedback to the developers on both 'sides' in the hope of getting this fixed—either with Chrome/Firefox supporting RTF/RTFD copying (or whatever is most standard/appropriate beyond HTML), or by Apple's iWork apps supporting the pasting of HTML content.

More than you want to know about copying to the clipboard

When you copy some text to the clipboard, depending on the application, it may get copied in a few formats. You can see these using Apple's Clipboard Viewer application (requires building in Xcode).

As you can see there are a variety of plain text formats (with various encodings like UTF8/UTF16), RTF types, PDF and Adobe types, image types. There's also a bunch of metadata types that describe the application that copied the data (e.g. com.apple.iWork.TSPNativeMetadata), or the features of the copied text (e.g. com.apple.iWork.TSPDescription), and what appear to be separated text and style data (ustl and TEXT as CorePasteboardFlavorTypes, and their com.adobe.indesign-import- equivalents).

This is probably the online highlighter you are using.

I use http://markup.su and it works fine with Keynote 6.1 - it autodetects a number of languages and has a number of "themes".

If it isn't the highlighter then it may be your template or browser. I was able to take your code and paste it from markup.su in Safari into Keynote perfectly.

If you don't like the idea of pasting your code online, consider installing the Pygments python package and generating your highlighted syntax at the command line:

In This way I can keep my codes the same look when I was writing and presenting them.

Pasting rich text from Xcode to Keynote works when you paste in an existing text box.

It doesn't when you paste into a new text box.

Not the answer you're looking for? Browse other questions tagged keynote iwork .

0
How do I copy global text substitution settings into iWork '09 (Keynote, Pages)?
6
How to change color scheme of Keynote slide design/template?
8
How to change master of an existing slide in Keynote 6.0?
3
How do you uninstall Keynote 6 but leave Keynote 5?
2
Split Keynote Builds Into Separate Slides
9
How to stop Connection Line from snapping to object in Keynote
1
Paste HTML into Pages
1
Paste image from clipboard into Keynote
3
How to copy and paste styles with Keynote?
1
Keynote: How to skip "open presentation" window?