For a while now, my sent mail folder has been over/underactive. For over a decade, I've bcc'd myself on emails and handled the incoming bcc from the inbox. This meant I deleted the sent mailbox without concern.

Since this started, I haven't deleted any of those sent messages, which is possibly just an annoyance and kludge rather than a life-threatening disorder, but still.

I've tried tweaking the gmail folder settings, but no changes in behavior have been observed.

Assuming I understand your question correctly:

It all starts with in the origin.

In your case it is the Gmail.

First go to Gmail and settings and disable the "show in IMAP" for Send messages.

Now Gmail will not longer send you the send messages.

However, next you need to do is also to tell the Mail.app not to save the Send mails on Server.

That is done here 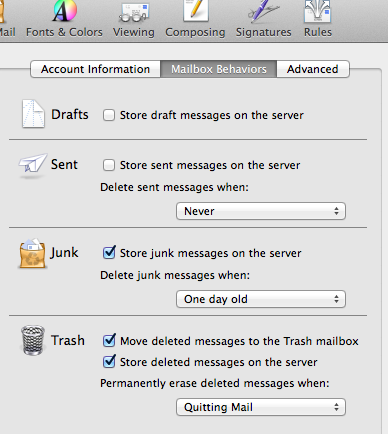 Not the answer you're looking for? Browse other questions tagged macos mail.app google-apps .

18
How can I re-map Mail's "Sent Messages" folder to an IMAP server's "Sent Mail" folder?
3
I cannot configure Mail 5 on Lion to work the way I want with Google GMail
0
Mail sent from Apple Mail is not show in Gmail's Sent folder
3
Mavericks Mail- Sent folder not updating
4
"Apply Rules" to Sent Mail folder in OS X 10.9 Mavericks does not work
0
Synching Mail Sent folder on new computer
5
Is an Archive Mailbox just a regular mailbox? Or is it special?