Any fixes for Dock not following the mouse to move to different monitors in Mavericks?

Just installed 10.9.2 and none of the bugs listed here are fixed for me. Especially the responsive scrolling bug (that for me occurs in the Mac App Store app) and the Dock not following the mouse to move to the active monitor.

I still haven't found a solution that fixes the responsive scrolling issue.

The workaround for fixing the Dock issue is not that elegant either:

Mavericks introduced the ability to have the Dock and Menu Bar appear not just on the primary display, but on your secondary displays, as well. Unfortunately, after having lived with this functionality since release, I’ve found its implementation more frustrating than useful. With the dock set to auto-hide, it’s sometimes impossible to actually cause the dock to appear when and where you want it.

I very much like the menu bars at the top of each monitor, but as with most of the other things about multi-monitor support in Mavericks, there’s no way to throw out the bad bathwater without also pitching the baby with it. The only way to get the Dock to stay sensibly where you want it to is to disable the new fullscreen behavior, which also kills the per-monitor menu bar settings.

Is there a way to fix the Dock issue without being forced to move the mouse to the top or bottom edges of the screen to force it to move?

Are you using a trackpad by any chance? I too thought the way the Dock popped up on different monitors was completely arbitrary or broken, until I found out how it actually works:

This is designed like this intentionally so that as you're mousing around in full-screen apps, you don't inadvertently trigger the dock when you use controls at the bottom of the full-screen window.

It actually works really well, once you know how it works ;-)

Well, you can disconnect and then reconnect your secondary monitor but that isn't exactly elegant either...

It should be noted that — at least in my testing — the Dock consistently won't follow the mouse to a different monitor if 2 monitors are placed "on top" of each other like so: 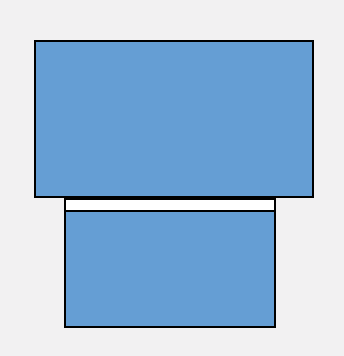 If you place the monitors next to each other, the Dock follows the mouse (= active monitor). Just by looking at it, it seems OS X's logic is that the Dock always appear on the bottom and so 2 screens stacked only need 1 Dock at the bottom of the bottom-most screen. Not that I entirely follow the logic behind that :)

This has been a major headache of mine since 10.9, and with no fix. It's almost like it happens spontaneously. However, 10.9.2 totally remedied this for me. Install Tinker Tool and mess around with some of the dock settings. This was installed when I updated to 10.9.2, and I have since removed Tinker Tool. I have no idea if this modified the right line of code in the right file to fix this annoyance, but it's fixed for me. My screen doesn't even have to be active for the dock to show. As in I can just move from the left screen, across the main screen, to the right screen and mouse down to activate the dock and it pops right up. No clicking the right screen or anything. I used to have to do the shove the mouse down trick also, but not anymore.

Not the answer you're looking for? Browse other questions tagged macos dock bug scrolling .

164
Task Switcher moves to non-primary display on Mavericks-Catalina
11
Moving dock between vertically arranged displays in OS X Mavericks and later
4
Yosemite moves all desktops to one display on startup
2
The Dock was moved to the right side of the screen but still auto displays when cursor on bottom?
1
Why Isn't the Dock Showing/Hiding Correctly
5
show dock permanently on the primary display only or simultaneously on both displays
1
Dock moves to either bottom of main screen OR left of second screen - can't do left of main screen