On my old MacBook Pro, I mostly used the US-International keyboard, which used the Opt key to switch to a large set of markings. On my new MacBook Pro with OS X 10.9 (Mavericks), I can't find it. The only "English" keyboard has just a few such "dead keys", but none of the marks used by eastern-European languages are present. I've found a number of references to US-International keyboards on Mavericks in various forums, but no clues for how to enable it. Does anyone here know?

I think the keyboard layout you are looking for is "ABC Extended" on Mac OS X El Capitan (10.11). If you are on an older version of Mac OS X this keyboard layout is called "US Extended", the rest of this answer uses the most recent name but everything else is the same between versions.

Here is how to enable either "ABC Extended" or "US International-PC". 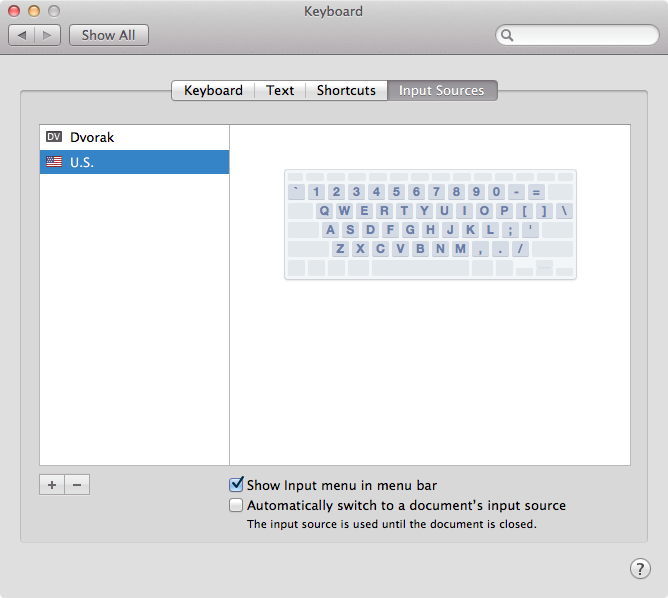 In the Keyboard preference pane, click on the "plus" button in the lower left to add a new keyboard layout. Then select "English" in the next dialog box, scroll down to the bottom, select "ABC Extended" or whatever else you choose, and click "Add". 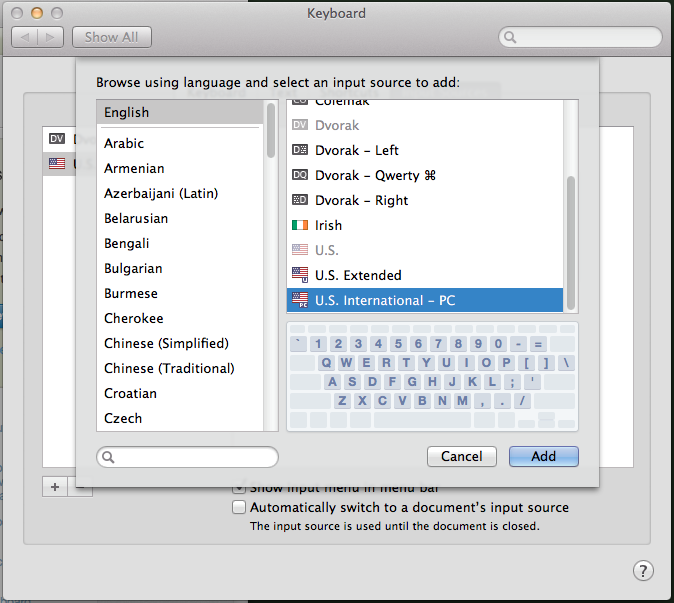 Here are the diacritical "dead keys" available in the standard US layout.

And here are the many more diacritical "dead keys" available in the ABC Extended layout, which provide for Eastern European and Slavic languages that use the Latin alphabet, along with other languages as well.

This screen shot shows the "option" keys in ABC Extended.

This screen shot shows the "shift-option" keys in ABC Extended.

Here are other settings you need to be aware of. 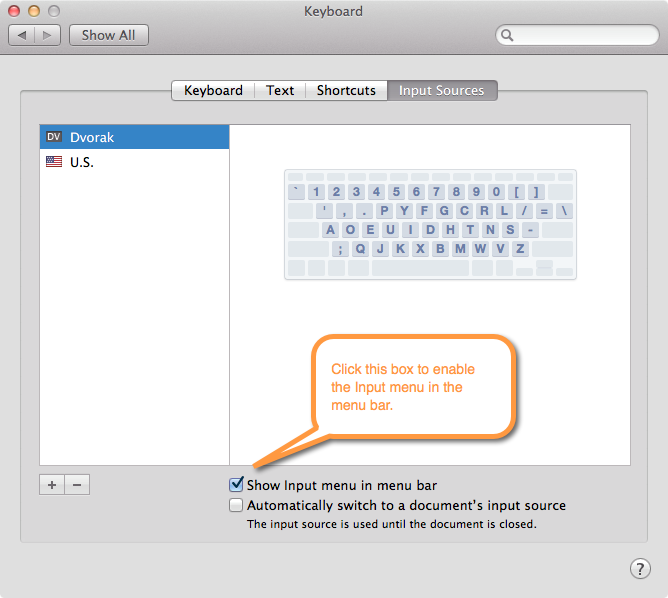 Enable the pull-down menu on the menu bar. I would also un-check the box for "Automatically switch to a document's input source" because I find it too confusing in practice. But at least now you know where that setting is located. 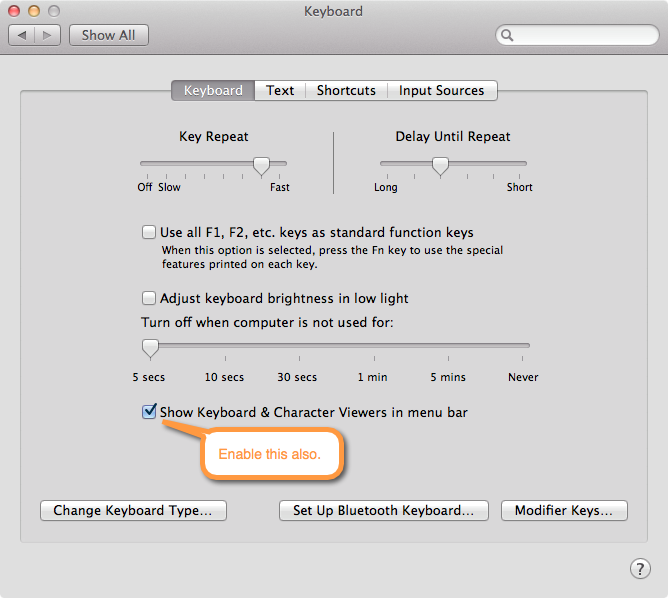 It is also helpful to go to this pane and click the box to enable the Keyboard Viewer, so that you can see an on-screen floating window that shows you all the available diacritical dead keys in the layout that you have selected. 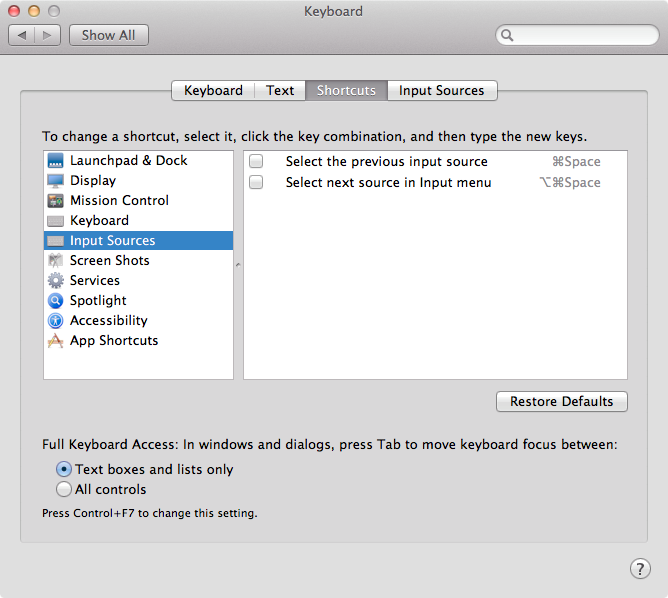 Here is where you can enable or disable the custom keyboard shortcuts to rotate among the list of different keyboard layouts which you have selected. I decided to disable these keyboard shortcuts because I found that it was too easy to accidentally rotate among multiple keyboard layouts and I was confusing myself as to which layout I was using at any given time. I would rather use the pull-down menu on the menu bar. It takes more time, but at least I am 100% sure of which keyboard layout I am using at any given moment.

I seem to have partially "solved" the problem, though I don't quite understand how I did even that. When I tried to follow the above instruction, I did find the "US Extended" keyboard setting, but when I selected it, I saw the same 5 dead keys as in the "U.S." keyboard, but none of the others shown above. I poked around at it for a while, tried varying various settings, with nothing changing, until I suddenly noticed that the "US International - PC" keyboard had appeared in the list.

So I tried it. Nope; it also showed the same 5 dead keys, good for French and German (which I use a lot), but not so good for Danish or Czech or Croatian. then, after wondering where it was all hiding, I decided to take time out and examine a bunch of other language-specific keyboards. I added languages like Czech, Polish, Croatian, etc. to my list, which already had Russian, Bulgarian, Greek, Hebrew, etc., but no other Latin-based keyboards. I had them listed on my old machine, but found I never used them, because it was easier to use the US-International keyboard for all of them.

But this doesn't really make sense. As I understand it (and learned on my old machine), what used to be "US International" and now seems to be "US Extended" is designed to allow the use of a single keyboard that supports many Latin-based languages, rather than switching keyboards for each of them. You'd want to use one method or the other, but probably not both. So why would anyone make the choice you want to use available only if you first choose the one that you don't want to use?

But of course I'm not privy to the internal decision-making process at Apple, so I'll probably never understand it.

I still have to find a solution to a follow-on problem: For several hours this afternoon, while working in French, I found that opt-6 produced a circumflex as the Keyboard viewer says, but only for i, o and u. When I tried to use it to get a circumflex over an a or e, it ignored the opt-6 and the following letter, plus several more character, and then returned to normal as if I hadn't typed any of those keys. About an hour ago, this problem went away, for no reason that I can guess, and â and ê now seem to work fine. But since I don't know what caused and then corrected this, it'll probably happen again.

Anyway, I should give a tentative thanks for the encouragement via examples of how it's supposed to work. But the idea that it's all dependent on first selecting a few other languages' keyboards, which you will then ignore after "US Extended" finally works as described, is a bit troubling. I hope I'm interpreting it wrong, and it's not actual that weird. But I never saw the large set of dead keys until after I did that, so it looks like some sort of enabling trigger was pulled that changed the "US Extended" keyboard.

It might help if there were an easy way of finding an explanation of it. Do all customers who use eastern European languages find it this difficult to get it working right? Or do they all use their "native" keyboard? I know a lot of people who use those languages here in the US; maybe I should ask some of them what they know about it.

As an alternative to US Extended, you could consider the Character Picker, a popup menu which will appear when you hold down the key for a base letter in OS 10.7 and higher. I think the options it offers may cover the languages you need.

3
Some native keyboard accent shortcuts not working since OS X 10.11.3 Update
3
How to use Windows US-Intl keyboard layout on a Mac?
2
US Extended Input Source missing
0
US Extended overlay or decals

5
Strange behaviour from delete key on a non-apple keyboard
2
Where's the # key in Lion
2
Japanese MacBook Stop Switching to Japanese Language
2
How to input accented characters to an OS running in a VM?
8
Keyboard and Trackpad stop working on brand new Macbook Pro with Mavericks?
3
How to do SMC reset when keyboard is not working?
3
How to use Windows US-Intl keyboard layout on a Mac?
1
MacBook Pro won't recognize USB keyboard any more
0
How can I obtain the backslash with a US keyboard configured with a Spanish (ES-ISO) keyboard layout?