I've got a 2012 11" i7 MBA. This is a great little machine but one thing has been driving be absolutely batty about it... The USB ports work well for the most part, but inevitably I will plug in a USB device (could be anything. Thumb drive, USB serial port, JTAG cable, USB2 or USB3 device, doesn't matter) and it will power up (LEDs blink, etc.) but the device is not recognized by the Mac.

Looking at dmesg, I see this:

At this point the USB port is kaput. Unpugging/replugging the same device or another will show similar messages. The only solution seems to be a reboot. Putting the Mac to sleep doesn't help.

I've got the USB logging driver installed to try to help diagnose the issue but I am not seeing anything that I could call a smoking gun, and trying to reload the USB kexts does not help either.

This issue was present on my old 2011 MBA as well, and the issue has persisted from 10.7 to 10.9. Both ports will eventually do this, which makes me believe that it isn't a physical port issue since one port is on a separate I/O board and the other is on the main logic board. I've tried to connect the device through an external USB2 and USB3 hub (tried both) and the problem will eventually occur in these situations as well.

I'm fairly technically savvy, but not necessarily at my best on OSX. I can gather more information if someone were to help me determine what data is appropriate to help debug the problem. I've also done the usual NVRAM/SMC resets, fix permissions, etc... doesn't help.

Has anyone else run into this? What information could I provide to help diagnose the issue? Does anyone know of a way to fully reset the XHCI controller in this situation to try and recover without needing the reboot?

Adding the bounty certainly got this question the attention I felt it needed! Thank you for all of the answers so far, but I think that there are some important misconceptions that I'd like to address:

I develop electronic hardware and software for a living, including USB 3.0 devices. I'm familiar with USB root port drivers, but not at all familiar with low level (kernel) development on OSX.

Good news: you don't have any problems with your hardware. Or software, permissions, etc.

The issue is, believe it or not, exactly what the error message says:

the USB hardware ran out of device slots

You're probably under the impression that something like 127 USB devices can be used with a single controller, since that's what all the marketing material says. But that's actually only true in a single very specific and probably mostly theoretical configuration. USB devices support, at a maximum, five connections in a tiered-star hierarchy. Hubs are not passthrough devices, so they count against this number, as do any internal components which use the USB bus, and any devices which use more than one device profile (even if it's only a single physical connection).

How could I know you don't have a problem with your hardware though?
Why, because I have the same machine, and I was able to reproduce the error! 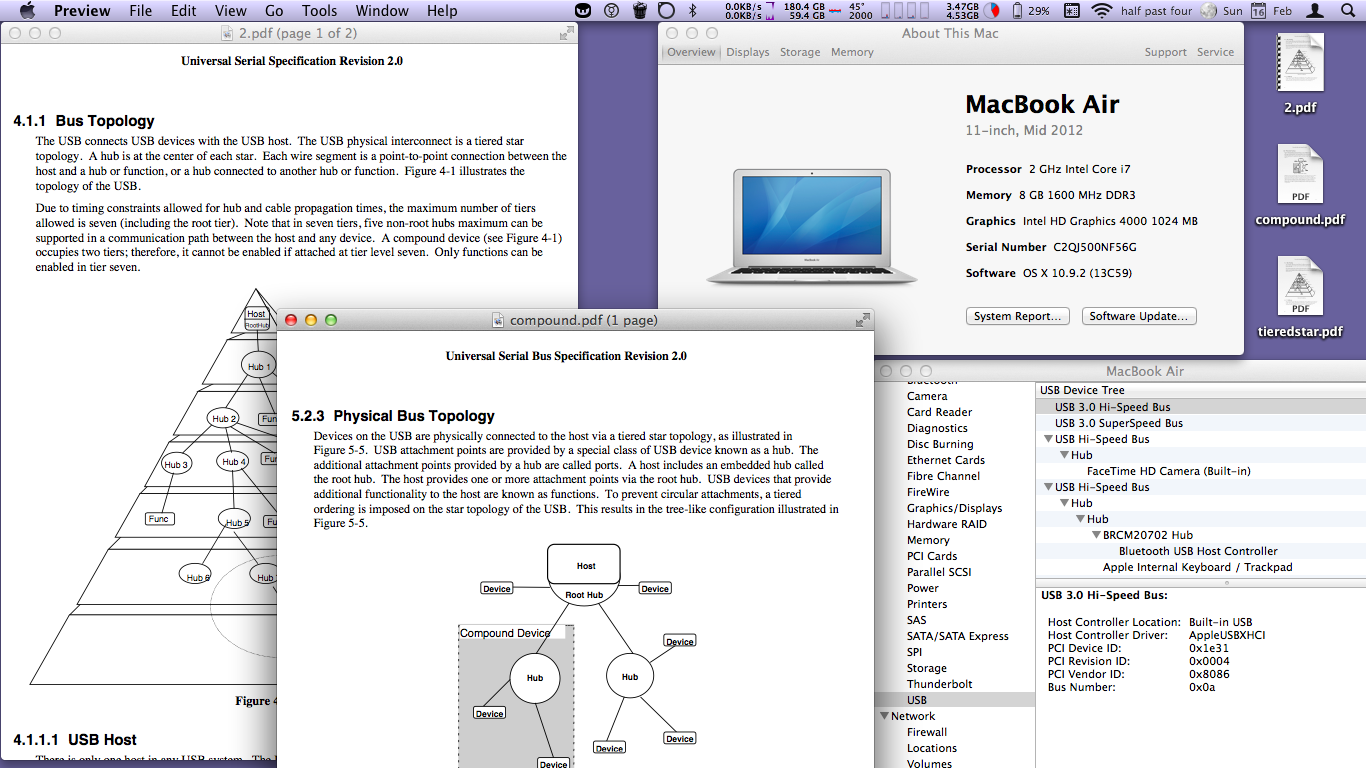 If the issue seems to be sporadic you're probably running into a couple of other issues too:

If you don't want to see this error again:

Follow those steps and I basically guarantee this issue will go away.

To answer to the clarification that this is a developer question.

So: The log snippet posted does indicate what I addressed above: too many USB 3.0 devices connected to the root XHCI hub.

(The QS77 chipset supports 4, and there are 2 in use inside the machine.)

To "reset the XHCI controller" (technically its a kernel, not controller, issue):

however, that's not going to do anything if this is happening with USB 2 devices as well, in which case that its:

and if its both, well, neither of those.

When I say I can reproduce the issue, I mean that if I overload the XHCI bus like in the log snippet, I get the same error message. And I wasn't assuming necessarily you were using a bad hub — it equally that you might need to get a good one, because the root hub has too many connections.

Beyond that, however, I think we're getting into the realm of a wiki question to the effect of:

How do I debug the kernel and device drivers on Mac OS X?

As thats more the issue, nothing to do with the MacBook Air per se or even necessarily USB.

I might try my hand at writing one (not really my expertise but I've done it a few times) But it'll probably be a few days for that. Meanwhile, take a look at:

Would I be safe assuming that you migrated the OS off your old Mac onto the new MBA and that you have upgraded the OS rather than done a clean re-install? Or perhaps migrated users or apps.

I suspect an extremely low level OS problem. If you have an external drive then put a brand new OS install on it and boot from that for a few days and see if the problem disappears. If it does then do a clean install on your MBA and migrate nothing, copy your data, and install only your most necessary apps from install media rather than your old OS. It could well be you have some nasty or broken app that is causing the problem so add them back slowly and always from brand new install files.

easy fix would be to:

do a time machine backup then format your hard drive and then to reinstall your os.

when the account is set up, start migration tool and select your home folder, and try to skip anything unimportant

done, this should almost certainly fix your issue permanently

(diskmaker x) a great utility to create a bootable mavericks drive so you don't have to download mountain lion first! if going with this approach use alt instead of cmd+R

Not the answer you're looking for? Browse other questions tagged macbook-pro hardware usb .

5
USB Port of Macbook frequently stop working
2
Can I use a USB to HDMI converter to set up 2 external monitors on my 2015 Macbook Air?
4
FTDI USB device not removed after unplugging
2
Using USB splitter with USB-C Macbook pro 2016
2
Should a USB Switch work with late 2018 Macbook Air
0
Connecting to MacBook Air 2017 with usb-c connection
2
Macbook Pro with failed USB ports - cheapest way to get some functionality