Does OSX Mavericks prevent third party software from having a "Save as" option?

I'm considering upgrading some of my machines from Snow Leopard to OSX Mavericks (and possibly buying a new Mac Pro), but I'm extremely concerned about losing the "Save as" option in third party software such as Photoshop, After Effects, Avid etc. My question to anyone running Mavericks is this: Have you come across any piece of software that still has a "Save as" option? (If anyone has had experience with an Adobe product running on Mavericks that would be even better).

The answer to this question is complicated. Way back in Lion, Apple began to offer optional API's to software developers that would make it easier for applications to manipulate different versions of saved documents. The most noticable repurcussion of these updated APIs was the replacement of the Save As.. menu item by Duplicate and Rename... menu items. For those interested in the details, the best guide is the relevant section of John Siracusa's masterful Lion review. However, use of these new APIs was optional, and the old functionality is still supported in Lion, Mountain Lion, and Mavericks.

Most non-Apple software still uses the old Save As menu for now, but in Mavericks some of the Apple applications have migrated to the new Duplicate menu. As far as I know, Apple has not announced any plans to make the Duplicate model mandatory in the future, so this inconsistency is likely to stick around for a while.

Bottom line: In Mavericks, most applications still have the Save As... menu item.

Photoshop in Mavericks, using the familiar Save As... menu item: 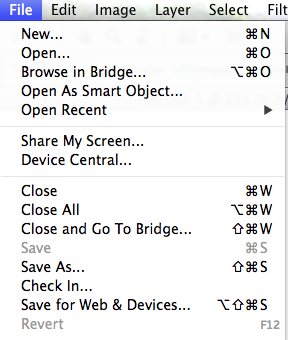 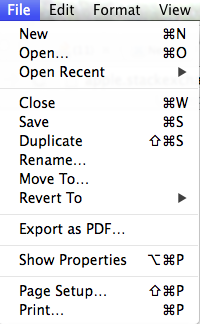 Third-party applications don't lose their "Save as..." option. I use Photoshop and Illustrator CS5, and both still have "Save as". So do the apps in Office:Mac 2011. I did a quick glance at my apps and couldn't find any app that did have "Save as..." before Mavericks that didn't have it after I upgraded.

Not the answer you're looking for? Browse other questions tagged macos adobe-photoshop .