I'm trying to download some videos from the iTunes Store onto my iPhone.

As part of the (UK) 12 Days of Christmas promotion, I received a copy of the first episode of Sherlock, which I purchased but didn't download at the time. When I wanted to watch it, I attempted to download it first. I went into the Videos app on the iPhone, and selected TV Series where it was listed, along with the other 2 episodes in Series 1. Selecting the name of the episode I owned started to stream it, but I wanted to download it instead. Nowhere could I find the download button. Hitting Read More under the episode description didn't help, and I eventually gave up.

So next I thought I would view my purchase history in the iTunes store, and select it from the list of videos Not on This iPhone, which should be short, as I've only ever bought a couple of videos. Sadly, hitting the Purchased link doesn't take you to a list like this like it does on the App Store, instead it flips you out of the iTunes Store and into the Music App, and shows me the Purchased Playlist.

A bit odd that the App and iTunes stores behave differently, think I, but no matter. However this list is empty. I select < Playlists to view all playlists, and there are 2 that are named Purchased (and no others, I don't use that feature at all). Checking both reveals that both are empty. There is a clear button, but I am certain I have never used it. I purchased the remainder of the series at this point, so see if it showed up in either of these playlists; it didn't.

[Edit: I have since discovered that the above behaviour applies when choosing More > Downloads > Purchased in the iTunes Store, I totally missed the separate More > Purchased item further down the menu that behaves as I would expect - still odd that they do different things and one doesn't work at all though]

So, I then turn to hitting the iTunes Store directly and manually searching for the episode in order to download it, which works but is cumbersome and relies on me remembering exactly what I am looking for - if I had a larger past purchase history I imagine this could be a pain, or if for example I was part way through a series with a large number of episodes and wasn't sure exactly which I was up to etc.

Anyway, I downloaded 1 episode, and started to download another, then headed back to the videos app to watch the first and behold, there is an icon showing the download progress for the 2nd episode. Checking on my iPad shows that on this device to the right of an each episode I get the standard download icon, but it's missing on the iPhone totally, and I hadn't even noticed it was missing. 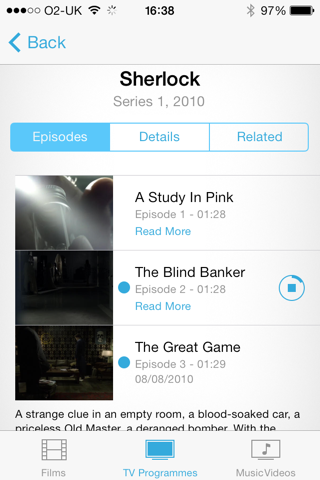 When the download completed, the icon disappeared. I can watch any of the 3 episodes shown in the screenshot, but although the first 2 are now downloaded and the 3rd streams, there is no way to know which is which, the only clue being an initial delay in buffering contents when streaming. (I have since watched the first episode, and even the unwatched/watched/part watched icon is missing, but the 2nd and 3rd episodes both show an unwatched icon, but no indication that 1 is downloaded and the other is not - this page now looks exactly like the screenshot, only without the download progress icon)

Further Info: Since posting the above, I played some more. In the movies section of the app, when I select a movie I get the choice to play and a download icon too. For music videos, I get a list just like with TV programs without the download button. However, when I start to stream one, then exit out, I don't return to the same screen, but instead am shown one that looks more like the movies screen layout and the download button appears!?

So, question time! What's going on with the download icon and indication whether it's going to play or stream when viewing my purchased items directly in the Video app, why does the iPad show it but the iPhone does not? And why are my purchased playlists empty when in the Music app?

If nothing else, can anyone with an iPhone 4 try to replicate this problem, to see if it's just me, or if it's a replicable issue for anyone with my combination of HW/SW?

Hmm, good question! In my experience, this has happened many times. It is possible it is because of not enough space, or it would take a lot of space, causing this reaction to take an extremly slow time to download. Also, it might not appear because you leave it as it is taking its time to load, possible being a reload of page you are on.

Not the answer you're looking for? Browse other questions tagged itunes iphone video ios .

2
iOS iTunes latest podcasts not showing up
5
Delete a purchased file from ITunes Download Queue without downloading file
4
Can I re-download an audiobook that I purchased from iTunes again?
1
Unable to download podcast after iTunes previously crashed while downloading it
3
Can't get TV show name to display
1
how to view Apple TV purchases in iTunes?
2
How to get iTunes to stop trying to download purchases
7
WWDC videos on Mac
3
A purchased and downloaded iTunes television show will not play