I stumbled upon some instructions in the book "Pro Git"

I found out that Mac OS's bash DOES NOT read scripts inside /opt/local/etc/bash_completion.d. I put the file there (I created all the folders, because they didn't exist) : 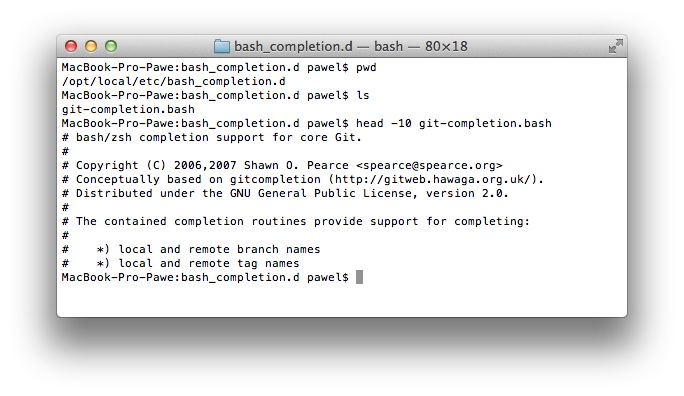 Does Mac OS X's bash read scripts for all users from /opt/local/etc/bash_completion.d ?

Is the "Pro Git" book wrong ? Can I report it on their Github page ?

Bash only reads scripts by default in your home directory, or if they are missing in /etc. See Bash's documentation. If using OSX's Terminal.app then by default it reads ~/.bash_profile.

This is true of all bash on Linux or other OSes.

To read from another directory e.g. /opt/local/etc/bash_completion.d you have to edit your start up files to source (i.e. include) the files from there

The instructions for the script do not mention /opt/local/... which is a non standard location on any Unix. (by non-standard it is allowed to be used by third party packages but not defined what should be in there) They say

The progit quote assumes you know bash. All it is saying is put the files from the first quote into a specific place if you want all users on the machine to use them and not in ~ where only the user installing it can see them. i.e. the point is multi user versus single user.

He also picks that path as nothing else uses it and you should not edit /etc files in OS X as Apple's OS upgrades could overwrite them so you need to choose another place. (I would have chosen something under /usr/local as there is where manually maintained scripts are meant to go).

~/.bashrc is the correct place to edit and add the source. See your other question and the bash manual for setting up ~/.bash_profile The bash suggested way is source .bashrc into .bash_profile. Note that on OS X using Terminal.app is not the one way of running shells so there can be sessions starting with .bashrc.

The core bash completion files are not installed as part of OS X so there is nowhere to add your git completion for it to be picked up by the core.

I apologise but I'm not sure how I installed bash completion but I think I used MacPorts, you can also use Homebrew.

I do have the folder /usr/local/opt/bash-completion/etc/bash_completion.d which contains completion files for a number of command line tools. The bash_completion function certainly reads all the files in this directory.

So you first need to install bash-completion then the git completion file and all will be well.

Since none of the above answers got your check, why not move over to zsh which has a more uniform completion stack.

Yes the bash book needs to be corrected and yes, you have to do more work to get that working universally, but for most people having one account working seems good enough for bash.

Not the answer you're looking for? Browse other questions tagged macos terminal bash script git .

270
What are the practical differences between Bash and Zsh?
104
Why doesn't Mac OS X source ~/.bashrc?

459
git auto-complete for *branches* at the command line?
8
Bash not running script at /opt/local/etc/bash_completion.d/
21
Is there any way to save Mac OS X preferences into a shell file?
0
Is $PATH just a file with a list (in order of preference) of directories?
1
How to get a terminal general auto-complete function?