This drives me loopy. Sometimes (see below for when), Excel gets fixated on some cell formatting and starts applying it every time I fill in any new blank cell.

I don't think this happens on Excel for Windows (though it's ages since I used the Windows version much). I'm looking for some way to stop it doing this.

1: Set up a simple excel sheet with groups of, say, columns, and mark them as groups with formatting e.g. background colour.

Excel decides that it likes that background colour so much, it's going to apply it everywhere from now on.

It's not just background colour:

It picks up the formatting from the last cell it entered text into, or the last cell formatted, then gets stuck and starts applying it after entering text to any new cell, like trailing mud across a carpet.

It doesn't only wreck things like columns: it also causes big problems any time background colour is used for anything meaningful e.g. to mark the status of a project:

Is there a way to stop it doing this? To get Excel to stop applying formats to empty cells I enter text into, and just leave their formatting how it is?

I've hunted through options and browsed online, but can't find anything related.

While creating the examples for this question, I noticed it looks like Excel is looking for patterns, then assuming I want to continue what it has decided to think is a pattern.

It seems to have two rules: "One thing, something else, then that one thing again always means start doing stripes and never stop"... 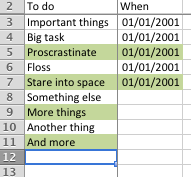 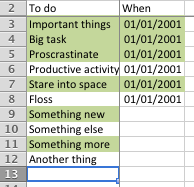 ...and "Two or more of something in a row when there has been a total of three of more of that thing always means carry on doing it forever". 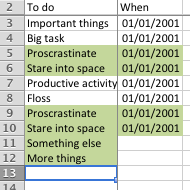 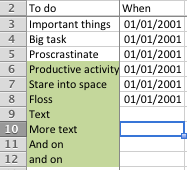 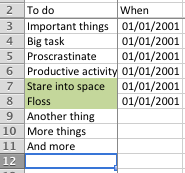 Oh, and it does it even if you skip a row or column: 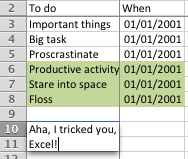 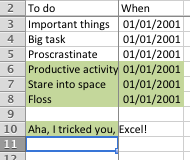 I just want it to stop.

Please, help me make it stop.

Found it! It's a setting under Preferences > Edit:

Misread it as "date ranges" on the first trawl through preferences. Turning it off stops this happening.

The comment about formulas seems to only mean that it doesn't fill empty cells with formulas when it thinks it's seen a pattern. After turning it off, it still does other automatic format adjustment e.g. incrementing formulas copied across a range:

It is correct that excel is looking for repeat pattern, and trying to help you by applying the last used = AutoComplete.

If you do not want it to do that turn that feature off. 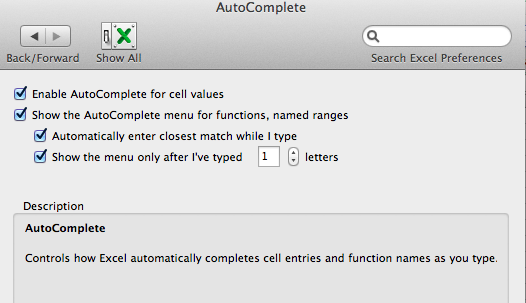 Not the answer you're looking for? Browse other questions tagged ms-office .

4
Ribbon tabs in Office/Word/Excel 2011 stop working
8
What is Format Painter shortcut in Excel 2011 for Mac?
4
Excel Data Analysis ToolPak available for download for Microsoft Office for Mac 2011?
3
How to change default cell formats in Excel 2011?
1
Shortcut for conditional formatting in Excel 2011 in OS X
1
Excel for Mac 2011 calculation results equaling zero are formatting as a positive zero value instead of zero suppressed zero?
0
How to include a tab in an Excel for Mac cell - Mac equivalent of char(9)
0
How to move cursor to the end of the line in a cell in Excel for Mac 2011
1
Headings and numbering glitch(es) in MS Word for Mac 2015 Version 15.18
2
Excel 2016. Automatically creating ranges based on cell contents then conditionally formatting the range