How to use iSight webcam without activating the green light?

Recently a the Dutch government advised to put a tape on your webcam to prevent hackers from taking pictures and video using your device (news article in Dutch).

The build in iSight camera in Apple laptops have a green light next to the camera, this light turns green when you use the camera.

Is it possible to use the camera without the activation of the green light? Personally I think the green light turns on when the sensor requires power and this is hardwired in the hardware. Am I wrong?

I have found similar questions on stackexchange, but I found non that answer this specific question.

"iSeeYou: Disabling the MacBook Webcam Indicator LED" is a paper by Matthew Brocker and Stephen Checkoway from the Johns Hopkins University. In this paper they explain on how to disable the LED when using the camera. In short: normally you use the CPU to access the camera and activate the LED, but you can also use the processing unit in on the camera board itself and this will not activate the green LED. The authors also provide software to protect you against these problems.

iFixit had the same question and their answer was also based on the same paper:

according to the researchers, the vulnerability they discovered affects “Apple internal iSight webcams found in earlier-generation Apple products, including the iMac G5 and early Intel-based iMacs, MacBooks, and MacBook Pros until roughly 2008.” While the attack outlined in the paper is limited to these devices, researchers like Charlie Miller suggest that the attack could be applicable to newer systems as well. “There’s no reason you can’t do it -- it’s just a lot of work and resources but it depends on how well [Apple] secured the hardware,” Miller says.

In short: Yes, the iSight can be used without green light as it is not hardwired. 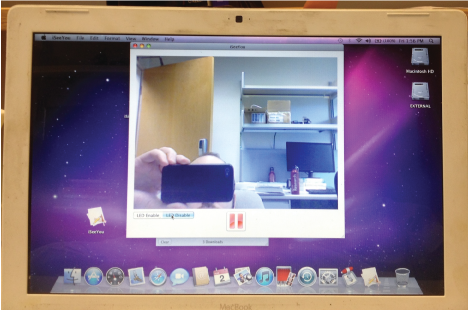 My understanding is, it depends on the model of your Macbook. The ability to turn the camera on without the green light was only proven in pre-2008 laptops. No proof exists that you can do the same in post-2008 laptops.

This question Are there privacy concerns with the Built-In iSight Camera and LED Indicator? seems to agree that newer models you can't.

Not the answer you're looking for? Browse other questions tagged hardware software webcam screensaver .

0
How to turn off the iSight indicator when I'm using the Camera?
14
Does a modern MacBook's green "camera light" always turn on when the camera is activated?
10
Are there privacy concerns with the Built-In iSight Camera and LED Indicator?
1
Still possible to override iSight webcam LED for iMac's and Macbook Pro's 2019 & 2020 & on?

0
Why does the webcam on my Dell SX2210 go all green and purple?
5
How to show a notification when the iSIght webcam turns on?
0
Import new signature without using isight
2
Macbook Webcam light turns on for a second when computer is waked
3
Use USB webcam instead of built in FaceTime webcam
14
Does a modern MacBook's green "camera light" always turn on when the camera is activated?
3
Watch Mac's iSight (webcam) on another Mac over LAN
1
External iSight camera with M1 Mac?