I'm having trouble with deleting my pictures.

The initial problem is that after updating to iOS7 all my Photo Albums are stuffed up. There are like 2-3 instances of the same albums with different number of pictures. For example "Album A will have 200 pictures" and as I scroll further down I see another instance of "Album A" but this time it only has 197 pictures.

So I decided to do a clean restore of all my photos. I unsynced all albums and removed all pictures. And then I resynced it again with the albums which I wanted. This seemed to fix the problem temporarily. The albums will sync properly at first but I see a "Restoring" at the bottom of my photo album after clean up. 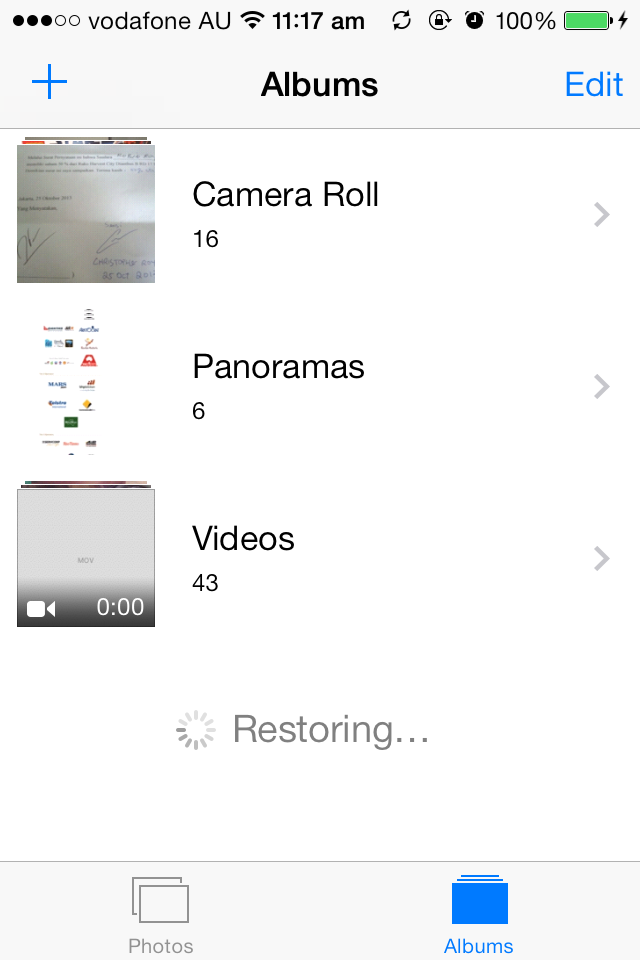 After about 30-60mins the Photo Albums will revert to the old way with doubles and triples of my albums.

I'm not sure what this error was and I keep trying to go to settings and see if there are any backups of my Photos. But I have switched off iCloud sync of photos etc.

If anyone could help me and point me in the right direction to fix this I would greatly appreciate it.

I was looking further into this and I found out that on my Macbook Pro's System Preferences. In the iCloud settings, the "Photos" setting was checked and in the Options next to that, the "My Photo Stream" and "Photo Sharing" was also checked.

I think this was the main problem. After I used iTunes to sync with the photos maybe there was some cache settings or something residual left on the iPhone which let to it being continuously restoring.

This is the fix which I used. It is fine now.

Hope this helps for anyone having this problem.

I've had the exact same problem with my iPhone 4s. I think my problem also started after I updated to iOS 7, when I noticed that albums contained the wrong photos (photos not included in albums created in iPhoto).

I also tried deleting the iPod Photo Cache, and (in iTunes) choosing to sync photos from an empty folder on my iMac. And I also turned off iCloud streaming options on the iPhone, but to no avail. After synching with iTunes, I would see "Restoring..." in the Photos app, and after a couple of hours my 15-gig library of photos would reappear, with albums containing incorrect photos. This happened even when the phone was in airplane mode and not connected to my iMac, so I'm not sure where the photos were coming from.

Today I finally decided to use iTunes to restore the phone (following Apple's instructions: http://support.apple.com/kb/HT1414). After connecting to iTunes, I first did a backup of the phone to the iMac, then used the 'Restore' button. After iOS 7 was reinstalled, I restored the backup I had just made. I was leery of doing this, in case the backup was corrupted, but I didn't want to start from scratch.

It turns out this fixed my problem. The 15-gig library no longer tries to restore, and I've started putting back some albums, and they seem to contain the correct photos. I wish there was something else that worked, but a backup and restore seems to fix the problem. The photo library must have been corrupted when I did the initial update to iOS 7. Good luck.

First, check if their physical footprint still exists. Go to Settings > General > Usage and check the amount of storage available, do you notice that there is a lot of used storage ? You can also check it through iTunes, which might show used memory labeled as Other.

I lost all my pictures and videos after jailbreaking my phone, yet iTunes showed that they are still taking physical memory (labeled as Other - iTunes did not recognise my pics or vids anymore). This means they cannot be viewed via Camera Roll but they are still stored in the phone.

To fix that, download iFunBox ( http://www.i-funbox.com ) and use it to locate and extract the images from the phone (no need for iTunes to access the phone). I managed to extract all my photos from the phone to an external USB, which accumulated to over 20GB of photos and videos.

Use this method and you should recover your photos and videos with no previous backup. If your phone shows that there is a lot of empty storage, then your photos might have actually been completely removed.

Not the answer you're looking for? Browse other questions tagged iphone itunes icloud photo-stream .

4
Can I change the location of the iTunes iPod Photo Cache folder?
3
How to send existing photos to photo stream?
2
Missing photos from iPhoto sync in iTunes to iPhone
5
iTunes sync does not delete songs
6
Managing pictures and videos between my iPhone and iPad
3
Bidirectional Sync of iPhone/iDevice Photos and Albums to Third Party Clouds
4
Importing a shared photo stream into iPhoto creates duplicate photos
0
Sync photos between iPhone and OS X
1
Sync photo albmus between Mac and iPhone