Can't restore to backups after removing disk in Time Machine

I've been using a WD 2TB HD for the last two months to handle my Time Machine backups for my Macbook Air. Yesterday, I wanted to set it up to handle backups through the network. In the Time Machine interface, I selected "Remove Disk" for this WD drive and confirmed "Stop Using This Disk" in the following confirmation. This confirmation states that "Your existing backups will not be deleted."

After playing around with the network setup, I found it wouldn't work to my needs and decided to just get the drive set back up with my laptop. After clicking "Select Backup Disk" and then "Use Disk" for the HD, it's as if that drive has never been used before. See screenshot below:

Furthermore, when entering into Time Machine, none of my backups appear in the UI. When browsing the drive through the Finder, the Time Machine files are still there, so I know that the data is not lost. I just can't access it.

What can I do to get everything back up and running again like it was before?

Update 12/29/2013. Additional info: here is what I see when I click "Select Disk" again, after I've re-added the drive. As you can see, the drive appears twice, once as a Time Machine backup, and again as a regular drive. 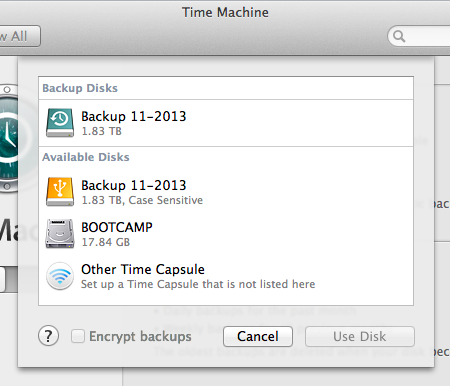 Update 12/30/2013. I am now able to access previous backups (by using Kent's recommendation of using option plus clicking the Time Machine menu bar icon), but the interface is so slow that it could appear to be not working if one wasn't patient enough. Something blocking on the main thread, perhaps?

The main issue to solve now is how to get incremental backups working from the last full backup made to the drive, instead of starting from scratch.

To access the previous backups, press the option key when clicking on the time machine menu bar icon. You'll see an item to browse other time machine disks.

Not the answer you're looking for? Browse other questions tagged macos time-machine backup hard-drive external-disk .

2
Command Line method to backup using two Time Machine disks
3
How do I repair a corrupt Time Machine sparsebundle that is only showing the most recent backup?