Why does OSX use 6GB of RAM after restart? 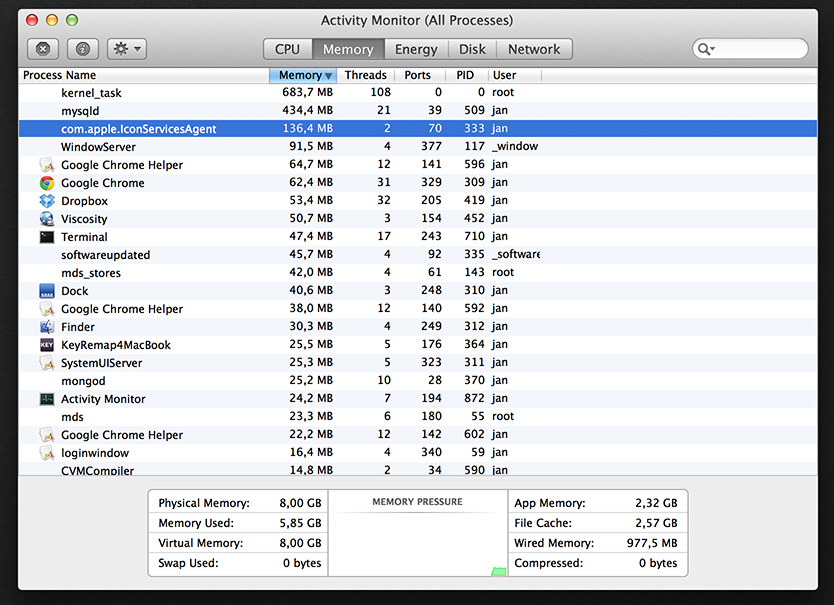 Since reboot, OS X now consumes 6GB, which leaves me almost no memory to do any work.

Is there anything I can do about it?

EDIT: Just had it crash again. I only ran Chrome with few tabs, and my super lightweight workspace. The trouble is, workspace lives in memory, so when system crashes, I lose everything. I guess I have to throw this shitOS away, and get a proper PC with GNU/Linux.

Memory being used doesn’t mean the memory can’t be used for anything else. Mavericks will put idle memory to work if it can.

For instance, 2.5G is being used for file cache — storing files in memory so it doesn’t have to hit the disk for them. As you consume more memory, that will go away.

Now, if it crashed on you due to swap pressure, you may not have enough memory for the work you’re doing with the machine (Or maybe not enough free disk.), but there’s no indication you have a problem right away.

I have 4GB on a non-retina MBP. It’s been up for four days, I run a fair amount of crap. It’s using 3.96GB of that memory, and hasn’t touched swap at all. (It’s also compressed about a gig of memory.)

Not the answer you're looking for? Browse other questions tagged macos memory .

0
Macbook Pro doesn't wake up from sleep, RAM slot empty after force restart
10
Why does OS X use virtual memory when I still have free RAM?
7
Why does free + active + inactive + speculative + wired not equal total RAM?
0
OSX Mavericks using up RAM
1
Is my BootCamp-ed Windows seeing less VRAM than my Macbook (Pro, 13", mid-2014) actually has? If so, how can I make it see that it has more?
1
Getting 3 beeps on restart after RAM install... is the RAM really bad?
11
What is AXVisualSupportAgent, and why does it eat my RAM?
2
Why does my Mac use so much swap space?