I have a 3rd Gen Airport Extreme (802.11n 3rd Gen Dual band) as my main router. Attached to it are an Airport Express (802.11n 1st Gen Single Band) which is connected by and extends WiFi over it's wired ethernet, and also an Airport Extreme (802.11n 2nd Gen Single Band) which extends wirelessly. I run a dual band network, the 2.4GHz network which is extended over the 2 slave devices (for want of a better description), and the main router also has a 5GHz network as it is a dual band router, and the guest network (which is an open network, no security).

In Airport Utility on iOS devices (I don't currently have access to a Mac to test the OS X application) I can select a device, select Wireless Clients, and list any clients that are connected to that particular device (from an access point perspective).

One problem with this is not seeing how can I identify which device is being shown in the list? Most attached devices will happily have a real description, namely iOS devices, Macs and some PCs etc, but I have a whole load of devices for which I cannot easily identify what is being connected. For example:

My reasons for wanting to do this are varied:

So, the problem for which I am asking this question is as follows:

I have tried to use DHCP reservations against a PC that only ever shows up with the MAC address, to see if it wil then pick up the description, and it doesn't seem to.

I have set a year long lease on my DHCP, so should be able to identify individual devices with some accuracy etc to stop devices sharing an IP address

Everything uses DHCP, the only hardcoded IPs are the routers themselves.

It seems there is no way to force a client ID at the router end, so you have to make do with setting it right on the client. I discovered that my Apple TV and Playstation has spaces in the names that prevented them from setting the ID properly. Taking the spaces out made them show up properly. However, some clients manage to register names correctly with spaces, so I guess it's down to the implementation of the IP stack on the client device rather than a server issue.

It's also worth noting that after updating settings or resetting the routers, it appears to show just MACs until it has time at some point doing a lookup against it to set the ID. I found no way of working out how long this is, seems to be random.

It's also worth noting that some devices that are able to use Wake On LAN over wifi and that are currently in a sleep state will register at a Physical layer, so the router is able to send the relevant command to wake it, and as such the MAC is shown, but no IP (and hence no active DHCP use to pull the ID) until the device wakes and pulls it's IP/registers it's client ID.

Finally, using an old version (5.6.1) of Airport Utility it is possible to view a DHCP lease list of all clients, not just active wireless connections. Sadly it doesn't work on Mavericks, but you can bodge it to make it work. Unfortunately, either it does not track the DHCP leases for the guest network, or the lease length (not configurable) is short so pretty much only actively connected guests are shown in this list. 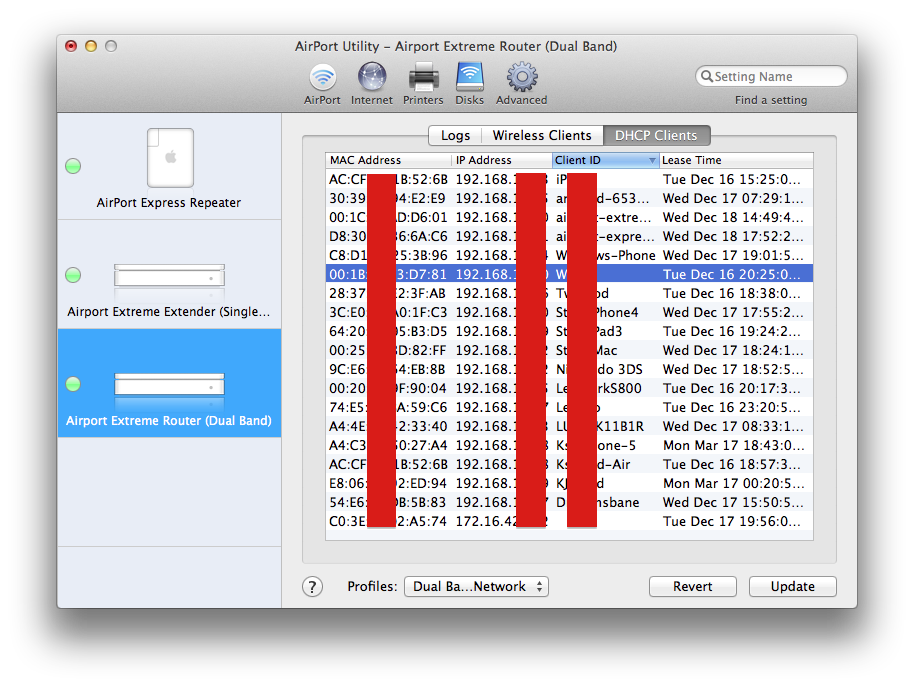 Not the answer you're looking for? Browse other questions tagged network wifi airport .

3
Airport Extreme Guest Network and Dual-band
9
How can I get the name of connected devices on an Apple AirPort Extreme Base Station?
1
Apple Airport - Access DHCP from ethernet connection?
1
Macbook choses 169.254.x.x when the range is really 192.168.2.x
0
DHCP on Airport Extreme
0
Can I extend my guest network with an Airport Time Capsule?
2
Advantages/disadvantages of having AirPort/Time Capsule between ISP router and LAN devices?