Is there a "Voice Recording" application for IOS which can specify a moment while recording?

Is there a "Voice Recording" application for IOS which can specify a moment while recording?

(By way of illustration, when I am recording voice and the time of recording is 2.12.23 I want to pin this time in order to, refer to that time easily after finishing the recording .) (it should be noted that I prefer pining/specifying the time would be just by pressing a button)

Yes there is! CaptureAudio does exactly this. It is a US$3 app for iPhone (also works on iPad, it’s a universal app, no separate purchase).

Just to avoid even the appearance of impropriety, let me state that CaptureAudio is a past-sponsor of a podcast that I do. That being said, their sponsorship slot is over and has nothing to do with me posting this here. It just so happens to be an app that I know which does the exact thing requested.

Usage is very simple, start recording and you get a big button on your iPhone. Tap it, and a marker/bookmark/notation is added to the recording. You can even create different kinds of bookmarks, and each one has different symbols attached to it. 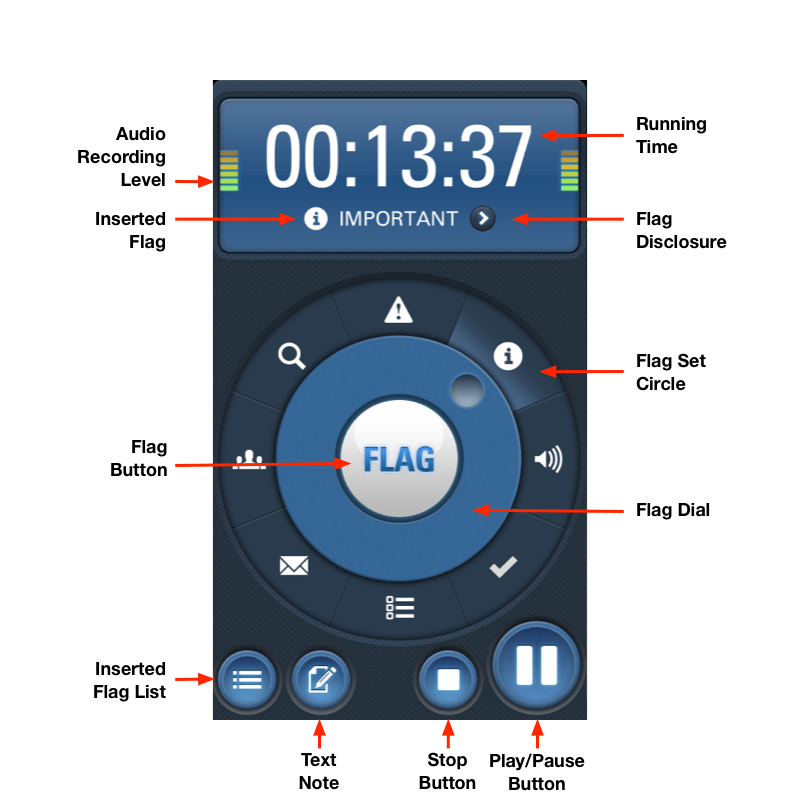 When you are listening back later on, tapping one of those marker/bookmarks will jump right to the spot where you recorded it. (You can see screenshots of that on the website.)

Actually I think it’s even smart enough to jump back a little before the marker, which is good because you probably didn't realize you need to mark something until after it was said!

The app also backs up to Dropbox, which is nice, but I haven't actually used that feature, I've just done everything on the iPhone.

When listening back to long recordings (over an hour), the app does tend to crash sometimes, but this is only on playback not while recording which would obviously be a deal-breaker. I assume that crash is probably related to the iPhone running out of memory, but IANADeveloper, so that's just a guess.

14
iOS 4 - Can I close an app without it staying open in the background?
0
Keyboard Viewer via keyboard shortcut wont actually quit after closing it
6
iPhone 5 iOS7: Prevent screen from locking during voice call
0
Is there an iPhone timer app that works with EarPods remote controls?
1
iOS App Store will not update apps unless the Update button is pressed many times
0
(preferably) free app to lock iPhone for predetermined periods of time