Disable scroll-induced antialiasing in Preview and other PDF applications

Scrolling (with two fingers on the trackpad) in Preview.app (and TeXShop.app) annoyingly blurs PDF text and I would like to disable the over-compensating anti-aliasing. I like the anti-aliasing while not scrolling just fine.

The image below has two Cmd+Shift+3 screenshots from within Preview, the top half with two fingers still on the trackpad after scrolling, the bottom half after releasing them. The boxed snippets were manually enlarged in Photoshop. 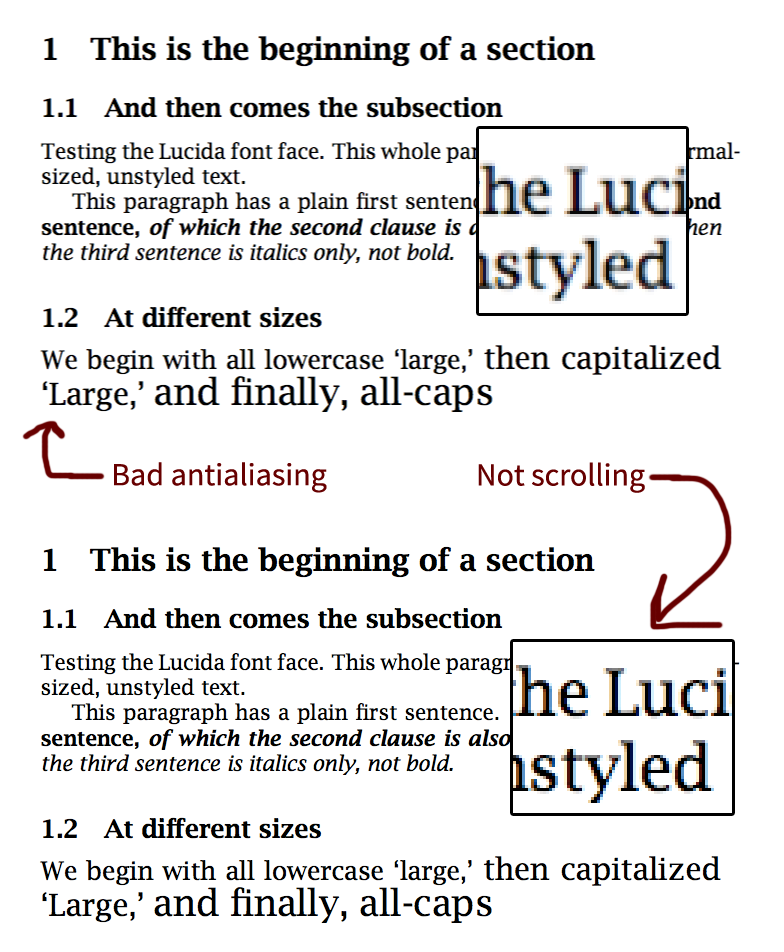 I have also set various defaults values, to no avail (the values below are just one combination of many I've tried):

I would like for scrolling to always look like it does if I scroll slowly, and vertically. The ugly anti-aliasing (blurring) is most likely to happen if Preview registers any horizontal scroll (which is rarely intentional), and was more prevalent before I turned off the two-finder scroll.

I suspect the blurring of text is caused by a low-memory proxy being used to ensure high FPS during scrolling, especially on Retina machines, probably when using integrated Intel graphics.

Therefore I would suggest doing the following steps in the below sequence, in order to maximize available RAM and VRAM:

Note: the purge command takes a minute or two to finish. I've found it can really help to clear up RAM. Restarting does the same thing. Sometimes RAM does not automatically get freed up like it's supposed to without these steps, at least on 10.8.5 and earlier. It may not apply to 10.9 and newer, but it can't hurt to try.

If you would please, both before and after completing the above steps, open Activity Monitor and take note of how much memory, CPU, and disk data per second is being used. Post your before/after figures for Physical Memory and Memory Used in the comments (or Free memory if it shows that). Also let us know if the steps resolved your issue.

This isn't a complete answer, but I read before that you could fix this by going to System Preferences > General and changing Show Scrollbars to "When Scrolling." It seemed to work when I did it, but since then I've noticed it again, so it might not actually solve the problem. It does seem to have to do with it, though.

I think CommaToast has the right idea. OS X is probably using a lower quality rendition of the content when scrolling, to ensure that it can move quickly and smoothly, then refining the image once you are done scrolling. I have absolutely no proof of this, but this type of behavior was extremely evident in early versions of iOS. Apple loves image quality, but they love providing flawless interaction even more.

Not the answer you're looking for? Browse other questions tagged macos pdf preview trackpad scrolling .

2
Scrolling Settings - "Throw"
0
Non-smooth scrolling pdf with trackpad in Preview with 10.8
16
OSX Mavericks horizontal scrolling doesn't work well in Finder?
1
OS X 10.9 Mavericks subtle two-finger scrolling changes (on touchpad)
1
Trackpad gesture to select text
2
How to disable horizontal scrolling on OS X Yosemite's Preview?
5
Scrolling with MacBook trackpad: Is it possible to do with only one finger while a key pressed?
4
preview pdf scrolling (also page up/down)
0
Scroll with mouse in 'less' without clearing the screen