I have upgraded recently to Mavericks, and am setting up Time Machine on this system for the first time (it wasn't set up with the earlier OS, Mountain Lion.)

Time Machine successfully backs up once after I boot the laptop. However, every time it tries to back up again while the laptop is running (I don't normally perform a full shutdown and reboot very often!) it fails with the error message: "An error occurred while creating the backup folder." 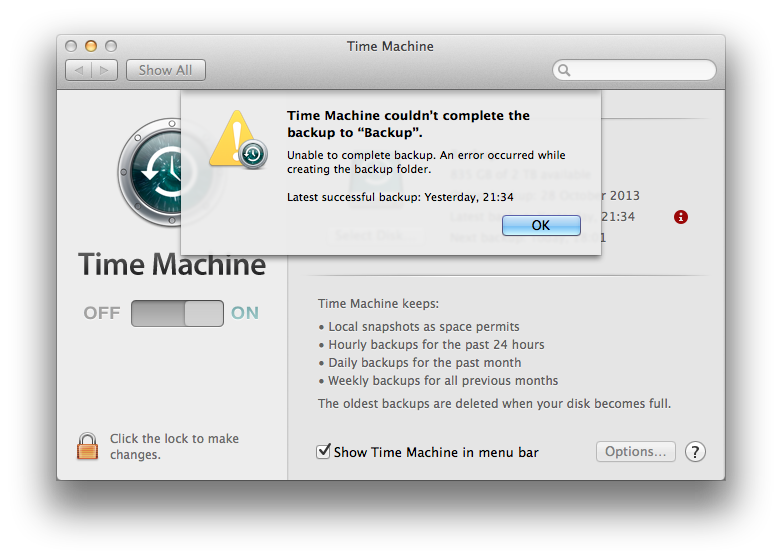 I would like to eject the drive and plug it in again to see if this helps, but clicking the Eject button in Finder shows this message:

and I have not wanted to do a Force Eject. I have rebooted, and Time Machine successfully backed up once after that, only to fail again the next time it tried.

I do sometimes close the laptop lid or put it to sleep with the disk still plugged in, and it is still there when it wakes.

I searched the Console for Time Machine-related errors but could not see any. (The Console won't display system.log saying I don't have permissions, but running syslog -C in the Terminal and scanning the output doesn't show anything either.)

I had the exact same symptoms with a Nov 2013 MacBook Pro (came with Mavericks already installed) using WD "My Passport" USB drives for Time Machine backups. The solution was to erase and reformat the external drives using Disk Utility as described in http://support.apple.com/kb/HT5911 under the heading "Erase and reformat the storage device".

I had a spare drive so, in order not to lose existing backups, I did the following:

After this I have no problem doing multiple backups in a row, putting the machine to sleep without ejecting the backup disk and then doing a further backup, and no problems with ejecting the disk.

I ejected the backup drive by putting in the trash. Then I shut the drive down and plugged it back in. Waited for it to appear. After that I re-selected the disk as my backup and it seems to work fine. I had this problem before and did the same procedure and it worked until I installed Mavericks.

Can't figure out why Apple won't fix this problem as it's persistent every time I do a system update.

I just resolved this error by rebooting my imac. After that Time Machine worked fine.

Not the answer you're looking for? Browse other questions tagged time-machine backup macos external-disk .