Since upgrading to Mavericks, Finder sometimes hangs when I select a folder and am waiting for its contents to populate the window. This happens primarily in Open dialog boxes: 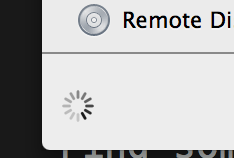 It'll spin for about 15-30 seconds before showing the items in that folder. I can "Go to folder" and it'll usually show the contents immediately in that case. Why does it spin, and is there a way to make it faster? (It should be instant. I don't go to folders with thousands or even hundreds of items.)

Clarifications: These are just regular, local folders, usually in my home directory... not Remote Disc or network shares or anything fancy. It's an early 2013 Retina MBP, so it has a solid-state drive.

There are a number of Apple Support Communities discussions regarding this, and a number of possible fixes given. To summarise in case one works for you:

I don't understand all the specific technical details, but this is apparently caused by ISPs that perform NXDOMAIN interception. Following that forum post, try running this in Terminal:

If you don't get the following response:

...then your ISP is performing NXDOMAIN interception, which is causing the delay.

The procedure to disable the interception depends on your particular ISP. For instance, if you're using OpenDNS (which does interception by default), you can disable it in your account settings.

I was having this exact same problem on my machine, and I was using OpenDNS (but without an account, so I couldn't change the setting). I simply switched back to my ISP's (AT&T) default DNS – which apparently doesn't do interception, since I got the "correct" ping response above – and the problem immediately went away.

(I take no credit personally for this solution; I'm merely reporting it here for everyone else's benefit. It seems to be a very common issue with Mavericks).

Your snapshot shows that the asynchronous progress indicator (throbber) is the portion of the sidebar to draw:

You should be able to focus on the networking and isolate whether this is truly the action that is delaying your work or just an innocent bystander being the next thing to be drawn when the system is otherwise paused and delayed.

To troubleshoot this I would do the following:

Since there are several items this could be - hopefully you can narrow things down or comment if I missed a step or more information on the problem comes to light. Also, be sure you don't have any tools like Little Snitch or Network Link Conditioner as they would clearly exacerbate the rendering of the network sharing portion of the sidebar if misconfigured.

Is it on every drive you have? Because if it is the same bahviour on different hardware? (Behavioural difference between a USB thumb drive and internal disk)

Is the "ls" command equally slow in terminal or instant? (try terminal and cd and drag an example folder into terminal and hit enter. Then type "ls" to see how long it takes to list the folders contents.)

Sorry for the many questions but I'm not (hopefully yet) allowed to comment on questions.

Just seen this post on Tuaw.com how-to-fixing-the-filestatsagent-bug by Erica Sadun

At times, your system may seem to be spinning its wheels. A peek into Activity Monitor (found in the Utilities subfolder of your Applications folder) can offer clues as to what's going on....

..As I discovered, some Mavericks users may find a FileStatsAgent process has been eating away at their CPU. If this happens to you, it's generally due to a corrupt file.

They then go on to explain about using the open files and ports option in Activity Monitor on the process to see which files may be causing the problem.

This may or may not be your problem..

Note: though answer has now completely changed, this is just a late edit. I hope someone will benefit from this anyway.

Found a workaround which actually works, finally, from OSXDaily. To summarize, disabling network share automounting does the trick (at least for my few macs I've got Mavericks installed).

To disable network share automounting, open up Terminal.app and type in the following commands.

What this does (for those less knowledge with command line, Bourne Shell and such) is that it first makes a backup copy of file /etc/auto_master, then edits one line of it and finally signals automounter to re-read /etc/auto_master.

After this you will have to manually mount your network shares. More information in original OSXDaily article.

I've been having the same problem for a few weeks, trying every suggestion listed here and other forums but without success.... until tonight!

TL;DR: Run these 2 commands then reboot.

The problem did not happen when I tried a newly created user account so it pointed to something with my profile. I removed all the Preferences and Caches from my Library folder but the problem remained.

After examining the system logs, I noticed the following 2 errors would often appear when viewing a folder in the Finder.

These are related to creating/loading icons for different file types. The Finder is hanging while attempting to draw the icons for the file listing so it made sense that it would lag if there were problems with the cache. Since the IconServicesAgent isn't an application the user interacts with, the cache/prefs are not saved in the typical ~/Library/ folder but in a special hidden location used for OS-level apps and daemons. Every user has a Cache and Temp folder in this location at /var/folders/. We just need to locate and rename the IconServicesAgent's files.

When a user account is created, the system generates a folder here for the user but named with 32 seemingly random characters. Since they are random, I can't give you an exact path but the TMPDIR environment variable can. (If you want to know, run the command echo $TMPDIR to get the path to your own Temp folder. It will be something like /var/folders/jc/vzc51tfn2jzbzqkr9j3g38gm0000gn/T/ but we don't really need it. The commands below will just use the variable directly)

Now rename the com.apple.IconServices folder in the T [temp] directory with this command.

Next we need to do the same in the Cache directory, which is in the same parent directory as the T directory. This command will do what you need.

So now reboot your Mac and after you log back in, the Finder should be quick again.

I sometimes have a similar problem: Finder is completely unresponsive, i.e., all Finder windows are frozen, and they all show the spinning beach ball.

In that case, for me the only thing that helped was to open Activity Monitor, and kill Finder (i.e., relaunch) it a number of times. Sometimes, I had to relaunch it up to 5 times.

(So far I haven't been able to pinpoint the culprit. I did not have any network disks mounted.)

What my problem seemed to be related to was having a network share connected prior to closing the lid on my laptop, then opening my laptop and connecting to a different network where that share was not available. The share was still shown in the left panel of the Finder window, but was not showing any contents. In the terminal mount still showed the share as mounted. With both Finder and the terminal open, I typed umount /Volumes/USBSTORAGE in the terminal. As soon as I did that, the Finder window became responsive and immediately listed the contents of the local directory that was selected.

It seems there's some code in Finder that gets blocked when dealing with remote storage that also blocks some local file operations.

Not the answer you're looking for? Browse other questions tagged finder macos .

154
How to simulate slow internet connections on the mac
21
What's the canonical name for the "sunburst" waiting animation?
1
Finder freezes for several minutes when opening folder for first time after restart