Why won't an SMS go through in certain geographical areas on my iPhone 5s if it contains exactly 148 or 149 characters?

It took me a couple weeks to track down what was actually going on. At first, I just thought that some messages didn't send perhaps due to network problems; it seemed random and normal. An iMessage with the same content would be delivered just fine. I finally got sick of them failing all the time (I write relatively long messages), so I sat down and worked out what the issue could be. I thought that maybe my messages were failing to certain carriers, making it a problem that is out of my reach. I sent the same samples to one of my contacts for each of the four major service providers - AT&T, Verizon, Sprint, and T-Mobile (oh, and also Google Voice as a bonus). They always failed on the 148 and the 149 length messages. Here are some screenshots to illustrate what happens: 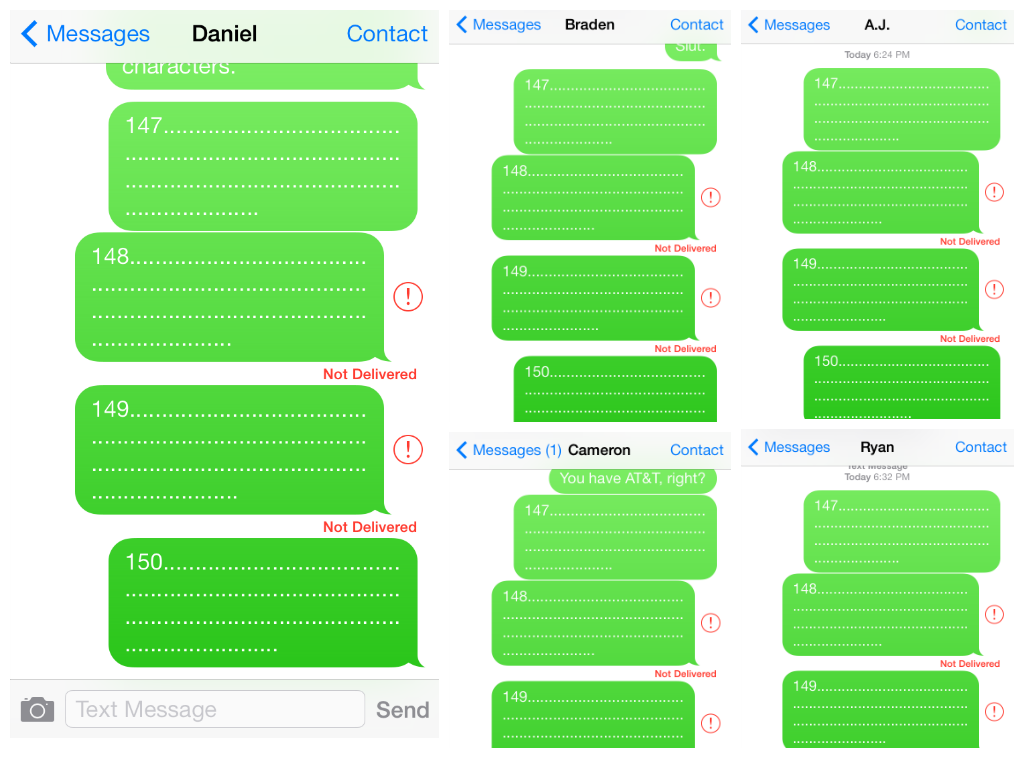 At least for me, it's been 100% repeatable. I tried many other lengths as well, and so far, these are the only two that do this. I thought that it could be a bug in iOS 7, so I had my contacts count out their characters and send the suspects back to me. I received them just fine from each of them. I don't know anyone else with an iPhone 5s, so I can't test to see if it's something with either the hardware, the carrier, 64-bit iOS, or the baseband firmware.

Have any of you experienced this? (I've looked everywhere on Google to no avail.)
To anyone with an iPhone 5s, could you please try this yourselves on both LTE and 3G?
Does anyone know what could be wrong?

Edit: I just tried this again just now. I'm on 3G, and it sent the messages just fine. I was always on LTE when the messages failed, though. I will try it again when I get in LTE coverage in case it has been resolved since my findings.

Edit: My iPhone connected to LTE, so I tried it again, and it failed to send the same message that successfully sent earlier today on 3G. This is bizarre! Due to this, I think it can safely be assumed that it's not an issue with 64-bit iOS 7, because otherwise, it would have failed over both 3G and LTE. This is because iOS simply sends the SMS as the same sequence of PDU data to the baseband regardless of which wireless technology it's using, and the baseband handles everything else from that point on. I have updated the title and content of this question to reflect this newfound information.

Edit: The contact in the screenshot above named Ryan has an iPhone 5 on the same carrier. He's connected to the same Sprint LTE tower as me. We tested it, and he could send 148-character messages to me, but I could not send them back. (This should be assumed, but I'd like to state that I make sure that iMessage is turned off during all of my tests.) This leads me to believe that it's not a problem with the carrier. I'm making a cautious deduction here, but I'm going to suggest that the issue lies within the baseband firmware. Can anyone else support or confirm my hypothesis? Can anyone provide some insight into why this might occur?

Edit: Just when I though that it couldn't get any more complicated, it did. I was connected to LTE, so I thought, hey, maybe the 7.0.3 iOS update fixed it. I know that it worked earlier today at my office about 40 miles away from my home, but there's no LTE at my office - only 3G. I got home from work today, and I tried to send a 148-character message, and it failed (no luck with the update). I wanted to verify that it's an LTE-only problem, so I turned off LTE in the Cellular settings. I tried sending the message, but it failed. I turned off cellular data altogether, and it still failed. For some reason, and only on my iPhone 5s, when I'm on the tower near my home, I can't send and SMS that contains 148 or 149 characters. Now geography comes into play. Wow, this is getting out of hand. I have no idea what to make of any of this, but it's truly annoying. It's only happening for me, even though there are other people in my home on Sprint, and they can send the same messages just fine. It would be one thing if it only happened every once in a while, but it's 100% consistent and reproducible near my home. I even drove 10 miles away, and it still failed. Who would I even go to for support or a resolution in this situation? Sprint? Apple? The Midi-chlorians? I'm completely lost here.

Update: I just went through my tests again, and I've confirmed that this is still occurring.

Update: I recently moved uptown, and it hasn't been occurring here. Next time I'm back near my old place, I'll test it again to see if it's just that I'm in a non-issue location or that Sprint has fixed it.

It looks to me like your texts are approaching a length where the phone needs to send a concatenated SMS. Judging from your success with 3G and not on LTE I would guess at this being an operator problem with supporting concatenation on LTE in some scenarios.

EDIT: The test you ran with your friend connected to the same tower obviously puts this to some doubt.

Was having some SMS message sending failures and came across this post. I have a Samsung S3 with android 4.3 with Sprint service and can confirm that messages with both a 148 and 149 characters fail consistently. 147 and 150 character messages send with no problem.

This makes sense as in the past I would edit or manually split my messages with success but never understood why that worked. Pretty annoying but at least there is a workaround by just adding or deleting a couple of characters by looking at the character counter or on failed attempts.

I can reproduce this problem exactly on a Sprint Galaxy Note 3. Whenever my message contains 148 or 149 characters, it fails with "code: 34" and "Network not responding".

Try send it as a Multi Media Message which allows more than 140 and see if that works.

Not the answer you're looking for? Browse other questions tagged ios sms iphone .

1
iOS 7 Messages app reverts from iMessage to SMS at random
0
iMessage on iPad: how do I know when the message is an sms or not?
2
How can i get delivery confirmation for sent sms?
1
I selected to send SMS instead of iMessage to a contact once, and it won't switch back, Why?
1
Send SMS/text messages from Windows through USB + iPhone?
1
iPhone no longer sending messages as SMS when recipient is disconnected from data
12
How to remove Your carrier may charge for SMS Messages used to activate FaceTime
6
Replace Messages app with something else and have it use my phone number?
2
Why are some SMS-recipients reachable through iOS but not macOS?