I find myself running some long scripts/commands and I don't want to wait looking at it until it finishes. On the other hand, I would like to know right away when it ends. I know you can do the trick with &&, but it seems like a lot of typing.

Is there a way to do this by actually putting a post-execution hook in bash? I know this is Bash related and not so much OS X but maybe there is something hidden in OS X.

There's no post-execution hook, only a pre-execution hook: if set, the value of shell variable PROMPT_COMMAND is executed prior to issuing the prompt. See man bash for details.

An option would be to create a function that tells Terminal to beep after the long command is run, so you know when it finishes. Such a function would be:

Your script will be automatically launched after Terminal makes a beep.

Use the function to run those long commands like this:

You can add the function to your .bashrc file to avoid defining it every time.

If you're not a fan of audible bells you can tell Terminal to flash instead: 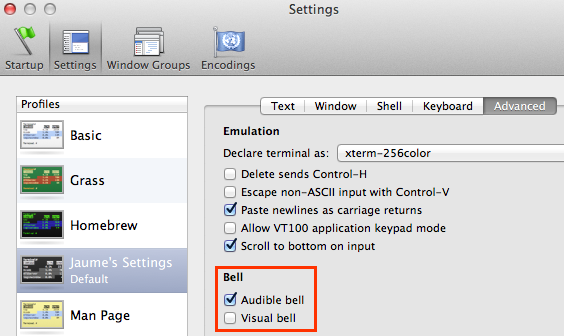 Not the answer you're looking for? Browse other questions tagged bash command-line iterm .

2
Need a bit of help running a couple lines of bash in applescript. Maybe straight bash is best?
3
Launch a bash script from the dock
1
In iTerm, why is a command shell's command not picking up things on my $PATH?
1
command not found for shell script
1
Percent character breaks Terminal
2
Why does my iTerm2 launch with an X in it's path?
1
Command in bash shell script to find path to that script?
0
Certain Commands are not Found in Catalina's Zsh