I'm replacing the RAM in a 2011 MacBook Pro, something I've done before on other machines. I got all the screws from the back case off apart from one that sits in the corner on the end by the screen hinge.

After trying with a variety of screwdrivers I cannot get the screw undone, and have now stripped the head of the screw. Any ideas how I can get this screw out?

Whichever method you follow, be very, very careful. The worst case scenario may require drilling the screw out.

Try placing a wide rubber band on the screw and use a slightly bigger screwdriver. Instead of a rubber band, you could also try with a piece of cloth (anything that can provide more grip and change its shape a bit).

For other methods, see The 12 Best Ways to Remove Stripped Screws.

This is what i ended up doing, after taking it to the apple store and them battling with it for an hour to no avail - i tried this approach listed on IFIXIT - which didnt work out entirely to plan, but still achieved a similar result.

I bought off amazon this Dremel but the cutting disks where to large for the screw, after searching for fine metal cutting disks i decided that id just use the stock one that came with the Dremel, which i believe is for wood, but anyway.

My approach was to grind away the head of the screw which worked pretty well, what you've got be careful with is the heat this will make and also the vibration so do it in tiny 1 second bursts and let it cool each time, after about 10 or 20 little bursts i grinded away the screw head and most of the surrounding laptop case (i purchased a replacement online prior to doing this as i thought i might break it seeing that the screw was countersunk).

Either way i did this and got the case off, replaced the RAM, screwed down the new bottom cover and booted up the machine.

The only downside in the long run is that there is now 1 screw which cant be removed, as it dosnt have a screw head, but its only 1 of 10 so i dont think its that a big deal.

Be warned though this is a last resort, and not to be taken lightly, i really wouldn't recommend it to any one as the likeliness of breaking your machine is very high, i think i just got lucky.

Heres a pic of the screw after being ground away, as you can see the head of the screw is no longer there and you can just lift off the case. 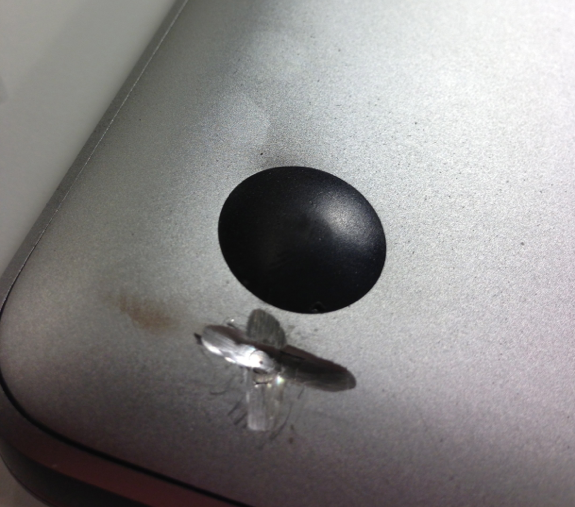 Not the answer you're looking for? Browse other questions tagged macbook-pro hardware .

2
Macbook 3 Bleeps on Startup
1
MacBook Pro retina, hardware repair - advice
1
MacBook won't boot from internal SSD
0
Worn out (stripped) screws in Macbook Pro - how to remove?
0
Is it possible to have pixelated graphics on a MacBook Pro due to a defunct trackpad?
0
MacBook not recognizing Wireless N USB Adapter
3
How to do SMC reset when keyboard is not working?
3
Mid 2011 iMac 27'' won't boot - 3 beeps and maxed fans
0
Macbook Pro 15inch mid 2010 won't detect internal hard drive