I used up all the space on my 11 home screens with apps, then installed another app (which can only be found through search as it's installed 'offscreen'). To make more space, I put a lot of different apps into folders.

How do I restore the hidden app back to a home screen?

If I reset the home screens then my folders are lost and an app will be off screen again, and I'd be back to square one.

There's actually an easier way to do this, and it doesn't require connecting to iTunes.

If you have extra space on a screen, as it sounds like the OP had after arranging their apps into groups (folders), all you need to do is to reboot your phone, and the app will reappear in one of the blank spaces on the screen.

You can use either a soft reboot or a hard (RAM) reboot to do this, so it's as complicated as turning off your phone and turning it back on again.

If anyone would like to test this, I have a known, reproducible bug in iOS 6 for throwing an icon "off-screen" that I can share.

You can rearrange your applications from within iTunes and then Sync.

Connect your iPhone and open iTunes, then click on your phone and then Apps: 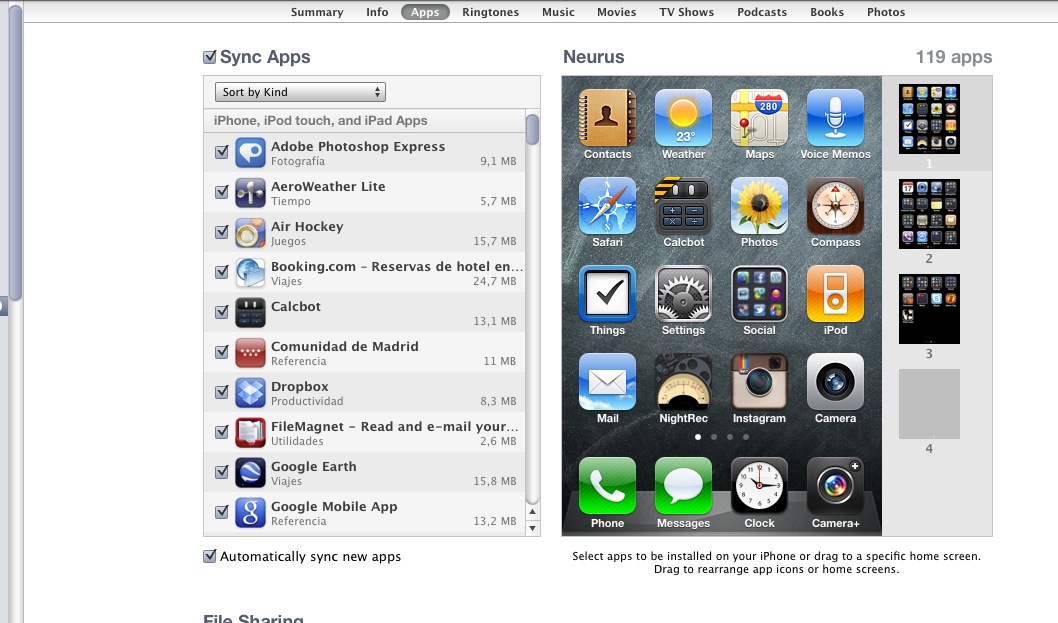 Organize apps into folders with drag-and-drop simplicity. Get faster access to your favorites and browse and manage thousands of apps.

If you don't have any critical data in that app, the easiest way to do this is probably to uninstall it (uncheck it in the Apps list in iTunes under your iPhone, then sync) and reinstall it (recheck it, resync).

If you grouped enough apps together for create a blank page in the middle, the iPhone will condense the pages bring all the apps over one page.

It might sound stupid but sometimes when you re-load your new iPhone the apps get put on the farthest screens while your second screen might only show an app or two. Swipe over and your apps will be there.

Creating a space on the home screen where the app disappeared and then turning off my phone worked perfectly. The missing app was right there. All good

Go into the App Store, click on Purchases at the top of the page, and you will see all the apps you ever downloaded. Click on any of these to restore the selected app's icon to your home screen.

Not the answer you're looking for? Browse other questions tagged iphone ios .

0
iTunes refuses to Restore home screen arrangement from Backup
0
Where do my apps go when I run out of screen space?
1
Having trouble restoring backup of my iPhone
0
Can't download apps on my iPhone
2
How to quickly screenshot all apps in all screens & folders?
0
IOS 12.1.4 - Apps bugged, can't delete or reinstall
1
Why does the News app lose the article you're reading when restoring
1
Finding hidden apps on home screen iPhone XR