Remove seconds of silence at end of GarageBand exports

Whenever I export a song to disk from GarageBand, it automatically adds a few seconds of silence to the end.

I don't want that silence, as the files I'm exporting are sound effect mixes to be played manually one at a time. I know that I can go into Audacity and manually remove all of the silence at the end, but I'd rather avoid spending that much time cleaning up after GarageBand.

Is there a way to tell GarageBand not to add silence to the end of tracks it exports?

As far as I know, GarageBand doesn't add anything to the end of exported tracks, but it exports as much as there's sound in any track. Therefore, to avoid having extra "stuff" exported, you should always create a loop region and export with that. As you can see in the following picture, I'm at second 47 in the "timeline", however, I've created a region (the yellow bar on top) that starts at second 1 instead of 0, therefore creating a 46 second clip.

The exported version can be seen in quicktime with a length of 46 seconds, without any extra silence or sound. 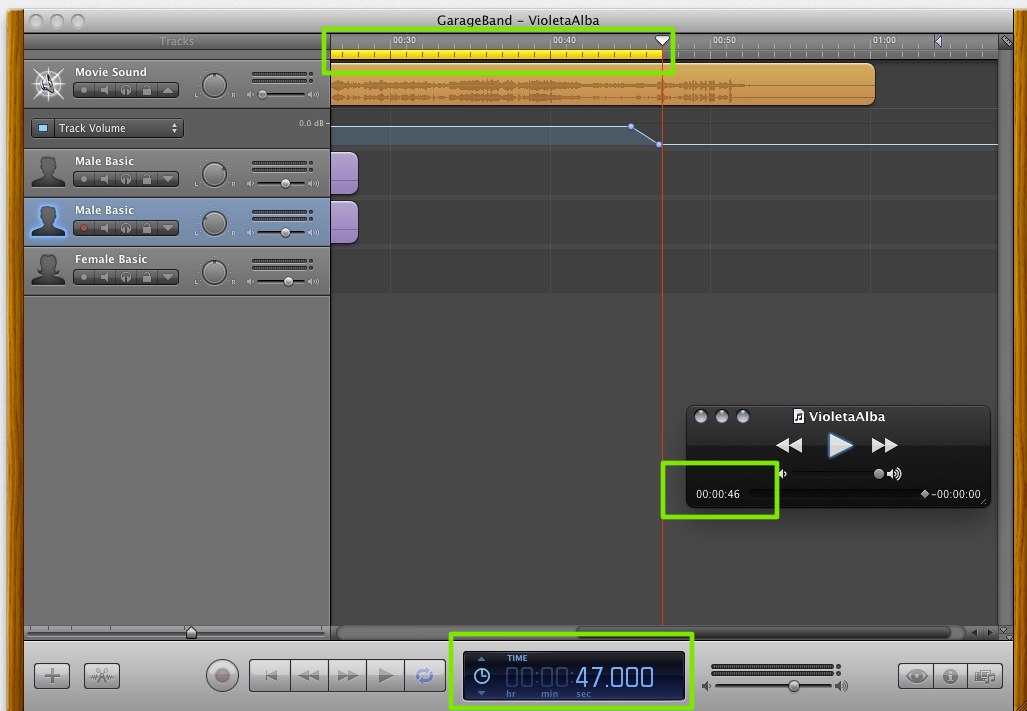 In order to create such region, you have to activate the "repeat/loop" (next to the Play button in GarageBand). That will create an extra space below the Beat Bar (where you move the Play Head). When you hover your mouse over that small region, the cursor changes. You can click and "drag" to paint the yellow zone. That's the zone that will be repeated over and over.

Always export with a repeat/loop zone created and Garageband will only export that.

I don't use macOS anymore but if you want to do this on iOS or iPadOS, if I don't incorrectly recall, your only choice is to have a region that encompasses the part you want to export, tap it (to select it), then tap it again (to see a floating set of buttons), and pick "Loop". I don't know/think there's a way to do the same "playback region selector" on iOS. I may be wrong, but this question was about the OS X version of GarageBand so I don't know more :)

In further detail, in order to see the cursor change, start at the beginning of the track. In Garageband 11, the loop region icon is located next to the metronome.

Also the "Include Audio Tail" switch on the bounce page in LPX determines whether the long tails of reverbs are added at the end of the file.

Not the answer you're looking for? Browse other questions tagged music mp3 ilife garageband .

14
How do I remove GarageBand?
0
Export from garageband to audacity
1
Remove silence from end of GarageBand track
1
How can I convert my GarageBand tune to an mp3 without the static noise increasing?
0
In GarageBand iOS, does the “Optimizing Performance” operation induce an irreversible degradation of recorded signals?
1
Garageband - Remove Dead Space at End of Track
1
Mix two audio tracks - stretch one to sync with other