Is it normal for iOS updates to fail or to take hours on launch day?

After just accepting the iOS 7.0 upgrade dialog on my iPad, the gears spin for a moment and it looks like the download will start, but then the install fails. 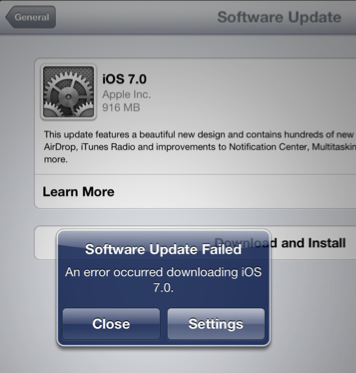 Is this something I can fix?

This is quite expected for several hours (and sometimes even a day later at popular times like first thing in the morning) as Apple tunes the servers that host the download images. Usually, things smooth out several hours after the launch and if you have this issue for more than a day, I would contact support just in case it's your device that is having problems.

Even more important than the download servers are the activation servers that verify the software wasn't corrupted or tampered with as they seem to be preventing many people from updating even after the software is downloaded and installed on the device.

It's not unrealistic that thousands or even a million devices are all asking to download the files at the same time, and if you wish to get a good download here are some strategies:

Hopefully, enough servers are available so that this isn't "normal", but even on a fast connection to the internet you might have some delays in upgrading on launch day.

I got the same on my iPad initially. I just tried it again and its seemingly working fine. I'm guessing it's a glitch.

On my iPhone I got a notice that I needed to free up some memory before I could download. Bu-bye Garmin North America map!

Not the answer you're looking for? Browse other questions tagged upgrade ios .

1
iPad 2 is dead after failed upgrade
1
iTunes storing iOS updates for later
1
How to clear up space on 16GB iPad for iOS upgrade?
1
Installing specific iOS version on iPhone 4S
4
IOS Upgrade Downloading for every device
0
iOS updates and iCloud
1
Can I upgrade my iPad 2 to iOS 9 after the release of iOS 10?
8
Does iOS download iOS updates when using a hotspot?
5
Stop iOS auto-downloading updates