This Apple support article, MacBook Pro: How to remove or install memory, says that the maximum memory on a MacBook Pro 13-inch is 8 GB. Is that a hard limit? Why could I not install a 16 GB memory stick in there? Would it work, but only for the first 8 GB? Is there any way around the limit?

The 8Gb limit seems to be an Apple supported limit, but many people happily report getting 16Gb working fine - see the memory section in the link as well as this page for details.

The "Early 2011" and "Late 2011" MacBook Pro models use faster 1333 MHz PC3-10600 DDR3 SO-DIMMs. They officially support 8 GB of RAM, but OWC has determined that they actually support 16 GB of RAM regardless of the operating system installed, although only the "Early 2011" MacBook Pro models are capable of running a version of Mac OS X 10.6 "Snow Leopard."

I have doubts a 16 GB setup would work. I installed the Crucial scan, and this is what it says:

Ok, that's understandable to have a disclaimer like that, but this was what it said next:

"All memory and storage is soldered on-board." wha-wha-what!? 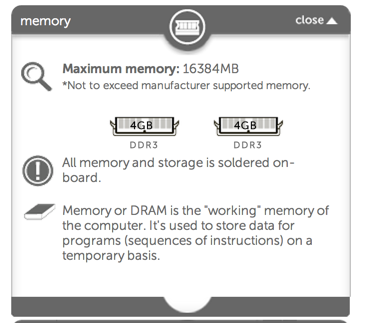