I'm using iTunes on Windows and I have my Music Library. Recently I added some music (Mafia II soundtrack I purchased with the game) to the local iTunes Library, but the neither the Artist, nor the Album turn up in the Music Sync overview. Can someone tell me what might be the issue here?

Edit: The Soundtrack in Question is the Mafia II Soundtrack acquired through the Digital Deluxe Steam Version. The Files are all in MP3 Format and to my knowledge properly tagged.

I primarily tried adding it by hand (dragging it into iTunes) and by adding them via the Add Folder/File to Library buttons. I disabled iTunes ability to manage the folders itself, as that is a behavior I do not want.

However, now, after removing and readding the tracks to the library several times, the Album itself ("2K Games - MAFIA II Official Orchestral Score") appears in the Album overview of the Music Sync menu (and there only). When looking for the ID3 Tag of the Genre ("Soundtrack") or the Contributing Artists ("2K Czech / FILMharmonic Orchestra Prague") and Album Artist ("2K Games"), nothing can be found. This changes my initial question to a small extent, but the problem, in a way, remains: It can't be found in 2 out of 3 overviews of my iTunes library.

If you manually added the music to the to the local folder then you need to "re-sync" your iTunes library so that the music appears in iTunes application.

Just choose "Add Folder to Library" and choose your iTunes music folder so that it "re-syncs" your library and ALSO adds all the new songs to your list as well. 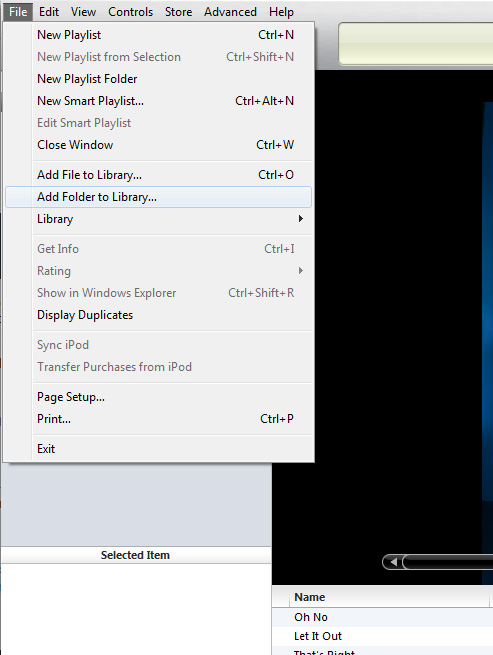 But all of this is irrelevant until you tell us how you added the music to your computer???????

It could be a codec issue and, if that's the case, you'd need to re-encode them to an accepted format (basically: mpeg, wave, aiff and apple's). But that usually comes along with an error message once you try to add it or play it on iTunes.

If you can actually play the music on iTunes only, but can't sync them to iPhone, most likely you have an issue on the phone, which usually is solely related to lack of free space.

Not the answer you're looking for? Browse other questions tagged iphone itunes data-synchronization music library-management .