I have downloaded an application, the link to which is currently on my desktop. It is actually a *.app file, which I'm assuming is a shortcut to the file? I want to get the shortcut onto the tray of icons at the bottom of the screen. I'm familiar with linux/unix. Is there a way to mv the file from the desktop where it is to the tray of icons at the bottom? I'm not sure what the path is.

Previously, I tried dragging it onto the tray, then deleting it from the desktop, but when I tried to then run it from the tray, it said it was in the trash.

In OS X to "properly" install an application, just take the .app file a drag in into your applications folder using the Finder (due to localization the Application folder in the Screenshot is named Program..., but the icon is the same) 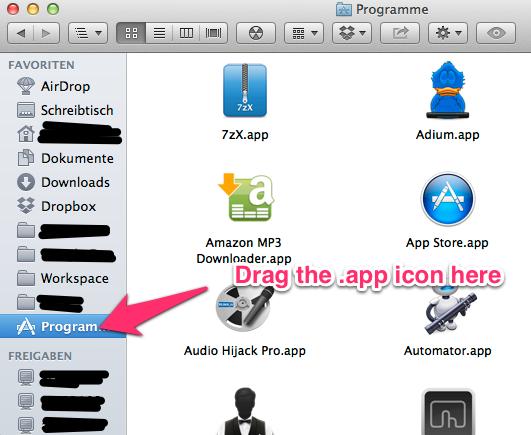 When you then launch the application it will appear in the dock (the "tray of icons"). Right click the icon and and choose "Options" -> "Keep in dock" and it will stay there for quick launching. You can also move it around in the dock if you want to have it in another spot.

Firstly, @cyphorious has the answer you need, but I'm going to add more details to help expand your understanding of Mac terms.

Firstly, the .app file that is on your desktop is the actual application, not a link. Think of a .app as being roughly equivalent to a .exe (the main difference being that a Windows .exe file is a single file that will no doubt require a bunch of DLLs and other supporting files that it will expect to find either in your windows/system32 folder, or in the same location as the .exe itself. A .app looks like a single file, but is actually a collection of files and folders that is just treated differently so an app can be identified and moved/copied/deleted as a single file, rather than having to know which files and folders combined make it up - it's essentially a bit like a zip file that doesn't need unzipping to access the contents).

The tray of icons at the bottom is the dock. Nothing lives in the dock permanently, anything there should be a shortcut or link to the actual file that is expected to reside elsewhere. In this way, when you remove an app from the dock, you are just removing the shortcut, not deleting the actual app.

So the key to getting the shortcut working in the dock is to move the application to where you want it, then either start it and tell it to stay in the dock, or drag it to the dock from its new permanent location (usually the applications folder as per @cyphorious's answer, but could be on an external disk etc).

I would like to add one clarification to @stuffe's excellent expansion on @cyphorious's answer. This is something I see happen a lot, both on long-time Mac users and adopters who come over from other systems.

@stuffe states: "Nothing lives in the dock permanently, anything there should be a shortcut or link to the actual file that is expected to reside elsewhere."

Mac uses this strategy a lot. The same goes for icons in your sidebar, and on the task bar. And numerous other applications on your Mac.

Example: in iPhoto, only the photos in the Library are the true photos, and therefore can be truly deleted. Photos put into albums appear like the real photo, but really the albums are just an organizational method. Deleting the photos out of the albums does not delete the photos, it just deletes their organizational reference, or shortcut, within the album.

Not the answer you're looking for? Browse other questions tagged macos desktop .

3
Workflow for dealing with incoming files to keep the file system tidy?
13
Single desktop image for all desktops
2
When saving files to Desktop on Mac OS X (Lion), why are they placed in an erratic order?
4
Why can't I change my desktop background?
5
How to run a bash script from the desktop?
13
What is the icon on the desktop after I install an application?
2
How do I create a shortcut on the desktop?
2
How to prevent macOS from putting icons on some areas of the desktop?
0
How can I figure out why Applications will NOT add to Dock?