I'm trying to launch meld (installed via Homebrew) via an app shortcut, ideally ending up in my Applications folder. A recommended way to launch console apps in Mountain Lion seems to be using Automator.

Running /usr/local/bin/meld in a terminal starts XQuartz and meld launches fine. My Automator script looks like: 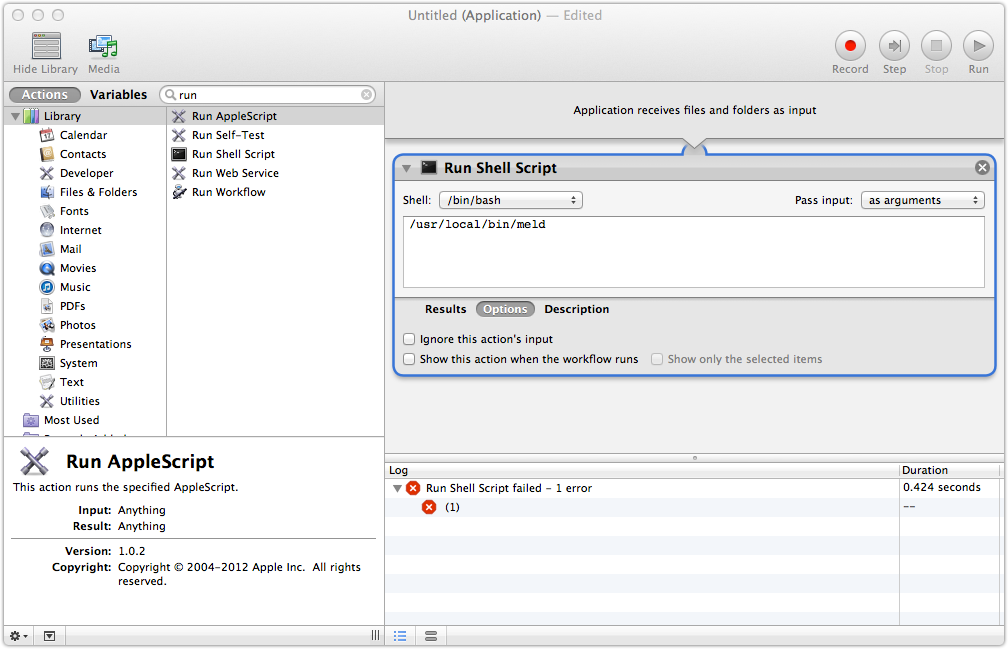 But when running all I get is the 'Run Shell Script failed' error. XQuartz doesn't launch. If XQuartz is already running meld still doesn't start.

Edit: I can get it to work by using open /usr/local/bin/meld in my action, but I then also get a Terminal window (which I don't want).

Aha. Looks like Homebrew wants to run meld via it's own Python, rather than the system one. Terminal sets this up correctly, but obviously Automator doesn't.

Solution: use Run Shell Script in Automator with:

Not the answer you're looking for? Browse other questions tagged automator homebrew x11 xquartz .

3
Create a automator application able to launch and quit from dock
1
XQuartz is not starting from within tmux
0
Changed my PATH to have /usr/local/bin ahead of /usr/bin and now pip isn't found
1
How to quit multiple application on mac using an automator app?
2
Use Automator to open app as itself?