How to make an existing AppleScript file to work as a service?

I made an AppleScript, saved it as a file in a specific folder on my hard drive. Now I want to assign a shortcut to it and looks like I have to make a Service via Automator, but the Run AppleScript asks me to put the code inside, while I want to execute the already existing .scpt file. How to do that?

Yes, Automator is the best option here. To create the service follow these steps:

If you ever want to get rid of the service open ~/Library/Services, delete the service and empty the trash: 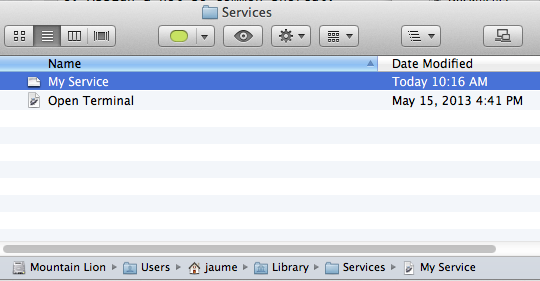 In the script, add an on run argument:

Then you can use the Automator "Run Shell Script" action, with the osascript command:

alexwlchanalexwlchan
2,51711 gold badge1515 silver badges2828 bronze badges
2
Add a comment  |
3
Want to improve this post? Provide detailed answers to this question, including citations and an explanation of why your answer is correct. Answers without enough detail may be edited or deleted.

Perhaps you'd want to take a look at This Service, which allows you to "create Mac OS X services from any script."

See this answer for other ways to assign keyboard shortcuts to scripts. I use FastScripts and Alfred myself.

You can RUN the existing script with a simple automator service like this. And assign your shortcut from within the keyboard short cuts as normal. Just remember some applications may need to be relaunched before they pick the shortcuts up.

Which in this example uses:

The Action is a Run Shell Script The code just uses the unix command osascript and the path to the file. Pass input can be to stdn or to argument

Thats it nothing special needs to be done to the script.

For further details on the osascript command look at the man pages for it. The man page give another example where you can pass arguments to the script.

To develop a Service, you need some sort of software which will create a Service such as one of the following:

All of the above kinds of services are packages. They are all folders which contain an plist that specifies the attributes of a Service.

Here is how I created a Service using Automator that uses a "Run AppleScript" Automator action to call an existing .script. 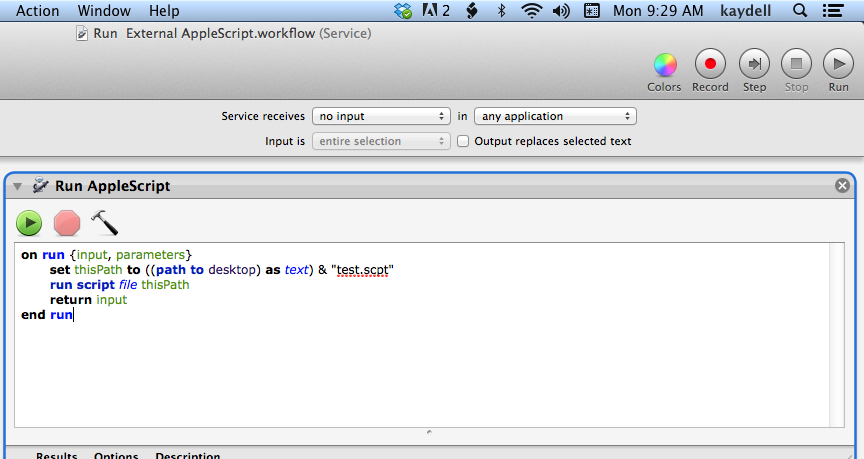 Not the answer you're looking for? Browse other questions tagged keyboard applescript automator .

1
In automator, apple claims you can create a dialog with a progress bar. Is this feasible or outdated?

3
Passing selected folder path to custom Service executing AppleScript
2
Create a service using Automator to compile .tex file in Mac
2
Applescript Move current file to Folder
2
How can I use AppleScript to see if a specific line of a .txt file matches a variable?
3
How can I restart a currently-running application with AppleScript?
3
How to call a specific subroutine of an AppleScript from another AppleScript?
3
Seeking script to add to my automator service to make it reveal newly created item in finder
0
How do I transcribe an AppleScript?
0
How can I make Automator run service I made (shell script) and display the output in Terminal?